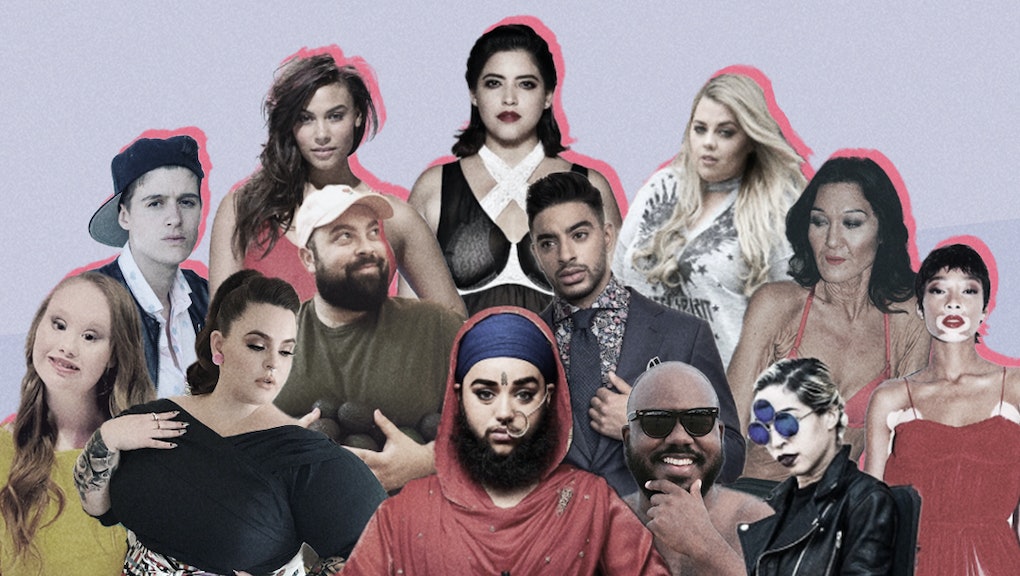 Fashion designer Prabal Gurung was headed to Germany in preparation for Berlin Fashion Week last winter (where his eponymous brand shows its resort collection, an inter-season line of ready-to-wear clothing) when he was sent a runway packet filled entirely with images of white models. “I said to them, ‘Can I have diversity here?’” Gurung recalled during a recent talk at Instagram headquarters.

They sent him one model.

The designers who frequent Berlin Fashion Week may not be asking for diverse models to grace their runways in large numbers, but the demand for representation is large and growing — just look at the #OscarsSoWhite movement or even the demand for more emoji diversity for proof of this. And that, according to Gurung, is where Instagram comes into play. “The ideal of beauty is no longer controlled by a few people who are deciding it,” he said. “Now it is represented by all of us; who we follow; what we want the world to look like; all of us are responsible for it.”

The gatekeepers of “capital-F fashion” — Céline, Prada, Gucci, Saint Laurent, etc. — surely remain. But thanks to Instagram, fashion inclusivity, and by extension the concept of a standardized beauty ideal, is beginning to slowly but significantly widen. No longer are fashion images relegated to glossy bibles; these days, the people who once consumed these images as outsiders can also be gate-openers that help reshape and broaden who gets to participate.

Take Cinta Tort Cartró, who used Instagram to reimagine stretch marks as painted rainbows. Or models like Kelvin Davis and Shay Neary, who have helped ungender the body positive conversation. Or Sara Geurts’ proud display of her Ehlers-Danlos syndrome, a connective tissue disorder that affects the way collagen is processed. Even celebs like Alicia Keys have gotten in on the action. In June 2016, Keys launched her #NoMakeup movement — a hashtag that is now populated by over 14 million makeup-free images from around the globe.

Even those not actively participating in efforts to vary the beauty we see in the world are inundated with diverse images of it thanks to Instagram’s explore tag (which gets over 100 million visits daily). While diversity numbers both on the runway and in campaigns can tick up significantly with the addition of one single model of color, or a plus-size model or a transgender model, Instagram easily torpedos these metrics to show a shifting landscape that fashion has long been too high-chinned to include.

“I was on the cover of Italian Vogue in 2011 and Instagram was around but it wasn’t a huge thing then,” model Candice Huffine, who’s fluctuated between a size 6 and a size 12, recalled during the fashion talk. “In the past, it was that you had to wait for your big moment in order to share your message, and with Instagram I’m finding the beauty of it is that people can start sharing their message immediately. You don’t have to have your big break yet or be on the cover of a magazine to share and inspire.”

“It helps the young girls watching to have so many more people to identify with,” Huffine added. “She can single out the people that empower her and follow and watch what they’re doing. And that is never going to be a bad thing.”

Fashion as an industry is beginning — albeit slowly — to take notice of the changes. “It has been traditionally this industry talking to an industry, but with things like Instagram, brands have to talk to the world,” Trey Laird, founder, chief executive and chief creative officer of Laird+Partners, a creative agency specializing in fashion, beauty and luxury markets, revealed during the talk. “The whole notion of what aspirational is has changed” he added. “It’s different in the world already, maybe not different in the industry yet, but that’s the industry’s problem and they’re going to have to catch up to the world.”

Laird admitted that the industry on the whole has been struggling. “[The industry] has found itself in a little bit of an irrelevant place because the world has moved forward — both good and bad — and fashion has been stuck.”

“There’s a lot of other things going on in the world that are bigger, and so fashion needs to take a step back, look at what’s going on in the world, and say, ‘Why aren’t we moving the conversation forward?’” he explained. “I don’t think it’s as influential as it maybe was a few years ago. I don’t know that it’s the epicenter that it potentially can be.”

Is the notoriously elitist fashion industry perhaps willing to bend? “If you think the decision-making table is not representing who you are and you still think change is going to happen, you’re delusional,” Gurung, who uses hashtags like #FemininityWithABite and #BeautyWithSubstance on many of his brand’s posts, remarked. “The change will happen when Céline, Prada, Gucci, Saint Laurent — when they start prioritizing diversity. It starts in Paris.”

It might sound hopeless that the social media alone could affect campaigns or the runway — but not so fast. In the last two seasons alone, when certain designers whitewashed their runways, they were called out by folks not asking for change, but demanding it. When Melania Trump wore Dolce & Gabbana, the brand’s Instagram was littered with commenters voicing their disappointment. “The LGBT community have been fighting so hard against these people for their rights,” one commenter wrote. Such comments are seen not just by others — but by the brands themselves. (In the case of D&G, Stefano Gabbana has no problem firing back at critics.)

There’s even proof in numbers: Shannon Coulter’s #GrabYourWallet campaign has seen over 40 brands cut ties with the Trump family, announcing they would no longer sell their stuff as a result of consumer pressure.

“It’s time to burst the bubble,” Huffine said. “Fashion is no longer aspirational in the way it used to be seven to 10 years ago. Now it’s about raw reality. Let’s have fun with that, let’s explore that, because it reaches more people.”

Gurung summarized it best: “I want to ultimately live in a world where this conversation is no longer, it’s just the reality. Success, platform and privilege is given to you to test your character. What are you going to do about it? How are you going to use it?”