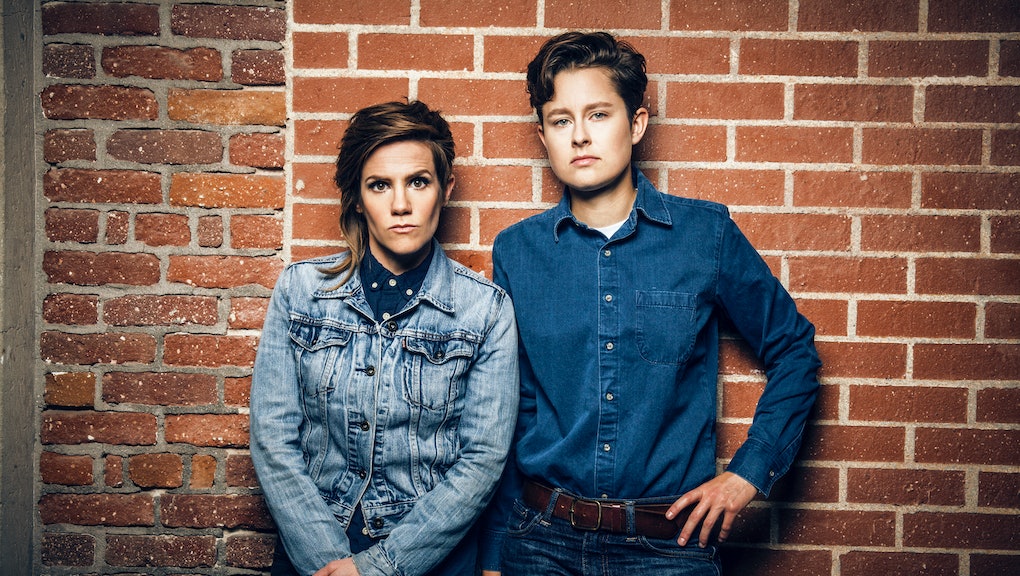 Rules of the Road: Cameron Esposito and Rhea Butcher talk travel before a cross-country trip

It’s not easy to be business partners with your life partner — especially when that business is show business. And getting along with any travel partner on a cross-country road trip is no minor accomplishment. So co-comics and wives Cameron Esposito and Rhea Butcher are embarking on a major feat as they prepare for a month-long bus trip to 19 cities across the United States for their Back To Back Tour.

Before their hilarious odyssey kicks off in Seattle on Sept. 21, the Los Angeles-based couple (you know them from Take My Wife and their weekly comedy podcast, Put Your Hands Together) spoke to Mic about getting ready for their road trip, the places they’re most excited to see and the best road snack.

Mic: What’s it been like to prepare for a cross-country tour?

Rhea Butcher: It’s been a nightmare. No, we’re trying to figure out what books and everything we want to take on tour. But I’m really excited to go on this bus tour with my wife. We toured together for like three years straight and took a little bit of time off to make our show, Take My Wife, so we’re really excited to get back on the road and do standup again and see people all around the country.

Cameron Esposito: Our dog! Also, Bluetooth speakers and some skincare stuff, because I’m stressed out about living on a bus. Some allergy medication for Rhea. Shorts because I’m hot all the time.

RB: And Best Made Co. is sending me an ax for my birthday, so I think I might bring that.

CE: How are you going to get that to Seattle?

RB: I’m going to figure out a way.

What are you planning on reading and listening to?

CE: I’ll be listening to the Call Your Girlfriend podcast, which I really like. We’ll also be pumping Tegan and Sara — classic tour jams. I’ll bring at least one of my copies of the movie Carol. And I’ll be reading the new David Sedaris [Theft By Finding].

RB: I just got a new book by a writer name David Giffels. He’s from Akron, Ohio, which is where I’m from. I read his book The Hard Way on Purpose, and really loved it so I’m reading his other book about Akron [All The Way Home].

CE: Also, I have to pick up Roxane Gay’s Hunger before we leave, because I haven’t read it yet.

Are there any road games you like to play?

RB: I want to get a PlayStation 4 and play MLB The Show as a road game but I don’t think that’s going to happen. Do we have road games that we play?

CE: It’s called “Fighting About Everything Because We’ve Spent Too Much Time Together Dot Com.” It’s a pretty fun game and a lot’s on the line there.

Do you have any favorite road snacks?

RB: The weirdest road snack we both like is Corn Nuts.

CE: I don’t think that’s weird at all.

RB: All of a sudden when you’re on the road, Corn Nuts seem healthy, I think because they come in a small package and you can just eat 10 of those small Corn Nuts and you have to eat them carefully or else you’ll need dental work done on the road. So that’s kind of a game, too! How many Corn Nuts can you eat without breaking your face?

CE: I’ve been known to get desperate and eat gas station hard boiled eggs. Rhea gets really upset about this but I’m sorry, I’ve got to do what I gotta do. I also eat a lot of gas station string cheese.

RB: We’re both vegetarians so the really intense [gas station] stuff like the twirling meats, we can’t eat that. Well, we could, but we don’t.

Which cities are you particularly excited to visit?

RB: I’m excited to visit all of the cities because I love visiting new places and old places. I have two cities I’m most excited about: Cleveland, because that’s my hometown adjacent town and New Orleans, because I’ve never been. It looks beautiful, vibrant and I’m excited to see it.

CE: I’m really excited to go to Chicago, my hometown, and play the Vic Theatre, because that’s a huge venue. And I was going to say New Orleans also because we’ve never been there together. Or separately!

What are you looking forward to doing in your hometowns?

RB: In Cleveland, I’m really excited to go to Tommy’s, that’s one of my favorite restaurants. It’s like a hippy vegetarian place, that’s been a staple — my parents went there when they were younger than me — so it’s a fun spot to go to to people-watch and hangout.

CE: We also end the tour two days before my birthday, so I’m assuming that Rhea will be buying me lots of birthday dinners at all of the cities we’re in. Madison is our last tour date, so, oh man, they better have lots of jewels in Madison that you can buy for me.

RB: I thought you meant the [Jewel-Osco] grocery store.

Is there a city you’re not performing in that you wish you were included on this tour?

CE: After this specific tour we also go to Boston, Denver and Portland, Maine. But when you look at a 22-city tour — it ends up being great, and it flows so well — it looks like so much talking into microphones. But it’s the best job. Personally, I’d like to take a vacation to Alaska when we’re done. That will be November, which is like the perfect time to go to Alaska.

How do you think the regional divisiveness of 2017 will impact your tour?

CE: Right now the political climate is so stressful that it’s really hard to do standup right now.

RB: Straight up, it is. Things are changing on a minute-to-minute basis. It’s a dark time for a lot of us and I’m excited about the benefit of being on a bus and being on the road and speaking to such a large group of human beings face to face. Because we certainly have friends and a community here in Los Angeles, but one thing people don’t talk a lot about touring is that you get to meet your fans. Those are people with jobs and families who live all over the country and right now I think what we need is to feel connected to each other. I’m really excited to meet the people who come to our shows and for the people who come to our shows to have community with each other.