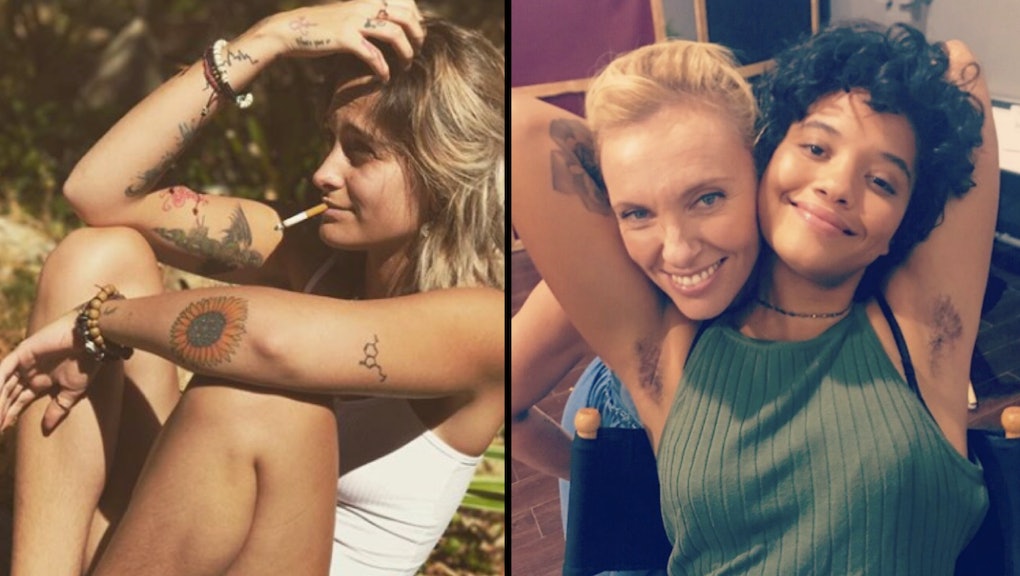 Paris Jackson and Kiersey Clemons would like you to know that body hair is natural, OK?

Two very young and very outspoken celebrities — Paris Jackson and Kiersey Clemons — are here to remind you that body hair, in all its glory, is totally natural, no matter what you haters say.

In August, both women have posted on social media to either talk about it, show it off or even defend it against trolls who invade their comment sections on Instagram. On Wednesday, Clemons did exactly this after posting a picture of herself with actress Toni Collette, with her arms stretched up, showing off her hairy armpits.

While she merely captioned the image “It’s Toni Collette bitches!!” (a good choice, honestly), swarms of people invaded her mentions to let her know what they thought about this armpit hair.

While she had her defenders, commenting things like, “It’s her body and she will do as she damn well pleases!” she also had her haters, who wrote things like “OMG shave,” “You gotta shave that boo,” and, “Why didn’t you shave?”

To that particular question, she offered a response: “Same reason you in my comments and not focused on your life. Just lazy, you feel me?”

Paris Jackson, daughter of Michael Jackson, has also taken to being outspoken and unashamed about being a human being who grows hair on her body. Earlier this week, she posted a picture with the caption: “If you’re not competing with your brother over who can grow longer leg hair [what’re you even doing]?”

Around that same time too, Jackson shared a video on Instagram that showed her friend petting her own leg hair. And even before that, she had shared yet another video on Instagram after receiving criticism from people uncomfortable with her armpit hair.

“People are really mad,” Jackson said. “I wish I could post some of these responses. You can just tell how angry and infuriated these people are... I love hair, and sweat and [body odor]. I fucking love it, I think it’s great. Some people think that it’s like super disgusting, especially on girls, but every human body does it. It’s natural. Get over it.”

Clemons and Jackson are not alone in this decision to not always shave or groom all of their body hair. According to a recent study, for most young millennial women, body hair is a non-issue. The same study also noted that one in four millennial women no longer shave their armpits, with leg shaving on the decline as well.

Ultimately, as Mic has previously written, personal grooming for anyone is just that: personal.