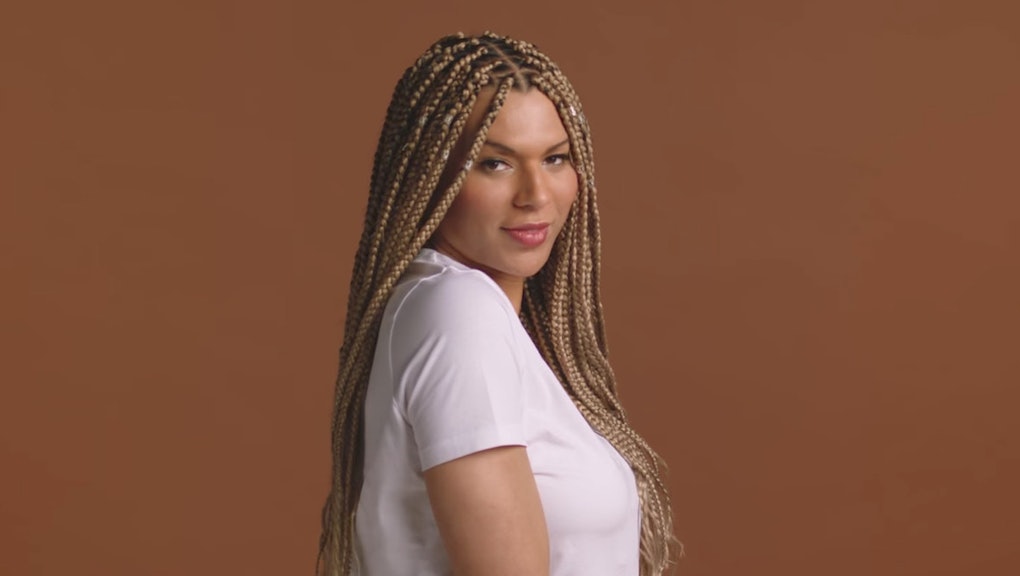 On Monday, L’Oréal U.K. made history by hiring an out transgender model as the face of one of its campaigns. By Friday, that history had been erased after her private comments about the ubiquity of white supremacy surfaced, and the company called her anti-racist comments “at odds with our values.”

On Aug. 28, L’Oréal U.K. — whose parent company L’Oreal is known for featuring a diverse roster of talent as part of its True Match initiative — first announced that DJ, activist and model Munroe Bergdorf had been cast as one of the faces of its latest campaign.

But then comments she had made weeks prior to the campaign launch, in the aftermath of the Unite the Right rally in Charlottesville, Virginia, which left one dead and 34 injured, surfaced. Bergdorf had taken to social media to sound off on what she and many others see as white people’s complicity in destructive racism.

“Honestly I don’t have energy to talk about the racial violence of white people any more. Yes all white people,” she wrote in a post on her private Facebook page, subsequently deleted by Facebook after being reported by multiple users.

Because most of y’all don’t even realize or refuse to acknowledge that your existence, privilege and success as a race is built on the backs, blood and death of people of color. Your entire existence is drenched in racism. From micro-aggressions to terrorism, you guys built the blueprint for this s***. Come see me when you realize that racism isn’t learned, it’s inherited and consciously or unconsciously passed down through privilege. Once white people begin to admit that their race is the most violent and oppressive force of nature on Earth … then we can talk.

On Friday — nearly three weeks after she’d penned the missive and less than a week after the launch of the campaign — L’Oréal U.K.’s official Twitter issued a statement announcing the end of its partnership, citing unspecific “comments,” which many believe was a reference to the now-deleted post, the brand felt were “at odds” with its values.

The backlash to L’Oreal was swift, with multiple twitter users calling out the hypocrisy of championing diversity in a cosmetics campaign while hampering those diverse figures’ ability to use their platforms to speak about their lived experiences of being discriminated against.

“Being a true ally is about listening, even if what you are hearing makes you uncomfortable,” Ruth Hunt, Chief Executive of the Stonewall organization, said in a statement issued on its site. “It is about recognizing your own privilege and giving up platforms and power, and it is about demonstrating humility and allowing people to participate in conversation on their terms, in their own language. Silencing trans women of color is no way to champion diversity, especially when speaking about their experiences. We will continue to stand by the side of role models like Munroe, working towards a society where everyone, everywhere, is accepted without exception.”

On Friday morning, the brand issued a response to the Daily Mail — which it also provided Mic — doubling down on its earlier tweet: “We support diversity and tolerance towards all people irrespective of their race, background, gender and religion. ... We believe that the recent comments by L’Oréal Paris U.K. Spokesperson Munroe Bergdorf are at odds with those values, and as such we have taken the decision to end the partnership with her. L’Oréal remains committed to celebrating diversity and breaking down barriers in beauty.”

In response, Bergdorf issued the following statement to Mic: “Sit still and smile in a beauty campaign ‘championing diversity,’ but don’t actually speak about the fact that lack of diversity is due to racism,” she said. “Or speak about the origins of racism. It’ll cost you your job.”

“This makeup brand cares about nothing but MONEY,” she added. “I urge you to boycott L’Oréal Paris. I can’t express how disappointed I am in the entire team in dealing with misquotes that were entirely placed out of context.”

Bergdorf also responded to the Daily Mail article in a lengthy Facebook response on Friday morning, noting that the website failed to put her words in context. “This ‘rant’ was a direct response to the violence of white supremacists in Charlottesville” she wrote. “When I stated that ‘all white people are racist,’ I was addressing [the] fact that Western society as a whole is a system rooted in white supremacy — designed to benefit, prioritize and protect white people before anyone of any other race.”

She also addressed L’Oréal directly in the same post, writing this:

If you truly want equality and diversity, you need to actively work to dismantle the source of what created this discrimination and division in the first place. You cannot just simply cash in because you’ve realized there’s a hole in the market and that there is money to be made from people of color who have darker skin tones.

This incident is but a blip on the radar of Bergdorf, who says she has four more campaigns coming out before the year ends. But for L’Oréal U.K., a lingering question remains: Whose diversity is really being championed here?