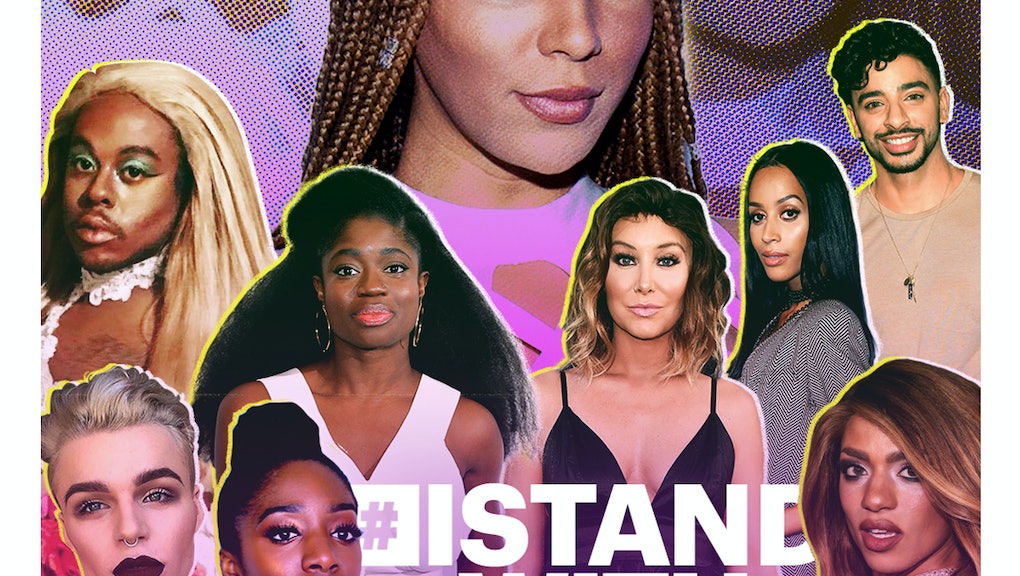 #IStandWithMunroe: Why 8 fashion insiders are supporting Munroe Bergdorf after the L’Oréal firing

On Friday, a model of color was sacked from a campaign championing diversity after speaking out in opposition to white supremacy. That decision raises a thorny question about where the fashion and beauty industry situates itself morally: Are its repeated efforts to challenge beauty norms, promote inclusivity and track diversity efforts really holding the industry accountable to any aspiration beyond back-patting?

After all, in cutting ties with Munroe Bergdorf, L’Oréal UK is setting what could be a dangerous precedent in punishing models for speaking out about issues important to them. This is especially troubling considering Bergdorf identifies as a model and activist and was speaking out about structural racism, hardly a new discussion given the current political climate.

The contextless “All white people are racist” soundbite (which she never said in her original post) disseminated by outlets like the Daily Mail only shows the calculated effort to delegitimize Bergdorf. That she had to appear on multiple morning shows to clarify this only shows the unwillingness of many to grapple with her intended message.

“Why don’t you think about being part of the solution?” Piers Morgan asked Bergdorf during a sit-down on Good Morning Britain over the weekend. “You’re causing more division.”

“My talking about racism is not causing a divide,” Bergdorf calmly countered. “There’s a divide anyway.” The remaining eight minutes were something of a master class in articulation from Bergforf, one that fell onto Morgan’s hollow ears — at one point, he even told Bergdorf she was “playing her old trick of being the victim.”

While Morgan may have a tough time grasping why Bergdorf felt her words needed to be said, many are rallying around the model’s cause, leading to the hashtag #IStandWithMunroe to trend on Twitter and Instagram.

Mic decided to chat with eight fashion world insiders to get their thoughts on why supporting Munroe is imperative. It’s worth noting that of the 60-plus emails Mic sent out to industry folks seeking comment, we received over 45 “no comment” replies.

Do with that what you will.

One of the first to speak out publicly in support of Bergdorf was fellow L’Oréal model Clara Amfo. “Not even a week ago I was proud to announce that I was to be in the same campaign as Munroe, a trans woman of colour who L’Oréal hired to sell makeup because of who she is,” Amfo wrote in an Instagram post on Sept. 1. “Who she is, a woman who wrote a nuanced post on institutional racism and white supremacy in relation to Charlottesville and how the foundations of those heinous ideals trickle in to every facet of our society. A newspaper took her post out of context and span it as ‘a rant’ with the most basic of dog whistle politics to rally people against her. ... If she’s not ‘worth it’ anymore, I guess I’m not either.”

On Sept. 5, Amfo confirmed to Mic that she had requested to be removed from all L’Oréal campaign artwork.

“I am so beyond disappointed in L’Oréal,” wrote celebrity makeup artist Spencer Claus in an Instagram post on Sept. 4. “You cannot claim to champion diversity and then silence those who make you ‘diverse.’”

In a follow-up interview, Claus doubled down on his earlier statement: “As a white and masculine-presenting individual in the industry, I’ve been afforded a lot of privileges that many of my peers haven’t. Given the current political climate, it is now more important than ever that we stand up for marginalized peoples in ever facet of our lives, including the beauty industry. The beauty industry has done better and can do better; L’Oréal UK should see by now that the decision they made in ending their contract with Munroe Bergdorf was a callous and ill-advised one and only perpetuates the Eurocentricity that has historically pervaded the cosmetics industry. Now is the time to do better.”

“#IStandWithMunroe, and again, #IStandWithMunroe,” de la Cruz said in an interview. ”Racism is a social construct in which all white people benefit from. Until it is acknowledged that this is so, the conversation can never continue in a fruitful manner. Black people do not and cannot benefit from racism, as it was created for the purpose of keeping us oppressed. It’s oxymoronic to say otherwise. Therefore, black individuals can be prejudiced, yes, but not racist. Racism is something that must be actively deconstructed. It has been ingrained into every aspect of our society. In our society, white is viewed as superior. Whiteness is status quo, while all else is other, and thus inferior. This must change in order to make progress.”

“It’s important to hear the voices of people of color, not just use us as props,” King said in an interview. “We can speak through experience with articulation, grace and passion as Munroe has. Racism is real, let’s face it, and we all have to work together to truly stop it. What a groundbreaking moment for the trans community, and [trans women of color] to see Munroe sharing her story on such a large platform, only to watch the carpet abruptly yanked from under her feet. Brown people have voices, and like the rest of us, Munroe will continue to be brave and speak up. I stand with her. We all should.”

Amaka, whose app Cocoa Swatches helps show makeup swatches on underrepresented complexions, was one of the first to speak out publicly on Twitter. “I don’t think y’all understand how risky it is for people to speak out against racism/prejudice in the beauty industry,” she wrote on on Sept. 1. “You get taken off PR lists, and people use it a reason to not work with you. It’s happened to me and many others and its maddening to see and experience.”

“I’ve always firmly believed that there must be a holistic approach to championing diversity in the beauty industry,” Amaka said in a follow-up interview. “It’s not enough to simply add people of different complexions to an ad campaign and call it diversity. It must be embedded throughout a company’s culture to be true and genuine. By dropping a spokesmodel for speaking out against systematic racism and white supremacy, L’Oréal UK is actually doing the exact opposite of their latest campaign posits they stand for. This is why #IStandWithMunroe. Actions speak louder than words. And as Munroe stated in a recent interview, inaction makes you complicit in the structural discrimination that is embedded in our society. We should all stand with Munroe.”

“I firmly and ‘blackly’ stand with Munroe Bergdorf,” Wanzer said in an interview. “The fact that a brand like L’Oréal and a powerhouse journalist like Piers Morgan have the influence that they have and don’t understand the reality that is white supremacy is both shocking and embarrassing as fuck. L’Oréal is a trusted household beauty name that’s advertising diversity without realizing the responsibility that that entails. Diversity means accepting people’s journeys and stories, be it culture, religion, color or what have you. White people in power not recognizing that they’ve always benefited from white supremacy is the biggest problem in our human fight for equality.”

“Fuck L’Oréal,” Edge said in an interview. “They never made shades for anyone darker than a paper bag anyway. Munroe is a black trans woman who is being crucified by butt-hurt white people, now feebly attempting to nuance ‘reverse racism’... which doesn’t exist. If all white people weren’t racist, she’d still be the spokeswoman for L’Oréal. But this is 2017 where orange is the new American president. I stand with Munroe in her fight against white tears and the patriarchy!”

“It’s important that white people as a society step outside of their own identity to recognize white privilege and how it not only benefits them but harms our brothers and sisters of color,” Lee said an interview. “I stand with Munroe because she represents true diversity with passion and integrity.”