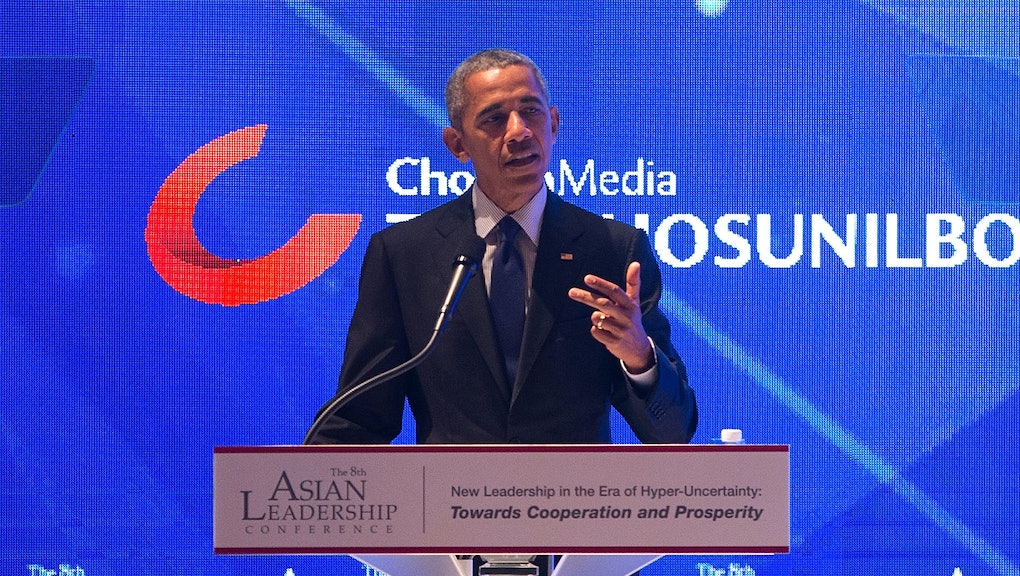 On Tuesday, hours after Attorney General Jeff Sessions announced the end of the Deferred Action for Childhood Arrivals program, former President Barack Obama gave a full-throated denouncement of the decision to repeal one of his signature policies, which allows an estimated 800,000 young undocumented immigrants to live in the United States without the looming threat of immediate deportation.

“[Rescinding DACA] is contrary to our spirit and to common sense,” Obama said in a sprawling Facebook post Tuesday. “... Ultimately, this is about basic decency. This is about whether we are a people who kick hopeful young strivers out of America or whether we treat them the way we’d want our own kids to be treated. It’s about who we are as a people — and who we want to be.”

The former president cited the principle of prosecutorial discretion — the right of officers of the law to decide which cases to pursue — as the legal basis for his administration’s decision to implement DACA.

“We [passed DACA] based on the well-established legal principle of prosecutorial discretion ... because our immigration enforcement agencies have limited resources,” Obama wrote. “Let’s be clear: The action taken today isn’t required legally. It’s a political decision and a moral question.”

Obama’s strongly worded statement comes on the heels of Sessions’ announcement that President Donald Trump would begin winding down DACA with help from the Department of Homeland Security — months after repeatedly assuring its recipients he would treat them “with great heart,” so they “shouldn’t be very worried.”

White House press secretary Sarah Huckabee Sanders pointed to Trump’s decision to gradually phase out the program — as opposed to abruptly ending it — as evidence the president was acting compassionately.

However, a White House official suggested to reporters that once their DACA permits expire, recipients will be at risk of immediate deportation pending a legislative solution from Congress.

Here is the full text of Obama’s statement on the end of DACA:

Immigration can be a controversial topic. We all want safe, secure borders and a dynamic economy, and people of goodwill can have legitimate disagreements about how to fix our immigration system so that everybody plays by the rules.

But that’s not what the action that the White House took today is about. This is about young people who grew up in America — kids who study in our schools, young adults who are starting careers, patriots who pledge allegiance to our flag. These Dreamers are Americans in their hearts, in their minds, in every single way but one: on paper. They were brought to this country by their parents, sometimes even as infants. They may not know a country besides ours. They may not even know a language besides English. They often have no idea they’re undocumented until they apply for a job, or college, or a driver’s license.

Over the years, politicians of both parties have worked together to write legislation that would have told these young people — our young people — that if your parents brought you here as a child, if you’ve been here a certain number of years and if you’re willing to go to college or serve in our military, then you’ll get a chance to stay and earn your citizenship. And for years while I was president, I asked Congress to send me such a bill.

That bill never came. And because it made no sense to expel talented, driven, patriotic young people from the only country they know solely because of the actions of their parents, my administration acted to lift the shadow of deportation from these young people so that they could continue to contribute to our communities and our country. We did so based on the well-established legal principle of prosecutorial discretion, deployed by Democratic and Republican presidents alike, because our immigration enforcement agencies have limited resources, and it makes sense to focus those resources on those who come illegally to this country to do us harm. Deportations of criminals went up. Some 800,000 young people stepped forward, met rigorous requirements and went through background checks. And America grew stronger as a result.

But today, that shadow has been cast over some of our best and brightest young people once again. To target these young people is wrong — because they have done nothing wrong. It is self-defeating — because they want to start new businesses, staff our labs, serve in our military and otherwise contribute to the country we love. And it is cruel. What if our kid’s science teacher or our friendly neighbor turns out to be a Dreamer? Where are we supposed to send her? To a country she doesn’t know or remember, with a language she may not even speak?

Let’s be clear: The action taken today isn’t required legally. It’s a political decision and a moral question. Whatever concerns or complaints Americans may have about immigration in general, we shouldn’t threaten the future of this group of young people who are here through no fault of their own, who pose no threat, who are not taking away anything from the rest of us. They are that pitcher on our kid’s softball team, that first responder who helps out his community after a disaster, that cadet in ROTC who wants nothing more than to wear the uniform of the country that gave him a chance. Kicking them out won’t lower the unemployment rate, or lighten anyone’s taxes, or raise anybody’s wages.

It is precisely because this action is contrary to our spirit and to common sense that business leaders, faith leaders, economists and Americans of all political stripes called on the administration not to do what it did today. And now that the White House has shifted its responsibility for these young people to Congress, it’s up to members of Congress to protect these young people and our future. I’m heartened by those who’ve suggested that they should. And I join my voice with the majority of Americans who hope they step up and do it with a sense of moral urgency that matches the urgency these young people feel.

Ultimately, this is about basic decency. This is about whether we are a people who kick hopeful young strivers out of America or whether we treat them the way we’d want our own kids to be treated. It’s about who we are as a people — and who we want to be.

What makes us American is not a question of what we look like, or where our names come from, or the way we pray. What makes us American is our fidelity to a set of ideals — that all of us are created equal; that all of us deserve the chance to make of our lives what we will; that all of us share an obligation to stand up, speak out and secure our most cherished values for the next generation. That’s how America has traveled this far. That’s how, if we keep at it, we will ultimately reach that more perfect union.