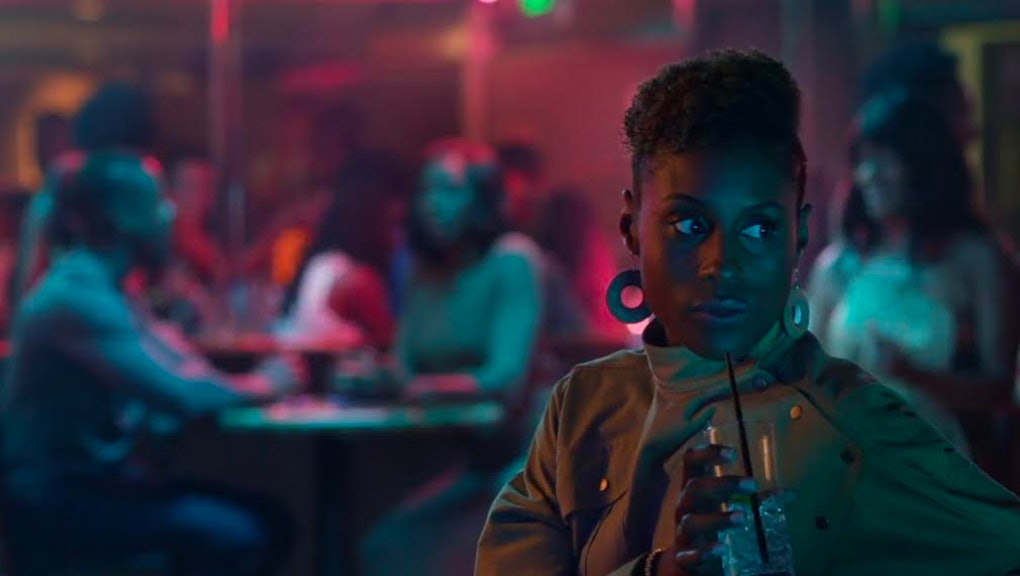 The actors on HBO’s Insecure are hotter than you. They’re hotter than your friends, they’re hotter than me and they’re even hotter than the ex the show won’t let you forget about. Co-created by writer and star Issa Rae (along with Larry Wilmore), the series gives viewers a window into black life as a late 20-/early 30-something in Los Angeles — the hookups and personal hang-ups, the office politics and friendship dynamics. But whether you’re #TeamIssa or #TeamLawrence, you have to admit the people who portray the show’s female and male leads — Rae and actor Jay Ellis — pop on screen, as do everyone else. This isn’t an accident.

Any brown person who’s taken a selfie in the club can tell you cameras aren’t made for us. Yet in Insecure’s club scenes, dark-skinned protagonists like Yvonne Orji’s Molly continue to impress. You can thank Ava Berkofsky, the show’s director of photography, for that. Berkofsky was brought on for the show’s second season (currently airing on HBO) to give the show a more movie-like look, which includes making black faces not only legible, but striking.

“When I was in film school, no one ever talked about lighting nonwhite people,” Berkofsky said in a phone interview with Mic. “There are all these general rules about lighting people of color, like throw green light or amber light at them. It’s weird.” These rules are a start, but they’re far from a complete picture.

“The conventional way of doing things was that if you put the skin tones around 70 IRE, it’s going to look right,” Berkofsky said. IRE, a unit used in the measurement of composite video signals (named for the initials of the Institute of Radio Engineers), ranges from 0 to 100. “If you’ve got black skin, [dialing it] up to 50 or 70 is just going to make the rest of the image look weird.” The resulting image looks very bright, Berkofsky noted, similar to what you’d see in traditional sitcoms like The Fresh Prince of Bel-Air or The Cosby Show.

Lighting people on camera goes back further than old sitcoms, though. The earliest depiction of black faces on film consisted, unfortunately, of white actors in blackface. When actual people of color were seen on screen in black-and-white films, like Dooley Wilson in 1942’s Casablanca and Sidney Poitier in 1963’s Lilies of the Field, they were lit sufficiently but not in any way that could be considered spectacular.

More modern monochrome movies, like Spike Lee’s 1986 film She’s Gotta Have It, showed how black faces could look good even in shades of gray. “The main thing you had to worry about is the reflectivity of African-American skin,” Ernest Dickerson, the film’s cinematographer, said in a phone interview with Mic. “I always made sure that the makeup artists I worked with put a moisturizer on black skin so that we [got] some reflections in there.”

When it comes to calibrating film cameras to properly light a subject, we attribute much of what we know to Kodak’s work with “Shirley cards” from the 1940s through 1990s. Color film was adjusted against the cards, named after model and Kodak employee Shirley Page who appeared on the initial set. As Richard Photo Lab worker Jersson Garcia told NPR in 2014, “If Shirley looked good, everything else was OK. If Shirley didn’t look so hot that day, we had to tweak something — something was wrong.”

Despite their worldwide use, for decades the cards featured only white women. According to Vox, things shifted when companies complained to Kodak that they couldn’t tell different-colored wood products apart. But when did this change happen for brown people as opposed to just brown objects? “I’d say it turned around in 2010,” Berkofsky said. “When the [video camera] Arri Alexa came out, it really changed how people were shooting digital and what kind of results we could get.”

“When I was in film school, no one ever talked about lighting nonwhite people.” — Ava Berkofsky

Berkofsky said the secret to making television resemble film is providing different levels of light to the scene. “[In sitcoms], everything is the same level of brightness. That’s what I’m trying to avoid,” she said. “The trick is keeping [light] off the walls. If you keep it off the walls, you can expose for the faces and it still has a cinematic look.” When working on Insecure, the cinematographer wants every scene to look like a painting.

Berkofsky also said Insecure’s look was influenced by movies like Ava DuVernay’s Academy Award-nominated 2014 feature Selma; in the past, DuVernay has called out shows like Boardwalk Empire for improper lighting when showing both black and white faces on screen.

So how do you make a show look like a piece of art while also doing justice to black faces? The answer is a special whiteboard and a light dab of shiny makeup.

Berkofsky said all of Insecure’s actors take light differently, but rather than putting light directly on them, she uses reflection instead. Similar to Dickerson’s use of moisturizer on the She’s Gotta Have It cast, this adds a bit of shine. “Rather than pound someone’s face with light, [I] have the light reflect off them,” she said. “I always use a white or [canvas-like] muslin, so instead of adding more light, the skin can reflect it.”

Instead of a simple whiteboard, the Insecure crew makes use of whiteboards with little LED lights inside, called S2 LiteMat 4s. In the very first image up top, a 1-foot-by-3-foot LiteMat at low intensity was put near Rae’s face. According to the cinematographer, “it’s reflecting on her skin rather than ‘lighting’ it.”

Berkofsky, in an email to Mic, also discussed the value of a filter called a polarizer: “People use them when shooting glass, or cars, or any surface that intensely reflects light. The filter affects how much reflection a window, or any surface has. The same principal works with skin, and this can be a highly effective way to shape the reflected light on an actors face.”

Berkofsky and her crew combined these lighting tricks with a few new stylistic choices. In her job interview with HBO, she pointed out scenes from the show’s first season, where faces were right next to the edge of the picture but with ample headroom. “I think we can make this into a language that’s cohesive and more cinematic,” she remembered saying in the interview. She also mentioned the surplus of B-roll she and executive producer Melina Matsoukas sought to make Los Angeles feel like its own character: “I always advocate for bigger, wider shots when we’re outside.”

The tech Berkofsky uses for these wide shots and proper lighting is expensive, but she has a tip dark-skinned folks can use to improve their club selfies using just their phones. “Stand close to a soft light source and turn three quarters to the light, so that it’s not filling in everything the same way. Kind of like a Rembrandt painting.” That’ll show your ex once and for all.