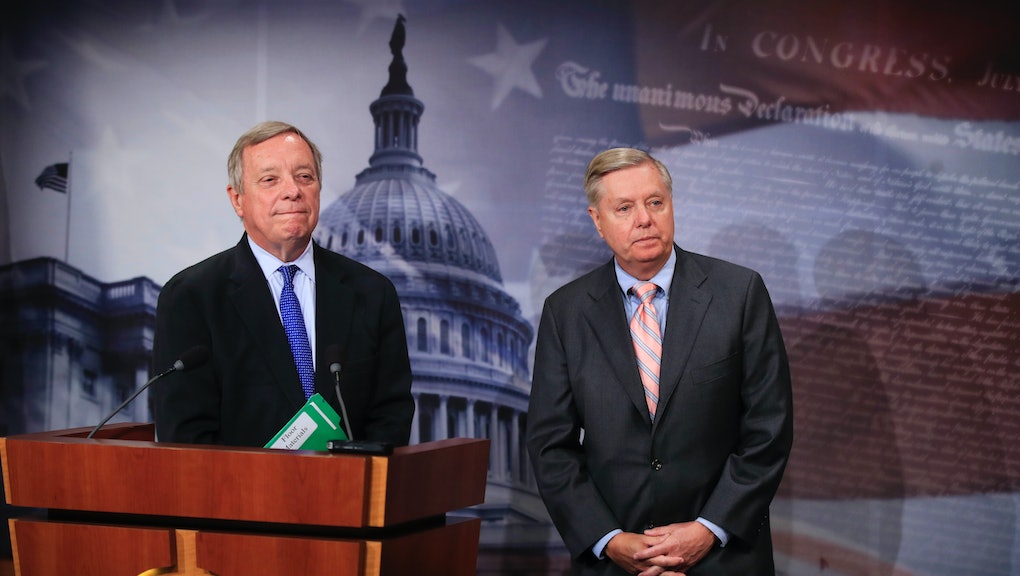 Sens. Dick Durbin (D-Ill.) and Lindsey Graham (R-S.C.) plan to push Congress to pass the DREAM Act in September, they said in a joint press conference Tuesday afternoon, hours after the Trump administration announced it was scrapping the Deferred Action for Childhood Arrivals program that had protected nearly 800,000 undocumented young people from deportation.

The DREAM Act — which would provide a path to citizenship for people who were brought to the United States as children by their undocumented parents — was first proposed in 2001 but has never become law.

But President Donald Trump’s decision to end DACA — which Durbin said put recipients on a “countdown to deportation” — catapulted the DREAM Act to the top of the Congressional to-do list, putting the fates of so-called Dreamers across the country in the uncertain hands of the U.S. House and Senate.

“This is a defining moment,” Graham said. “By the end of September, we need to take care of the Dreamers.”

Durbin has been pressing for the DREAM Act for 16 years, spearheading several unsuccessful attempts to pass the bill, including in 2010 when it was killed by Senate Republicans — Graham among them.

Obama, who supported the DREAM Act, enacted DACA as a “temporary stopgap measure” to protect young undocumented people who were “Americans in their heart, in their minds, in every single way but one: on paper.”

Trump, who campaigned as a hardliner on immigration, had promised during his campaign to “immediately terminate” DACA — which he described as “illegal executive amnesty” — but later said he would do so “with heart.”

“We’re going to work something out that’s going to make people happy and proud,” Trump told Time in December. “They got brought here at a very young age, they’ve worked here, they’ve gone to school here. Some were good students. Some have wonderful jobs. And they’re in never-never land because they don’t know what’s going to happen.”

But Trump has continued to push his immigration agenda, with some DACA recipients — who he said wouldn’t be priorities for deportation — reportedly being caught in the middle.

In July, Durbin and Graham introduced the Dream Act of 2017, apparently in response to concerns that Trump would end DACA.

“Hundreds of thousands of talented young people who have grown up in our country are at risk of deportation to countries they barely remember,” Durbin said in a statement at the time. “I’ll do everything in my power as a United States senator to protect these Dreamers and give them the chance to become American citizens so they can contribute to a brighter future for all Americans.”

Now that the Trump administration has decided to end DACA, it is more pertinent than ever to get the DREAM Act done, Durbin and Graham said Tuesday.

“If there was ever a win-win in modern times, it would be the DREAM Act,” Graham said, urging Trump to lend his support to the bill. “We’re not going to allow these kids to be victim to a broken political process.”