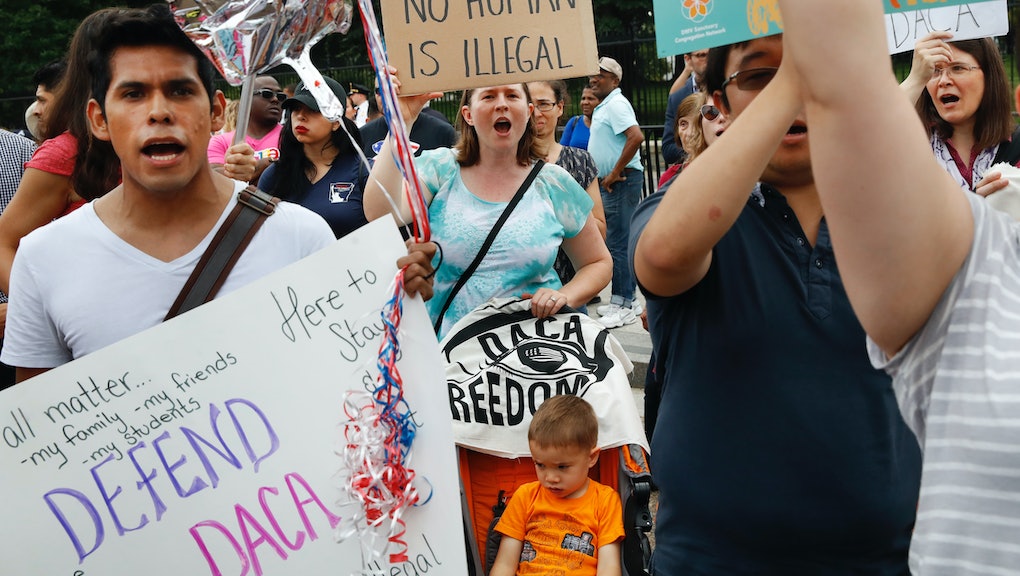 We asked constitutional scholars if DACA is legal. They’re split.

Every day, we bring you a different dispatch on Trump’s America. Today’s focus: Is DACA legal?

Wednesday’s dispatch: Constitutional scholars disagree on whether DACA is legal

On Tuesday, the Trump administration announced Deferred Action for Childhood Arrivals, or DACA, will end in six months unless Congress takes action to preserve the program.

That means close to 800,000 people could lose legal status to live, work and study in the United States by March. They all arrived in the U.S. before they were 16.

When asked by Mic, constitutional law scholars were split on whether DACA is legal — though a large number wrote Trump in August to argue for the program’s constitutionality.

“I am in favor of the DACA policy as a matter of policy, but I do not think [President Barack Obama] had the authority to do it unilaterally,” Michael McConnell, director of the constitutional law center at the Stanford Law School, said in an interview.

McConnell compared Obama’s implementation of the DACA policy to a mayor waiving speeding tickets for individuals.

“If you think about people speeding along the highway, the policeman doesn’t pull them all over,” McConnell said. “He exercises discretion. ... Nothing wrong with that. But if the mayor decided to issue stickers to a certain number of people and exempt them from the speed limit, that would be equivalent to what President Obama did. It gives them a legal right to violate the law.”

“Discretion” refers to the “prosecutorial discretion” the president has to decide what charges to pursue. In DACA’s case, that means deciding against deporting or otherwise punishing someone who came to the U.S. illegally.

“Presidents Ronald Reagan, George H.W. Bush, George W. Bush all have issued prosecutorial discretion programs that have offered temporary reprieves from deportation for hundreds of thousands of immigrants,” Alina Das, co-director of the Immigrant Rights Clinic at the New York University School of Law, said. “Without humanitarian discretion, there is no rule of law.”

Furthermore, Erwin Chemerinsky, dean of the University of California, Berkeley, School of Law, pointed out that “DACA does not change someone’s immigration status.” DACA, he said, is simply a direction from the president to not pursue deportation. “It is not creating a legal right to remain in violation of the law,” he added.

Ilya Shapiro, senior fellow in constitutional studies at the libertarian CATO Institute, disagrees. The president cannot change someone’s immigration status, which Shapiro believes DACA does by granting the right to work and live in the U.S. legally.

“This episode illustrates how President Obama’s penchant for government by executive action leads to continued reversals in his key programs,” Shapiro said. “DACA is the quintessential example of something that’s good policy but bad law.”

Laurence Tribe, a leading constitutional scholar who has been an outspoken Trump critic, said Trump’s disdain for DACA did not square with his travel ban action, a critique echoed by the legal scholars Mic interviewed across the board.

“Trump argues for the religiously discriminatory travel ban by relying on sweeping presidential power to regulate immigration and then turns around and argues that clearly reasonable protection of involuntary child immigrants is beyond the power of the president.”

Today’s question: Whether DACA is legal or not, do you think Congress needs to pass a law to give undocumented immigrants legal status? Please email us at trumpsamerica@mic.com with your thoughts.

The latest DACA fallout: DACA recipients gave the federal government personal information to join the program. Now, the government could use that data to deport them.

Republicans in Congress are calling for a legislative fix to the DACA situation. But a quick refresher on congressional history shows immigration reform is a longshot.

Sens. Dick Durbin (D-Ill.) and Lindsey Graham (R-S.C.) said Tuesday they will revive their push to pass the DREAM Act — a move some say will go nowhere in September. (And, if past is precedent, it will continue to go nowhere.) Top Democrats will announce a push for the legislation on Wednesday morning.

The head of the Hispanic Chamber of Commerce resigned from Trump’s diversity coalition. In justifying DACA’s end, Attorney General Jeff Sessions said it led to a surge of undocumented children at the border. That is wrong. Obama spoke out strongly against ending DACA. And New York’s attorney general is suing the Trump administration.

Meanwhile, universities in key states are pledging support to DACA recipients. And Microsoft is angling to defy the Trump administration’s DACA decision.

A bipartisan group of senators wants to force Trump to sign a resolution condemning violence in Charlottesville, Virginia, and condemning white supremacist groups.

While making one final push on health care before the end of September, Trump will also push lawmakers to combine a vote on relief for Hurricane Harvey with raising the debt ceiling.

Activists rallied in front of the White House and marched to the Trump International Hotel in Washington, D.C., to protest Trump’s decision to end DACA. Tap or click the video below to watch.