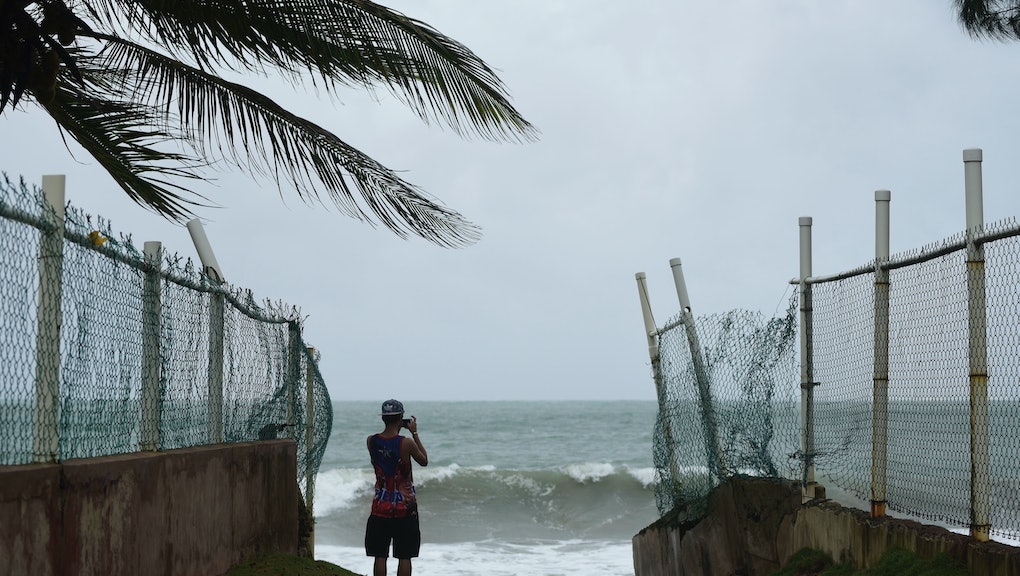 Most Florida Republicans were opposed to funding Sandy relief. What will they do as Irma looms?

In 2013, a vast majority of Florida’s Republican lawmakers voted against appropriating federal funds toward the disaster relief effort for Superstorm Sandy, a destructive hurricane that wreaked havoc on coastal mid-Atlantic states in late 2012. But how will those same members of Congress vote as Hurricane Irma, one of the most powerful Atlantic storms ever, threatens to bring that devastation to their home state?

Though the storm is expected to reach Florida on Sunday, Irma, a Category 5 hurricane which boasts sustained winds of 185 miles per hour, has already plowed through the French Caribbean, ripping the roofs off of homes, destroying local infrastructure and causing widespread power outages. Irma is expected to slam Puerto Rico on Wednesday.

With days before the storm’s anticipated landfall in mainland United States, President Donald Trump declared a state of emergency in Florida, Puerto Rico and the United States Virgin Islands in preparation for Irma’s disastrous impact.

If the damage the storm has already inflicted on the Caribbean islands is any indication of what’s in store for Florida, relief efforts will be necessary to repair the damage Irma is expected to inflict on the Sunshine State. But according to a Bloomberg report, the Federal Emergency Management Agency — the government body chiefly responsible for disaster relief — has spent over $100,000 a minute since Thursday on aid for Hurricane Harvey, which pummeled the Texas Gulf Coast in late August.

At that rate, FEMA’s disaster relief fund — which, according to the report, had just over a billion dollars in it on Tuesday morning — will run out of money by the time Irma hits Florida on Monday. That could pressure Congress to hold a vote to provide more money to the nation’s disaster relief fund before the close of the business week.

If that vote takes place, all eyes will be on the Florida Republican lawmakers still currently in office who voted against the emergency allocation of funds toward Superstorm Sandy relief in 2013: Senator Marco Rubio and Representatives Ted Yoho, Ron DeSantis, Bill Posey, Daniel Webster, Gus Bilirakis, Dennis Ross, Vern Buchanan and Tom Rooney.

If they vote to allocate federal funds toward disaster relief in their own state, they face the same unflattering news cycle endured by Texas lawmakers — with Senator Ted Cruz as the most prominent among them — who urged funding for Harvey relief years after voting against Sandy relief four years ago.

When asked by MSNBC to defend the contradictions in his position, Texas Republican Senator Ted Cruz criticized the “unrelated pork” padded to the Sandy relief bill.

“It became a $50 billion bill that was filled with unrelated pork,” Cruz said. “Two-thirds of that bill had nothing to do with Sandy. And what I said then and still believe now is that it’s not right for politicians to exploit a disaster and people who are hurting to pay for their own political wish list.”

“The congressional members in Texas are hypocrites, and I said back in 2012 they’d be proven to be hypocrites. It was just a matter of time,” Christie told reporters, according to Politico. “We were the disaster that was the longest in waiting in terms of federal aid, and I hope that’s not what happens to the folks in Texas.”

But the New Jersey Governor saved his most vehement invective for Ted Cruz, whom he accused of flat-out lying in his defense of his vote against Sandy funding.

“That is an absolute falsehood,” Christie said on MSNBC, explaining that Cruz only voted against storm relief funds in 2013 to appeal to hardline fiscal conservatives. “What was wrong was for Ted Cruz to exploit the disaster for political gain, and that’s what he was doing.”

But though those Florida Republicans may soon join their Texas brethren in taking a beating in the press and public, their seeming aversion toward allocating federal funds for storm readiness hews to a newer, more extreme version of the fiscal conservative party line under Trump’s unified GOP government.

In Trump’s proposed budget for the next fiscal year, the president slashes funding to the National Oceanic and Atmospheric Administration — the government body that warns the United States of hazardous weather events like hurricanes — by 17%. In August, the House Appropriations Committee sought to cut almost a billion dollars from FEMA, reallocating that money toward Trump’s massively unpopular border wall between the United States and Mexico after promising supporters throughout the campaign that Mexico would pay for the wall’s construction.

Though America’s storm readiness somehow became a partisan quagmire, Irma threatens to devastate Floridians of all political stripes. And with FEMA’s funds quickly running out, it’s up to the Republican-controlled Congress to find a solution as multiple devastating storms start brewing within 30 days of one another.