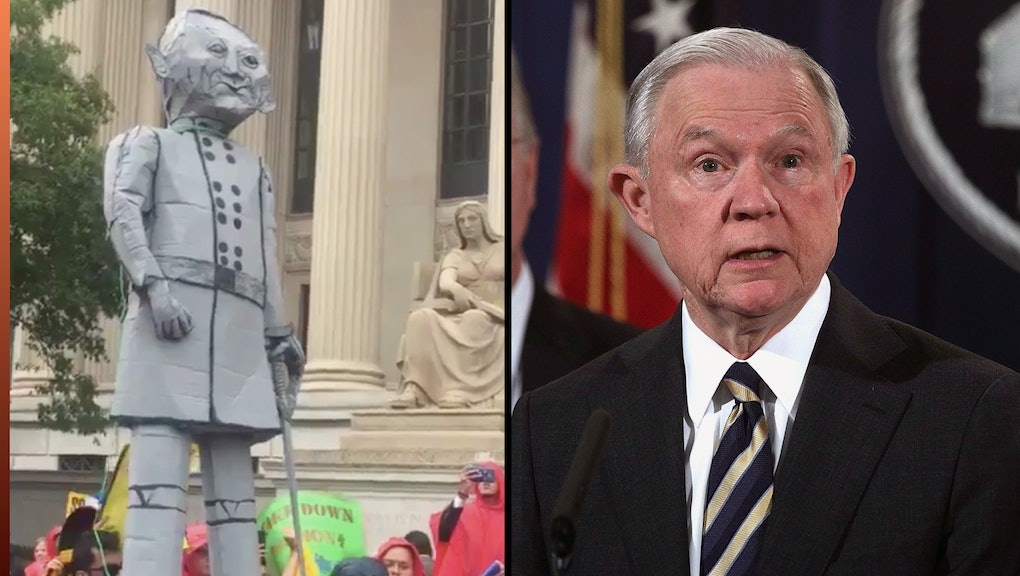 On Wednesday, activists with the Latinx-rights group Mijente marched to the Department of Justice in Washington, D.C., where they first erected, and then tore down a statue of Attorney General Jeff Sessions in confederate garb.

“Jeff Sessions is a living monument to the Confederacy,” Mijente director Marisa Franco said in a statement announcing the action.

The protest took place in response to the administration’s decision to end the Deferred Action for Childhood Arrivals, or DACA, program which protected hundreds of thousands of young undocumented people who arrived in the U.S. as children. The president had Sessions make the official announcement on behalf of the Department of Justice.

“Today we stand together with the 800,000 young people who will lose their status as a result of DACA’s termination as well as the 11 million undocumented immigrants who have watched this president unleash his deportation force upon them with impunity,” Franco said. “We will not accept the criminalization of our community and we will push every person in an office of power to stand against it as well.”

Across the country activists have taken a stand against white supremacy by mobilizing to tear down confederate statues and other homages to confederate icons who fought against the U.S. in the civil war.

Mijentes’ Wednesday protest sought to draw a connection between the president’s DACA decision and the support his administration has received from white supremacists groups across the country.

“No Sessions, No KKK, no racist USA!” protesters chanted as they destroyed the ad hoc statue.