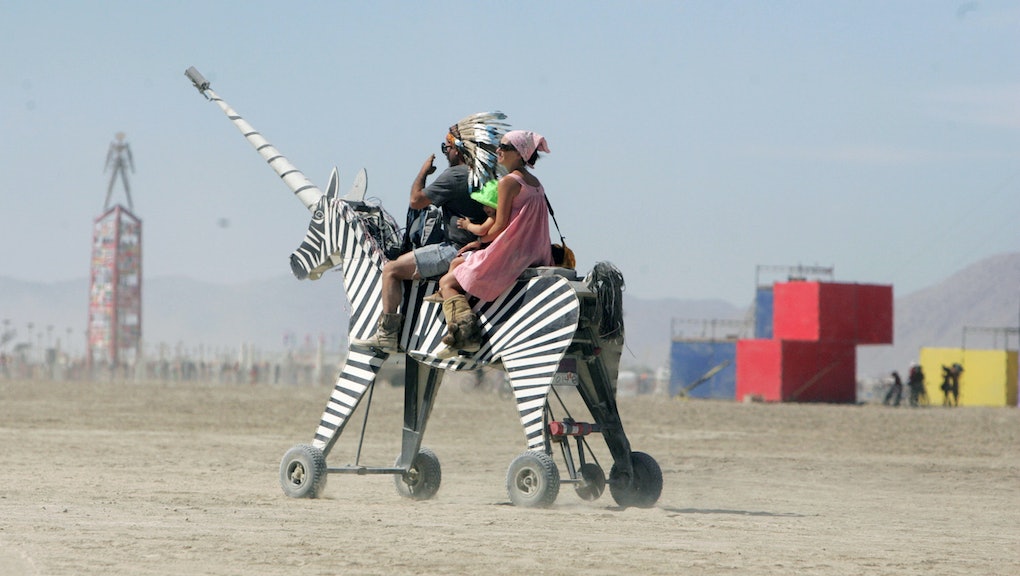 Burning Man promises to disrupt the modern world. And yet the gender dynamics are all too familiar.

There is a series of contradictions to Burning Man that can be difficult to reconcile. One of its foundational tenets is radical inclusion, but it costs a lot of money to get in. It encourages individual self-expression, but if you are not a certain body-type, you feel — and maybe are — practically invisible among the more traditionally beautiful people. Unlike many spaces that embrace a more radical aesthetic, it does not reject late-stage capitalism: some of the most successful tech entrepreneurs in the country have had camps there, including the founders of Uber or Facebook founder Mark Zuckerberg, and charge people hefty sums to camp with them in their top notch accommodations. And it can probably be argued that as a cutting edge cultural phenomenon, it’s reached its peak — after all, this year was Paris Hilton’s second.

The event has changed in the 9 years since I first attended (and first wrote about my frustration of participating in something that I both loved and didn’t feel fully included me), as has the culture around us, and myself. And, getting ready for Burning Man this year, I was both excited at the possibilities of bearing witness to art, music, costumes and endless debauchery and dreading the conditions of the event: 100-degree days and chilly nights, and the difficulty of looking sexy as a big woman on the playa where everyone would most certainly be tiny and naked.

The thing non-Burners may not know is that the playa is teeming with buff men and lithe women, usually wearing a bit of a uniform. For women, it generally involves some type of hot pants or body/bathing suit, ornate headdress, angel wings, feathers, beads, or even face coverings, and leaving their breasts out or covered with just swatches of fabric. It looks awesome, but is not exactly an aesthetic that lends itself to a variety of body types. Men wear tight pants, captain’s hats, tight suits without shirts, all kinds of fur and, no matter how masculine presenting they might be, tutus. (Some wear them so casually that it almost seems like a joke about disrupting masculinity, rather than actually disrupting it.) But regardless of gender identity, what I saw and felt was that standard Playa outfits were mired in, and sometimes even exaggerated, the sexualized objectification of women’s bodies seen in mainstream media, and correspondingly, the reification of a certain type of masculinity.

But in the very early years of Burning Man, disruption of masculinity was a definite part of radical self expression: Men regularly dressed in drag, they wore make-up, dresses, wigs and heels; the infamous Sisters of Perpetual Indulgence even showed up. Women also wore ambitious costumes, but usually in keeping with a more typical expression of gender: feathers on their heads, beaded dresses, homemade, skimpy costumes that looked ready for Carnival. Nudity also became a thing: Men and women were free to express themselves with no clothes at all, if that’s what they wanted — though, of course, female public nudity often has a different resonance both for communities and for women themselves.

As a larger woman at the festival in 2017, though, I felt a disconnect between the theory and my lived experience: sure, I was comfortable experimenting with “fat”shion that I’d be ridiculed for in the real world; but I didn’t fit into an ideal body type for the burn, and I was treated differently because of it. As I walked through camps with my thinner friends, men fawned over them while either ignoring me or eventually coming around to giving me a hug and recognizing that I actually existed.

Burning Man is supposed to be about radical inclusion, but I felt like a teen in high school hoping the hot guys would notice me one day, too.

But it wasn’t just the complex similarities between gender dynamics on the playa and those in the world at large that struck me. At a predominantly white camp, at a predominantly white festival, one with supposedly good intentions about inclusivity, I found myself struck at the potentially off-putting racialized overtones as well.

On one of our first days, my friends and I found ourselves in front of a tent called Joyfully Yours — a clear indication that the experience inside was dedicated to sexuality. I’ve never really connected with the sexual aspects of Burning Man — perhaps because, as a big, brown woman, I felt like they were not for me — but this year I decided to challenge my more judgmental tendencies.

When we went in, there was S&M accoutrements hanging from the walls and, to our right, a roped-off, glassed-in room in which a black woman, fully naked, was being whipped by a tall white man. I blinked twice, to figure out if what I was seeing was what I was seeing. I didn’t want to get too “political” on the playa — it’s an ingrained part of the experience, to be told that we are here to explore and have fun, not be mired by the concerns of the “default world” — and it was clearly a consensual situation. But, seeing a black woman being spanked (consensually) in a glass room, for me, captured what I find to be the most fascinating and difficult to reconcile part about Burning Man: its hope for a world outside of the context and history of race and class, yet inability to circumvent that very same history.

Criticisms of Burning Man are easy and probably somewhat obvious, at this point, and I don’t like writing one because it is rooted in a real artistic and cultural movement that has been at moments empowering, inclusive and defining for my own identity. And it’s gotten better: since my first burn in 2009 there are more and more people of color attending; there are social justice and body positivity camps; there are people trying to directly engage with issues of cultural appropriation.

But it’s hardly enough. Burning Man can be — all at once — incredible, innovative and enriching, and still peddle some of the worst gender, class and race dynamics of the modern world.

Perhaps like many of the events and rituals we engage with in an effort to push our boundaries, bring us pleasure or help us learn more about ourselves, without grappling with very issues that mire us in the real world, we will continue to reproduce them in our imagined ones. After my second (and by all standard measures) extremely successful Burn, I’m still left with the question: Can Burning Man continue to peddle itself as a festival of disruption and innovation if exaggerated versions of the demons that hold us captive in the real world flourish with reckless abandon?