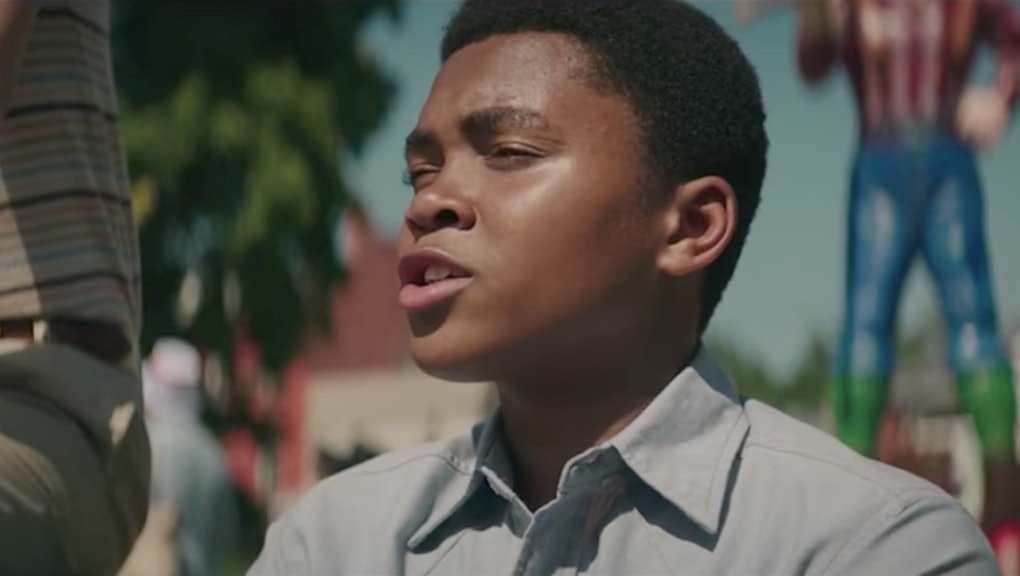 Mike Hanlon, the black kid in Stephen King’s ‘It,’ has a remarkable backstory. The movie erased it.

It’s safe to assume that few moviegoers went to see It this weekend looking for a treatise on race in America.

Most went to be terrified by the demon clown introduced in Stephen King’s 1986 novel, and if the audience response on Friday was any indication, they got what they wanted. But as with most entertainment produced in the United States, race was rarely far from the surface. And for fans of the book, the racial undercurrent that made it such a startling and multidimensional read in the first place has been stripped from Andy Muschietti’s adaptation.

Blackness occupies an unusual space in King’s novel. Of the seven children at the center of It, only one — Michael Hanlon — is African-American. In the book’s parallel storylines, he is arguably the most important character. Twenty-seven years after the children first confront the titular entity, it is Mike, now a librarian in their hometown of Derry, Maine, who summons the gang for a final showdown when they’re adults.

Horror fans are familiar by now with the genre’s tendency to kill off black characters early — an emblem of the subordinate role black people play in most white-centered entertainment. If they’re not sacrificial lambs or obligatory black best friends, they’re magical negroes or mammies: tokens to signal a storyteller’s superficial commitment to racial diversity or stepladders to facilitate a white protagonist’s growth.

Audiences rarely get to see these black characters’ inner lives. They are less human than they are window-dressing, with little to suggest their experience in the story is in any way textured by race. All context — historical or otherwise — that might explain why a black character is alone in this all-white environment, acting like it’s not weird at all, is conspicuously missing from much American entertainment.

It’s absurd, especially considering how few white people have black friends to begin with. This is why Mike Hanlon is so special.

The story of Mike’s family — as King tells it in his novel — is a story of racial violence. The son of a farmer who wound up in Maine when the Army stationed him there as a young man, Mike’s experience in Derry is defined largely by the tragedies his family endured living in the crosshairs of white supremacy.

The Losers’ Club section of the novel is set during the late 1950s, in contrast to Muschietti’s adaptation, which is reset in the Reagan ’80s. Mike and his parents are thus subjected to New England’s brand of Jim Crow terrorism in the book. An early scene that stands out — set years before Mike is born — involves white Derry’s violent response to a speakeasy the elder Hanlon, Will, and his fellow black soldiers set up to pass the time.

The bar — called the Black Spot — becomes wildly popular, replete with live jazz and the sort of racial intermingling that draws the ire of Maine’s Legion of White Decency, a fictional Ku Klux Klan equivalent. The group responds by sneaking outside the establishment one night and setting it on fire while its patrons, black and white, are partying inside.

King spares few details in recounting the horrors of the blaze. At one point, he vividly describes a young white man trying hurriedly to extinguish the flames consuming the back of his girlfriend’s dress, before the room gets too hot and he flees with the stampede of other revelers, leaving the woman behind to burn.

Mike recalls this story as it was told to him by his dying father — a grim totem of the price the Hanlons paid to live in Maine when they did. “I don’t know why it happened here [in Derry],” Will tells Mike. “I can’t explain it; but at the same time, I ain’t surprised by it.”

The racial animus that fueled the speakeasy arson bleeds into Will Hanlon’s early years as a farmer as well. He recalls that so many rocks and empty beer cans were thrown at their home the first year they lived there that he had to replace 20 broken windows.

The family is further terrorized by their racist white neighbor, Butch Bowers, who at one point poisons all of the chickens in the Hanlon family’s coop. Butch’s son, Henry — assuming the intergenerational mantle of his father’s bigotry — becomes Mike’s biggest tormentor as a child, bombarding him with racial slurs and, echoing his dad, eventually killing Mike’s dog.

Mike’s knowledge of his family’s experience with racism ultimately sets him up to become the town’s de facto historian. Unlike his white friends — all of whom flee Derry as soon as they’re of age — Mike stays committed to uncovering the town’s sordid past, setting himself apart as the only character willing to stick behind and reckon with the gang’s collective ghosts.

Even as a child, his historical curiosity makes him invaluable to their battle against It. Mike is the one who discovers that It is an ancient entity who has haunted Derry for centuries. During a carbon monoxide-induced hallucination, Mike and Richie Tozier witness the moment It first landed on Earth from outer space, eons ago.

Perhaps audiences should expect that much of this would be lost in the translation from novel to film — especially when dealing with a book as dense as King’s epic, which crams more backstory and character development into its 1,138 pages than most prestige television shows accommodate in one season, let alone a two-hour movie.

But as my colleague Kristen Yoonsoo Kim pointed out, Muschietti’s adaptation goes a step further than merely cutting corners in the name of economy. The film doesn’t just flatten Mike’s backstory. It reduces him to the kind of token black character that King’s novel was so adept at avoiding.

In the film, Mike barely has any lines. The role of group historian has been taken from him and given to a white character instead. He still gets targeted by Henry Bowers, but gone is the racial subtext that made the experience so entwined with Derry’s history of violence. His blackness seems largely incidental. And as a result, the film never has to address the messy topic of race or how it informs the lone black character’s life.

It would be one thing to gripe about this for failing to stay faithful to the novel — which probably would have been impossible anyway, gargantuan as it is. But by turning Mike into a token instead of a person, the filmmakers did a greater disservice. They robbed audiences of one of the more intriguing black characters in modern horror history.