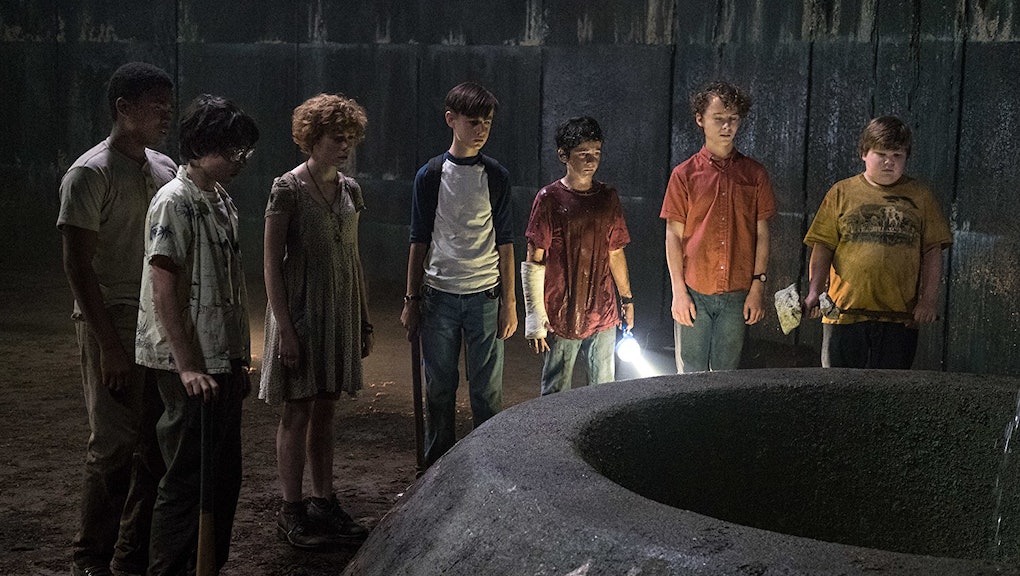 ‘It’ is a story about outsiders, so why does it marginalize its minority characters?

It has become such canonical horror that it’s invaded the collective consciousness. Even if you slept on the three-hour miniseries from 1990, you probably know the general premise of the 1986 Stephen King novel and its ABC adaptation: An evil entity in the form of a killer clown named Pennywise terrorizes a group of kids in the small, fictional town of Derry, Maine. For three decades, this It has been a signifier of a certain American nightmare — not just our culture’s distrust of clowns, but also the idea that there’s horror lurking behind the seemingly ordinary.

This Friday, It is being resurrected, with a reboot from director Andy Muschietti. Muschetti’s Pennywise is something far more sinister than the version played by Tim Curry 27 years ago — its fangs are larger and sharper, its ruses trickier and its trail bloodier. Despite the updates, the villain (portrayed with manic glee by Bill Skarsgård) is still eventually defeated by our unlikely heroes: a band of seven preteens who call themselves the Losers Club. If you couldn’t tell from their handle, they’re bullied and misunderstood, the kids who deal with evils both human and supernatural. But even within this group of outsiders, some members are neglected by the film.

Bill (Jaeden Lieberher), the stuttering leader of the Losers, is haunted by the death of his younger brother Georgie (Jackson Robert Scott) — the victim of the story’s famous opening sewer scene — so he rounds up a gang to fight the monster. We’re introduced to the kids via their individual fears and hang-ups, like hypochondriac Eddie (Jack Dylan Grazer), whose mother most likely suffers from Munchausen syndrome by proxy and keeps her son medicated and paranoid. Ben (Jeremy Ray Taylor), the fat new kid, is relentlessly picked on by the school bully Henry (Nicholas Hamilton) and his minions, and in one queasy scene, gets the letter “H” carved into his stomach with a knife. Perhaps the most excruciating to witness is the home life of Beverly (Sophia Lillis), who clearly is a victim of sexual abuse at the hands of her father.

Oddly, Muschietti chose the scene of Stanley’s introduction to feature in the New York Times’ “Anatomy of a Scene” series, but beyond the smart framing choices that show the boy feeling trapped by the rigidity of familial traditions, the director doesn’t really delve into that theme. Not much more materializes from his fears, aside from a horrible Modigliani rip-off painting that begins to terrorize him. In fact, it’s impossible to recall a single memorable thing he does or says in the film; throughout the entire 135-minute runtime, he remains passive and scared. (Admittedly, Stan isn’t all that developed in King’s novel, either; but it still feels like a missed opportunity to flesh him out.)

An even more frustrating case of erasure is that of Mike (Chosen Jacobs), the only black kid in the main group. He’s almost just as devoid of personality as Stan. He’s originally supposed to be the historian of the gang, but that duty’s transferred to Ben’s character, so Mike sort of just exists as the black kid. His disturbance is the memory of the fire that killed his parents, but the movie brushes over this, and doesn’t give him much to do. Mike faces racism, but it doesn’t cast as heavy a shadow as you’d expect for the lone black boy in a small town in Maine in the ’80s.

Movie Pilot recently noted that the book — which takes place in the more explicitly racist ’50s — makes use of the word “n*gger” 102 times. Now, the new film doesn’t have to rely on that hateful slur to communicate bigotry, but the racism that Mike faces is so watered down that he loses some of the individual purpose in the kids’ fight against evil. Mike’s given one moment of mild heroism when he triumphs over the bully Henry once and for all, but there’s no cathartic release. We’re watching Mike overthrow the film’s biggest bigot, but this victory feels more like the result of circumstance and less of a character-driven choice; Mike just happens to be alone when Henry confronts him near the movie’s end.

Part of what makes It so enduring is that there’s an undeniable thrill in watching the Davids beat the Goliaths. And there are a lot of stones that get thrown — both in a literal rock-throwing fight with the school’s bullies, and also when the Losers are fending off different ghoulish versions of the shape-shifting Pennywise. But it’s disappointing to see certain characters marginalized, especially since these kids are already sidelined at school.

In the book and the original miniseries, we get to see the Losers all grown-up, as they reunite 27 years later to battle Pennywise once again; in the new film, Muschietti only focuses on their childhood, saving the adult stuff for a part two, which was just greenlit by New Line Cinema. If the time jump covers the same number of years, then it’ll be 2016 in the sequel; and if that’s the case, then hopefully the treatment of Stanley and Mike will feel more, well, modern.