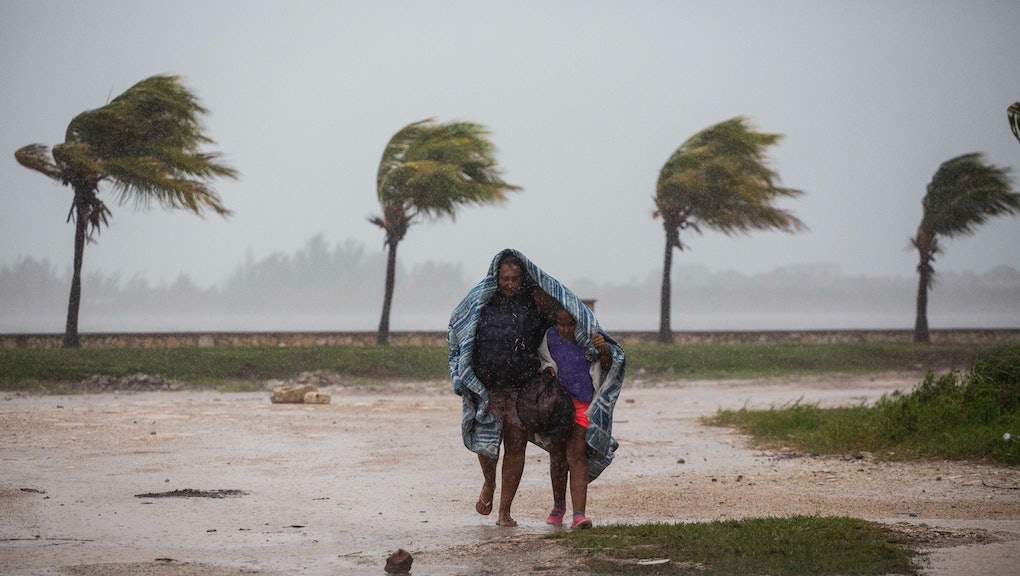 With another historically large hurricane heading directly toward the United States, there are a few things you should know about the government program that insures Americans against flood damage.

It’s in debt to U.S. taxpayers to the tune of $24.6 billion. (That was driven by payouts from Hurricanes Katrina and Sandy. It does not account for damage by Harvey and Irma.) Five million Americans currently have flood insurance, but fewer people are paying into the program — either because they don’t have to or don’t think they need to. The program is supposed to sustain itself with insurance premium payments, but taxpayers have subsidized the fund ever since Hurricane Katrina.

Perhaps the most important point: If you weren’t paying into the National Flood Insurance Program before a flood, you’ll receive far less government help when there is one.

The fundamental problem, experts say, is that people want to live near the water but don’t want to pay for the risk that brings. And private insurers don’t want to cover that risk at the rates people are willing to pay. So for years, the federal government has not made Americans shoulder the true cost of flood insurance.

“If the price you have to pay gives you some sense of what the risk is associated with the activity, then by subsidizing that, you’re giving [people] the wrong idea of what the risk actually is,” said Chad McGuire, a professor at University of Massachusetts Dartmouth.

“[People are] going to behave accordingly.”

The NFIP was created in 1968 after private insurers decided they could not make money insuring homes that could flood.

But the program’s individual premiums are rarely anywhere near what their flood insurance should actually cost. That’s because of billions of dollars in federal subsidy. And there’s little that forces people to pay their flood insurance; If you pay for the first year of insurance, you may get away with never paying it again.

“It’s like having health insurance for just very sick, older people,” McGuire said. Those problems are catching up with the program.

Over the past five years, the Associated Press found most counties in Florida have fewer people paying their flood insurance. The same was true in Texas counties affected by Hurricane Harvey.

That drop in coverage was partly attributed to a change Congress made after Hurricane Sandy in 2012. The government realized thousands of homes affected by that storm and covered by the NFIP were paying nowhere near what their insurance should actually cost.

A 2012 reform to the NFIP drove up premiums for people in flood zones. Those increases were rolled back in 2014, but some people had already dropped off the program.

“The price needs to reflect the risk,” said Don Griffin, a vice president at the Property Casualty Insurers Association of America. “People need to know what kind of risk they have.”

Despite their 2014 rollback of flood premium hikes, lawmakers agree with that private sector sentiment. “With pricing discounts that do not reflect the reality of risk, the program creates perverse incentives to build and re-build homes and businesses in flood-prone areas,” Rep. Jeb Hensarling (R-Texas) wrote in U.S. News and World Report.

Republicans and Democrats in the House voted last year to let people in flood zones buy private flood insurance, at rates that would be higher than the government insurance program has offered them in the past. Some studies have shown private insurance, in competition with the NFIP, could drive flood coverage prices lower — but that has yet to be tested on a large scale.

The House-passed legislation was never considered in the Senate.

And there’s another problem that’s growing with the higher likelihood of stronger storms and fewer people buying flood insurance: helping those with flooded homes who were not in the flood program.

The Federal Emergency Management Agency, FEMA, offers grants and low-interest loans to people whose lives are destroyed by storms. But the agency is clear that its assistance, including loans that must be paid back, may not be enough to pay for the losses incurred by flooding.

“FEMA does not pay to return your home to its pre-disaster condition,” the agency writes on the FAQ page on its website. “FEMA provides grants to qualified homeowners to repair damage not covered by insurance, but these grants may not pay for all the damage.”

That means if you weren’t paying into the NFIP and your home floods, the government may only cover a fraction of the damage.

“[People think] you don’t have to pay for any potential insurance ... because Uncle Sam is going to come in and bail you out,” McGuire said. Stories from Katrina, Sandy and other hurricanes show that is not true.

For example, FEMA granted $5.8 billion to 916,000 families and individuals impacted by Katrina. That’s an average of only $6,300 per family. For Sandy, it was higher at nearly $12,200 paid out per claim. Neither figure is likely to pay for recovery of a flooded home.

Experts agree this problem will be a hard one to solve. If private insurers fear major losses, they may not enter the flood coverage market. Without being forced to, people may not pay higher, less-subsidized premiums for their flood insurance.

About 40% of Americans live in coastal counties, a population that is expected to grow 8% by 2020 as climate change increases the chances of storms that bring more rain.

Last week, Congress approved $15 billion in disaster relief for victims of Harvey — a fraction of what will ultimately be required. Katrina ultimately cost taxpayers a total of $110 billion; Harvey could cost the government up to $180 billion. Not all of that will come out of the NFIP, but losses there will be heavy.

“If there weren’t anymore [hurricanes], it would take 25-30 years to pay back the debt they already have to U.S. taxpayers. That’s before Irma and Harvey,” Griffin said. “I don’t think they have a clear picture of what their flood risk really is. [Because] where it rains, it can flood.”