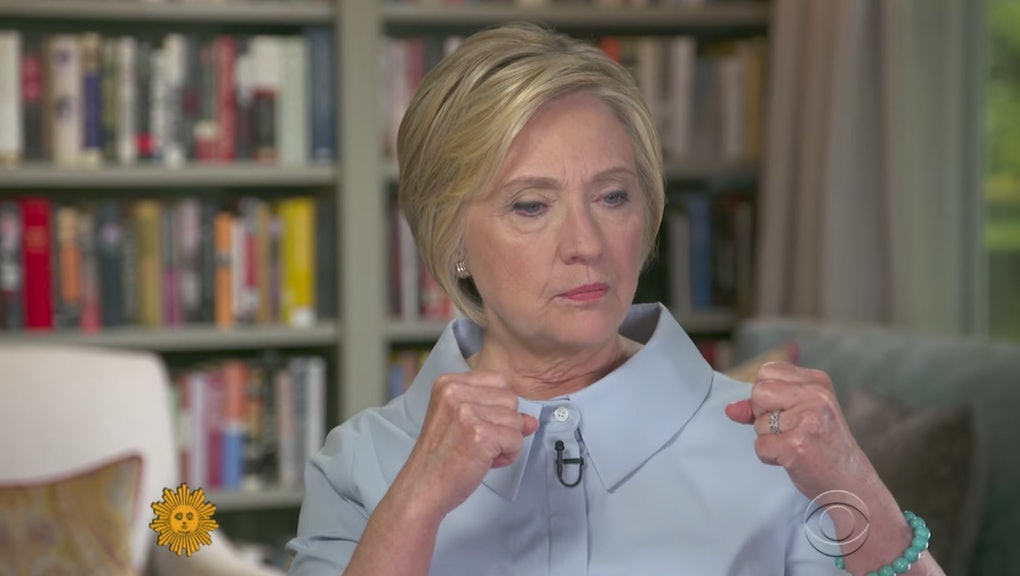 In first television interview since her defeat, Hillary Clinton opens up on what went wrong in 2016

In her first television interview since her stunning defeat on Election Day, former presidential candidate Hillary Clinton shared her perspective on what went wrong with her 2016 campaign — and the biggest mistakes she made that led to President Donald Trump’s upset victory.

“The forces that were at work in 2016 were unlike anything that I’ve ever seen or heard about,” Clinton told CBS’ Jane Pauley on Sunday Morning. “It really was a perfect storm.”

The erstwhile presidential hopeful opened up about what she thinks was the biggest of her mistakes: using a personal email server during her tenure as secretary of state.

“Most important of the mistakes I made was using personal email,” Clinton said. “I said it before, I’ll say it again: That was my responsibility. It was presented in such a negative way and I never could get out from under it and it never stopped.”

According to Clinton, another key failing of her campaign was her seeming lack of empathy towards the lingering resentment in the wake of the financial crisis of 2007 and 2008.

“I understood that there were many Americans who, because of the financial crash, there was hate and there was resentment — but I believed it was my responsibility to offer answers to it,” Clinton said. “I believe [only offering answers] was a mistake because a lot of people didn’t want to hear my plans — they wanted me to share their anger. And I should’ve done a better job of saying, ‘I get it.’”

Choking back tears, Clinton described the pain of attending Trump’s inauguration — and listening to her victorious opponent’s speech, which she called a “cry from the white nationalist gut.”

But though the pain of the Election Day loss still stings her months later, Clinton told Pauley that long walks in the woods, a “frenzy of closet cleaning” and her favorite white wine all helped her with the pain of defeat.

“My political career as an active politician is over,” Clinton said. “I am done with being a candidate, but I am not done with politics because I believe our nation’s future is at stake.”

Clinton’s Sunday appearance comes just days before her upcoming book, What Happened, becomes available for purchase. But though it hasn’t hit bookshelves yet, What Happened has already stirred controversy on the left, drawing criticism for appearing to rub salt in the wounds of a party trying to move past its crippling 2016 defeat and plan for the future.

Perhaps unsurprisingly, Clinton saved her most vehement invective for opponent Bernie Sanders, an Independent Senator from Vermont, whom she defeated in the 2016 Democratic Primary. According to Clinton, Sanders did “lasting damage” to her general election campaign, “paving the way” for some of Trump’s most successful attacks against her in the general.

“[Former President Barack Obama] urged me to grit my teeth and lay off Bernie as much as I could,” Clinton wrote of the Independent senator from Vermont. “I felt like I was in a straitjacket. Nonetheless, his attacks caused lasting damage, making it harder to unify progressives in the general election and paving the way for Trump’s ‘Crooked Hillary’ campaign.”

“Joe Biden said the Democratic Party in 2016 ‘did not talk about what it always stood for — and that was how to maintain a burgeoning middle class,’” Clinton wrote. “I find this fairly remarkable, considering that Joe himself campaigned for me all over the Midwest and talked plenty about the middle class.”

The book’s focus on Democrats’ 2016 defeat led one of Clinton’s former surrogates to tell her to “shut the fuck up and go away.”

“The best thing she could do is disappear,” the former surrogate told the Hill. “She’s doing harm to all of us because of her own selfishness. Honestly, I wish she’d just shut the fuck up and go away.”

For his part, Sanders dismissed Clinton’s claims that his primary campaign hampered her shot at the presidency.

“Look, Secretary Clinton ran against the most unpopular candidate in the history of this country and she lost and she was upset about it and I understand that,” Sanders said on The Late Show with Stephen Colbert. “But our job is really not to go backwards. It is to go forwards.”

“I think it’s a little bit silly to keep talking about 2016,” the senator added.

What Happened, Clinton’s new book on the 2016 election, will be available for purchase on Tuesday.