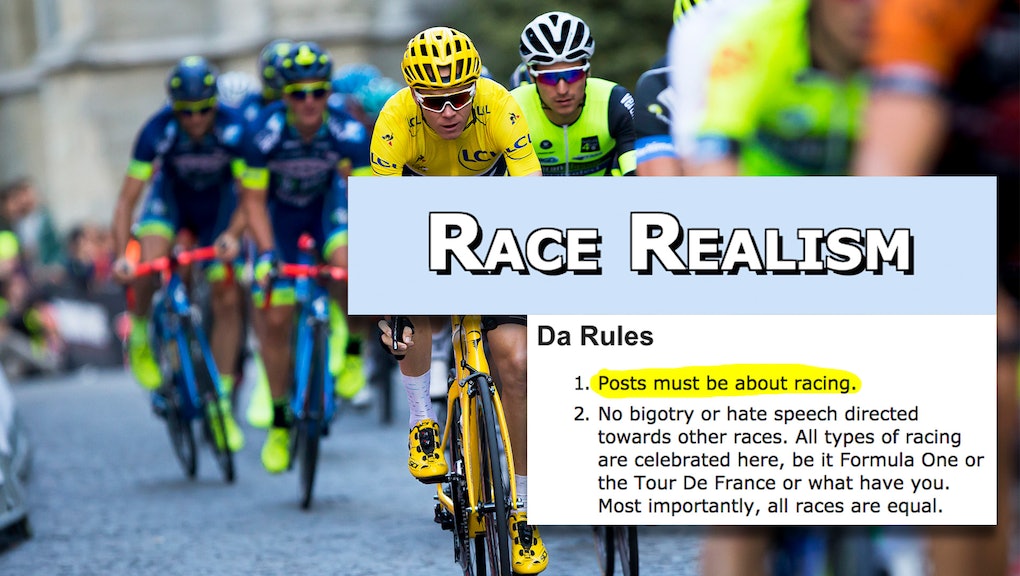 Until recently, Reddit users who wanted to air their white supremacist views might’ve gone to the subreddit /r/Race_Realism. If they go to that page now, they’ll simply see posts about actual races — you know, the kind with fast cars that go vroom.

This sudden, hilarious pivot is actually just one example of something much larger happening across Reddit as a whole: In an effort to squash out racist subcommunities, a group of Reddit vigilantes are going right to the source and reclaiming pages one by one.

One of the first big examples of this new, decidedly wholesome form of internet trolling occurred on /r/Stormfront, a subreddit originally named after the infamous neo-Nazi website and internet forum. Thanks to some cheeky Reddit users who took the subreddit over, /r/Stormfront is now dedicated to discussing the weather. Any kind of “disrespectful, hateful or discriminatory comments on race, religion, ideology, ethnicity, gender, political affiliation and sexual orientation are not allowed,” according to the page’s new set of guidelines.

“I love that people coming to Reddit to read about racism instead find themselves exposed to trends in severe weather,” Reddit user awkwardtheturtle, who has reclaimed a number of these racist subreddits, told Mic via Reddit private message. “It’s just such a funny twist.”

Here’s how they do it: Once someone like awkwardtheturtle has identified a subreddit with objectionable, racist content, they check to see whether its moderators are active, or whether the page is simply festering like an open, untreated wound. If the page’s current moderators have been inactive for long enough, anyone can request moderation power by submitting a post on /r/RedditRequest. So, they simply bide their time and strike when they see an opportunity to do some good. Then, they share their victories in places like /r/AgainstHateSubreddits and wait for a chance to do it all over again.

“The first one I got was /r/WhitePolitics,” awkwardtheturtle said. “The subreddit was really vile and my first action as new top mod was wiping out all of the old racist posts. Then we celebrated by posting to /r/AgainstHateSubreddits and flooding the community with posts about the color white.”

After that initial success, awkwardtheturtle decided to keep the momentum going, turning his attention to /r/Race_Realism after another person in his Reddit circles had claimed /r/RaceRealism, a similar page with a slightly differently formatted name.

“The thing is, the sub with the underscore was much bigger — it had 10 times the subscribers — so I was worried about community backlash,” awkwardtheturtle said. “However, again, /r/AgainstHateSubreddits loved to hear about it, and our announcement was highly upvoted. The community celebrated.”

Unsurprisingly, awkwardtheturtle said swiping the rug right out from under these toxic online communities has earned him a few enemies.

“Some of them are very persistent and will make multiple accounts to evade their ban, threaten us in modmail, spam our modmail, etc. The admins are good about banning these accounts, but it’s easy to create new accounts, not much you can do about that. Some people are just really persistent. Hatred is a powerful motivator.”

Luckily, that’s not slowing down awkwardtheturtle and allies. For example, on /r/Faggots, now you’ll just see posts on the latest techniques in stick bundling. On /r/JewWatch, you can look at pictures of Judaism-themed timepieces. /r/Whites is simply about things related to the color white. The list goes on.

“We have more subs we are watching,” awkwardtheturtle said. “There are plenty on Reddit, and every one taken out of the hands of racists is a victory. Our next plan is to get some fancy racing decals and decoration added to /r/Race_Realism, then who knows. The sky is the limit.”