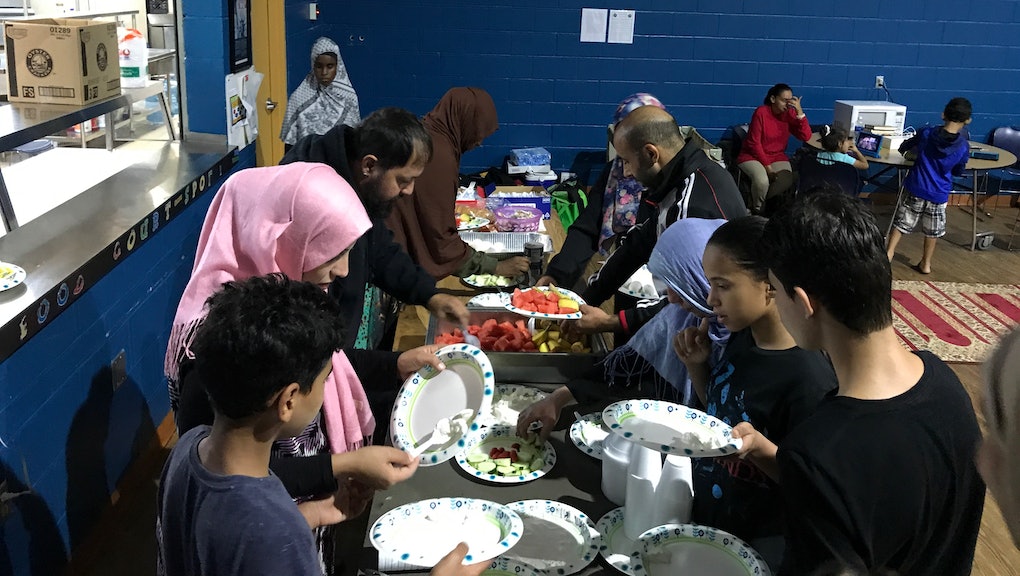 At a small Muslim school, Floridians take shelter, share meals and prepare to ride out the storm

As Hurricane Irma bore down on southern Florida on Sunday, residents of the state, many under evacuation orders, sought shelter in schools, churches, synagogues and hockey rinks. In Goldenrod, Florida, on Sunday just outside of Orlando, a small Muslim school turned into a shelter for anyone, Muslim or not, who needed respite from the storm.

By Sunday afternoon, some 15 to 20 families were sheltered at the Leaders Preparatory School, a private Muslim school that had become one of three area shelters operated by the Islamic Society of Central Florida, Bassem Chaaban, director of outreach for the ISCF, said in a phone interview on Sunday.

Gathering together in a room usually used as the school gym, the families who had taken shelter there shared meals, played games and set up their bedding on prayer rugs.

Dinner on Saturday night was “just basic rice and chicken,” Chaaban said — but there was plenty to go around, and the ISCF is prepared to take in more people who need a place to wait out Irma.

“We can fit about 200 people,” Chaaban said, adding that he was expecting more to show up as Sunday went on, “based on the looks of how this hurricane is going.”

Some 10 volunteers were working at the makeshift shelter, and it was fully stocked with board games, video games and movies. “We have two generators if the electricity goes out,” Chaaban said.

Chaaban said he wasn’t sure how long the school would need to remain open as a shelter — it’s one of at least fifteen shelters open in the county — but he said they’re prepared to remain open through Tuesday if needed.

“We’re tracking the storm just like everybody else,” Chaaban said. “Anybody who’s seeking shelter, coming from Tampa, south Florida ... we have plenty of room. We stand united with everybody in central Florida.”