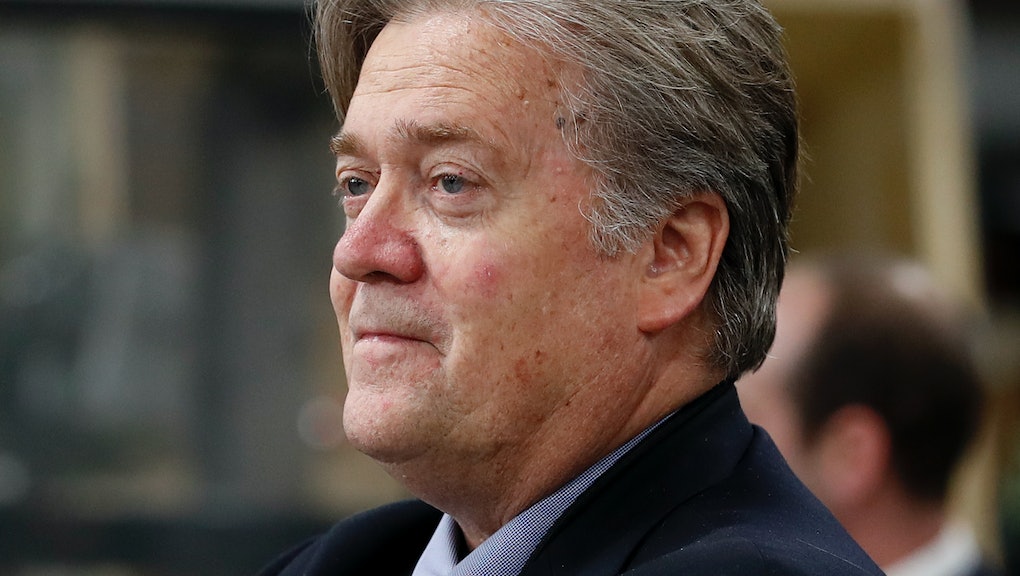 Former White House chief strategist and alt-right media mogul Steve Bannon gave his first ever TV interview to CBS’s 60 Minutes on Sunday. In a heated back and forth with CBS’s Charlie Rose, Bannon sounded off on everything from immigration, to the Russia investigation, to the tension between President Donald Trump and establishment Republicans.

Here are the three most important takeaways from the interview.

Bannon is launching an assault on mainstream Republicans from outside the White House.

Bannon made it clear from the outset of his TV appearance that he was prepared to launch direct attacks against members of his own party who he believed were standing in Trump’s way.

“The Republican establishment is trying to nullify the 2016 election,” Bannon told Rose in an early portion of the interview. When pressed on whom he was referring to, Bannon was quick to name names.

“I think Mitch McConnell, and, to a degree, Paul Ryan,” Bannon said. “They do not want Donald Trump’s populist, economic nationalist agenda to be implemented. It’s very obvious.”

The assault on establishment Republicans appears to have been timed with the rollout of a broader electoral strategy targeted at the GOP establishment.

Trump’s leaked sexual assault tape was a “litmus test” of support for members of his team.

In the interview, Bannon also expounded in great detail on the Trump campaign’s initial reaction to the now-infamous Access Hollywood tape.

According to Bannon, after the tape of Trump bragging about sexually assaulting women was released, Bannon began actively assessing the loyalties of several top Republicans and collecting names for what he called his “black book.”

“Christie, because of Billy Bush weekend ... was not looked at for a Cabinet position,” Bannon said of New Jersey Gov. Chris Christie, who was famously exiled from Trump’s inner circle.

“I told him, ‘The plane leaves at 11 o’clock in the morning. If you’re on the plane, you’re on the team,’” Bannon recalled. “[Christie] didn’t make the plane.”

Bannon also said that former chief of staff Reince Priebus told the president in that moment that he had two choices: “Drop out right now, or you lose by the biggest landslide in American political history.”

Bannon claimed that when he was asked by Trump in that moment what his chances of winning were, he told the then-candidate, “It’s 100%. You have 100% probability of winning.”

Despite his ouster from the administration, Bannon still believes in loyalty to Trump as a paramount value.

“When you side with a man, you side with him,” Bannon told Rose when asked about the loyalties of some of Trump’s staff. “If you find it unacceptable, you should resign.”

In a portion of the interview released on Thursday, Bannon said that he believes Trump’s economic adviser Gary Cohn should resign because of his reservations about Trump’s response to the white supremacist rally in Charlottesville, Virginia.

Bannon did muster the courage to criticize Trump’s decision to continue the Deferred Action for Childhood Arrivals program for six months, arguing that the program should be abolished immediately and the young, undocumented people it protects should “self-deport.”

But even on this issue Bannon refused to give a direct answer when asked if he believes Trump made the wrong decision, instead turning the conversation away from the president himself.