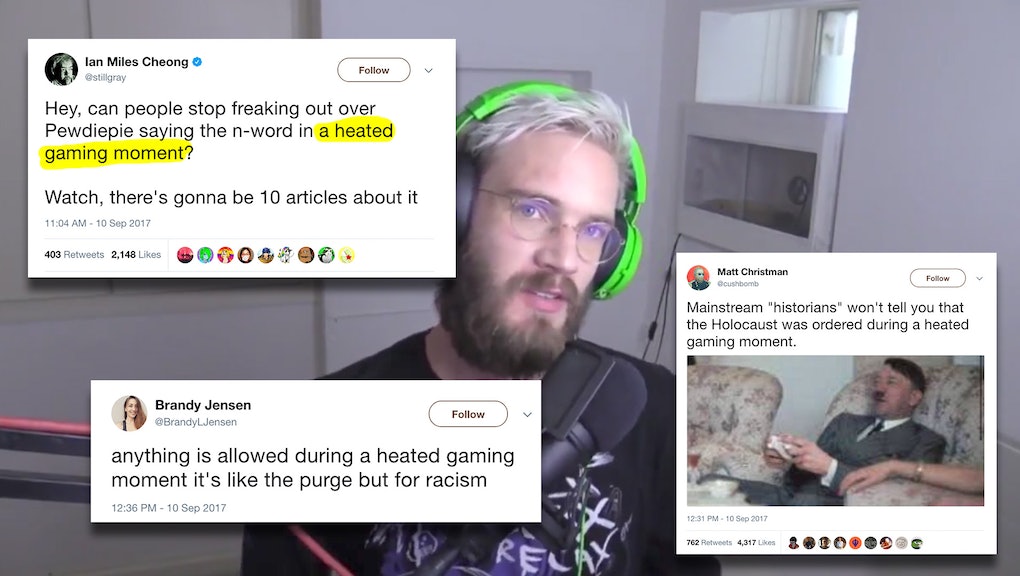 On Sunday, YouTube’s biggest star, Felix “PewDiePie” Kjellberg, used a racial slur in the middle of a YouTube livestream. It wasn’t the first time Kjellberg, who has 57 million subscribers, used n*gger (or a variation of it) in a YouTube video, and it came just weeks after the controversial star promised to stop making Nazi jokes in his videos.

Kjellberg appears to have deleted the original video from his YouTube channel, but the damage was done: Several viewers managed to capture the moment themselves, and the clips have been spreading around social media like an angry wildfire, many with the hashtag #PewDiePieIsOverParty.

But not everybody has been so hasty to condemn Kjellberg’s word choice. Take, for example, Ian Miles Cheong, a writer for the right-leaning Daily Caller, who characterized Kjellberg’s outburst as an honest whoopsie — that Kjellberg temporarily lost control of his emotions, causing him to say a bad word he wouldn’t under normal circumstances.

“Hey, can people stop freaking out over PewDiePie saying the N-word in a heated gaming moment?” Cheong tweeted. “Watch, there’s gonna be 10 articles about it.”

The phrase immediately took on a life of its own. As some people pointed out on Twitter, plenty of folks manage to get through “heated” moments, gaming-adjacent or otherwise, without invoking racist epithets.

Rather than actually engage with Cheong’s apparent defense of Kjellberg, most people took a decidedly darker, more macabre twist on the phrase “heated gaming moment” — and it’s become a full-blown meme.

If Kjellberg’s use of racist language can be waved off as nothing, then, hoo boy, what other terrible moments throughout history can we retcon in the same way?

What other terrible moments throughout history can we retcon in the same way?

Have you done something you regret? Started a war? Murdered someone in cold blood? Don’t worry. It was probably just because you were in a heated gaming moment.

So, how is Kjellberg himself responding to the drama? Well, he isn’t. Not directly, anyway. His latest video, published Monday, is titled “STREAM FAILS,” and it’s entirely focused on other YouTubers’ mistakes during livestreams.

“I’m bound to end up on this list at some point, you know I’m gonna slip up,” Kjellberg says in the video’s intro. “It’s bound to happen. In the meanwhile, we’re going to laugh at other people.”