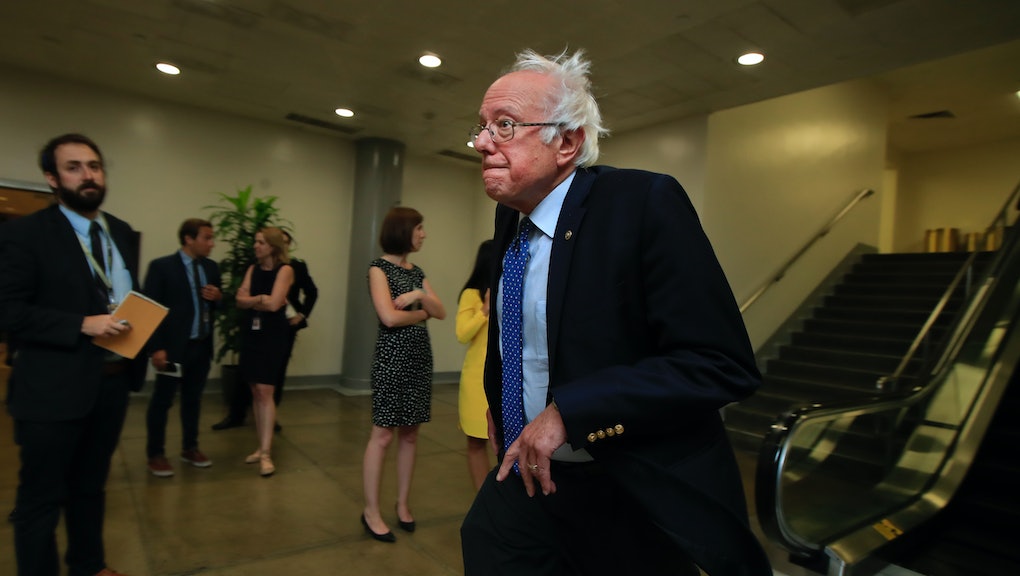 As single-payer fever spreads, here’s a history of the big promises made by past minority parties

Every day, we bring you a different dispatch on Trump’s America. Today’s focus: Single payer.

Wednesday’s dispatch: As single-payer fever spreads, here’s a brief history of the big promises made by the minority party in the past.

On Wednesday afternoon, Sen. Bernie Sanders (I-Vt.) will have a moment he was likely not expecting to have a year ago.

The progressive insurgent, whose 2016 presidential campaign started a movement, will stand alongside a stable of Democrats who support his “Medicare-for-all” health care plan.

The single-payer proposal, which would push the government to collect higher taxes to provide health insurance for all Americans, has long been a dream of Sanders and progressives. But only in the last few months has the idea caught fire among establishment Democrats.

Wednesday’s announcement marks a major shift for Democrats. Rising stars in the party have endorsed a plan that Clinton dismissed last year. A cornerstone of Sanders’ presidential run registers high levels of support among Democrats, and a third of all Americans now support single payer.

These Democrats would be far from the first group of politicians to make a pie-in-the-sky promise in a bid to convince voters. But when it comes to successful implementation of such a promise, history is not on their side.

In 1994, Republicans seized control of the House for the first time in 40 years by offering a “Contract with America.” Key promises included demanding a federal budget that was balanced, term-limiting members of Congress and the elimination of dozens of federal programs.

Laws requiring a balanced federal budget or term limits never passed. In 2000, the libertarian Cato Institute determined that “the combined budgets of the 95 major programs that the Contract with America promised to eliminate have increased by 13%.”

In 2006, Democrats running to wrest control of Congress from the GOP promised to end oil and gas subsidies while forcing drug companies to negotiate their prices. They won the House and the Senate, but 11 years later Medicare still does not negotiate to set prescription drug prices. Oil and gas companies received billions of dollars in subsidies in 2016.

And of course, the most recent example of an unfulfilled legislative promise is the Republican commitment to “repeal and replace” the Affordable Care Act. The GOP controls every inch of government — and we’re still waiting.

So why is single payer such a long shot?

A narrow majority of Americans support “Medicare-for-all.” But their support plummets when told the program could raise taxes or change health care coverage.

In 2009, Democrats had 60 votes in the Senate and still could not pass single payer. They would have to net 12 Senate seats and win the White House by 2020 to advance this plan.

And while Sanders will enjoy broad public support from his colleagues on Wednesday, it’s too soon to know how deep their commitment to single payer runs. Democrats hold no sway in Congress; they can propose anything and not worry about having to take a tough vote.

Today’s question: Do you think single payer can pass? Or is it a political ploy? Email us your thoughts at trumpsamerica@mic.com.

House Speaker Paul Ryan (R-Wis.), Minority Leader Nancy Pelosi (D-Calif.) and other top House members will meet on Wednesday to discuss the future of “Dreamers,” Politico reports. A recent poll showed that 73% of voters want protections for beneficiaries of the Deferred Action for Childhood Arrivals program.

According to Politico, “No single Democratic attack on the president is sticking.” And polling is signaling Democrats will have trouble capitalizing on Trump’s failures or chaos. On the flip side, Democrats won competitive state legislative races in Oklahoma and New Hampshire Tuesday night in districts that Trump won handily in November.

The number of refugees allowed into the U.S. next year may be lowered to below 50,000. And the Supreme Court will let the Trump administration continue a ban on some refugees, which will immediately block the entrance of 24,000 people.

Congress passed a resolution asking Trump to condemn white nationalists and address America’s growing number of hate groups. The measure heads to Trump’s desk for his signature; he hasn’t said whether he’ll sign.

Experts disagree on the role climate change had in strengthening Hurricanes Harvey and Irma.

New legislation would prevent Trump from instituting a ban on transgender people serving in the military.

The White House slammed Hillary Clinton for the criticisms of Trump she wrote in her new book. Tap or click the video below to watch.