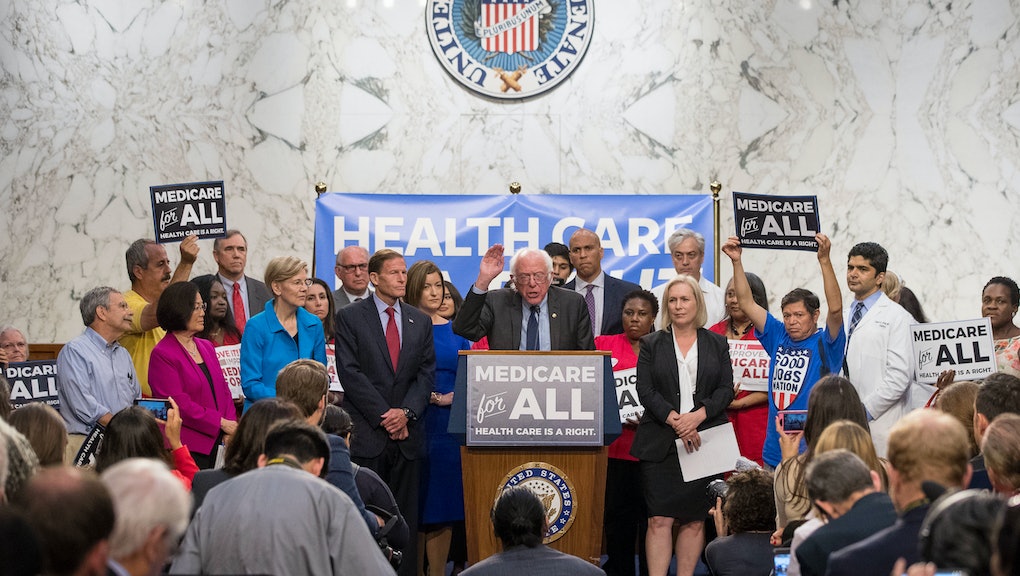 How firm is the newfound love Democratic senators have for single payer?

Every day, we bring you a different dispatch on Trump’s America. Today’s focus: How far will the Dems really go?

Thursday’s Dispatch: For Democrats, is single payer the floor or the ceiling?

For Adam Green, Wednesday had been a long time coming.

The co-founder of the Progressive Campaign Change Committee has long pushed members of Congress to support a “Medicare for all” plan. Watching Sen. Bernie Sanders (I-Vt.) along with 15 Senate Democrats unveil that bill during an event at the Capitol was a landmark moment.

Green said the goal now is to build momentum toward the eventual passage of a single-payer health care system in 2021 — hopefully after Democrats win the White House and Congress by campaigning on that promise.

When asked about other health care plans, like allowing people to buy into Medicare or lowering the program’s eligibility age, Green said such proposals are no longer the focus.

“All that is in the weeds,” Green said. “‘Medicare for all’ is the brand. And that’s what was launched today.”

But the weeds are what have scuttled single payer in the past — and could be the culprit again.

Key Democrats, including several who are considered leading 2020 contenders, gave a full-throated endorsement of Sanders plan on Thursday.

They said they were “proud” to stand with Sanders in advancing a health care plan that would see the federal government take over health care for all Americans.

But some senators made it clear their support of “Medicare for all” does not mean they will not support other bills. Anything that advances toward universal health care, they said, is worthy of support.

And while Sanders’ bill would move the U.S. far closer to universal health care coverage, three senators at the event told Mic they would support other legislation that is not “Medicare for all” — suggesting Democrats backing Sanders’ bill are further from consensus than Wednesday’s event would suggest.

Further, they all stressed their goal of achieving health care for all Americans, not necessarily a government-only health insurance market.

After saying she was “proud to co-sponsor” Sanders’ bill during the event, Sen. Kamala Harris (D-Calif.) was asked whether single payer was the floor or ceiling when it came to overhauling health care.

“Bernie’s commissioning some studies around the cost,” she said. “That’s going to be a big part of the discussion. [But] it’s unconscionable we do not have universal coverage.”

Sen. Cory Booker (D-N.J.) said “there’s lots of bills” he would support in the slow march to having “every American access quality, affordable health care.”

“This is how you make progress,” Booker said.

“I would vote for [any bill] that leads us to universal health care coverage,” Sen. Richard Blumenthal (D-Conn.) said. “Medicare for all is the best of them, but there may be other proposals worth supporting.”

In 2009, what began in the Affordable Care Act fight with a push for single payer fell apart as some key Democrats balked at the proposal. Now, with a third of Democrats supporting Sanders’ plan, the momentum for single payer is unprecedented.

Two dozen grassroots groups announced support for Sanders’ plan at the Capitol event. They will be watching to ensure, when the time comes, Democrats show up for Bernie.

Jeff Weaver, who ran Sanders’ 2016 campaign, said the direction voters wanted in 2016 drove senators to Thursday’s announcement. “This is the impact you can have when you go to the American people with a bold agenda of progressive change,” Weaver said.

Winnie Wong, the co-founder of People for Bernie said the specific proposals that will be ironed out over the coming years will, eventually, move Democratic senators to “Medicare for all.”

“I don’t know how this will all play out,” Wong said. “But what I do know is the Bernie grassroots, as we know it and as I run it, understands that the senator’s bill is the gold standard.”

Today’s question: Do you think these Democrats are now truly behind single-payer health care? Please email us your thoughts at trumpsamerica@mic.com.

Late Wednesday night, Sen. Chuck Schumer (D-Ill.) and Rep. Nancy Pelosi (D-Calif.) said they had negotiated a deal with Trump to protect recipients of Deferred Action for Childhood Arrivals without funding for a border wall, a claim Trump denied in a Thursday morning tweet.

In an updated statement Thursday morning, Schumer and Pelosi said Trump agreed to protect DACA recipients — with details on border security to be hammered out down the road. Trump added, as he was leaving the White House, that Congress is close to a deal and Republican leaders are “very much on board.”

More single payer coverage: Mic explores the ambition of Sanders’ plan. We break down the attacks Republicans will likely hurl at the proposal. Sen. Joe Manchin (D-W.V.), the Senate’s most conservative Democrat, even said he was open to studying single payer. And Sanders proposed tax hikes to pay for the bill — which Republicans pounced on heading into 2018.

Treasury Secretary Steve Mnuchin requested use of an Air Force jet during his honeymoon in Edinburgh, Scotland, earlier this year.

The Justice Department declined to let the Senate Judiciary Committee interview FBI officials over former director James Comey’s firing — a sign the special counsel is investigating his dismissal. Russia said it would have fully normalized relations with the U.S. under Trump.

Former National Security Adviser’s Michael Flynn’s son is a subject of the special counsel’s Russia probe. Facebook and Twitter’s influence are also coming under increasing scrutiny in the investigation.

In Houston, the poorest are hit the hardest by Hurricane Harvey.

The press secretary claims Obama never worked with Republicans. She could not be more wrong.

Trump said Wednesday the Republican tax reform plan will not lower taxes on the wealthy. That plan is set for release by the end of September.

“Antifa” has lately been portrayed as violent, but Mic’s Jack Smith IV spoke with someone inside an antifa group to discuss the tactics they use to infilitrate and disrupt white supremacists. Tap or click below to watch the video.