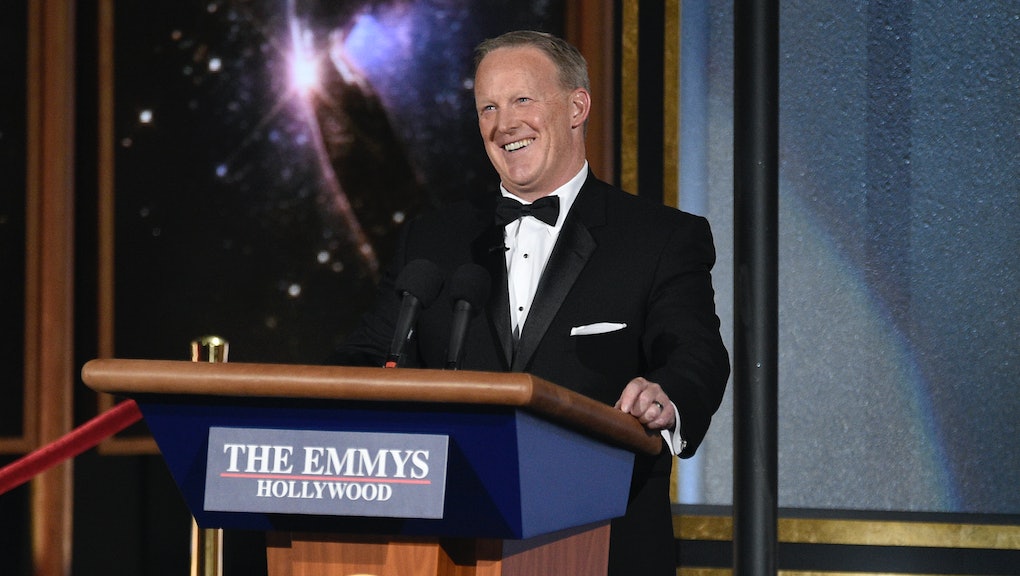 Sean Spicer got laughs at the Emmys poking fun at his lies in the White House. It’s not funny.

Former White House press secretary Sean Spicer wheeled out his signature briefing room podium at the Primetime Emmy Awards Sunday night, garnering raucous laughter from the crowd as he repeated the lie that kicked off his brief tenure as President Donald Trump’s most visible spokesman.

“This will be the largest audience to witness an Emmys, period, both in person and around the world,” Spicer said, a reference to his claim that Trump had the largest inauguration crowd ever.

But while the audience of television stars and writers laughed at Spicer’s appearance, his tacit admission that he told at least one blatant lie behind the briefing room podium is not funny.

The White House press secretary is supposed to be trusted to give factual information about the president and the administration. And it becomes a problem if the public no longer trusts the White House’s top spokesperson to give them accurate information — especially in times of crisis.

It’s something multiple people pointed out about Spicer’s appearance, which looked like an attempt to rehab his image post White House departure.

“Shorter @seanspicer: ‘I was in on the joke!’ But, it wasn’t a joke. It was from the White House, & they mocked reporters for questioning it,” BuzzFeed’s Chris Geidner tweeted.

“Just saw that Sean Spicer was at the Emmys tonight, cracking jokes about lying to the public as WH press secretary,” HuffPost’s Jennifer Bendery tweeted. “This is entertainment?”

Spicer’s lie about Trump’s inaugural crowd wasn’t the only lie Spicer either told or defended in his six-month tenure.

He defended Trump’s false claims that former President Barack Obama wiretapped him. He repeated Trump’s lie that millions voted illegally in the 2016 presidential election. He even lied about easily debunked facts, such as the size of Trump’s Electoral College victory.

“He won overwhelmingly with 306 electoral votes, the most since any Republican since Reagan,” Spicer said back in January, a false claim given that George H.W. Bush won more Electoral College votes.

Spicer has since defended his lies during an interview with Jimmy Kimmel.

“You can look at a set of facts and come out with one opinion, but someone else can say the facts are the same here and I come out with a different conclusion,” Spicer said.