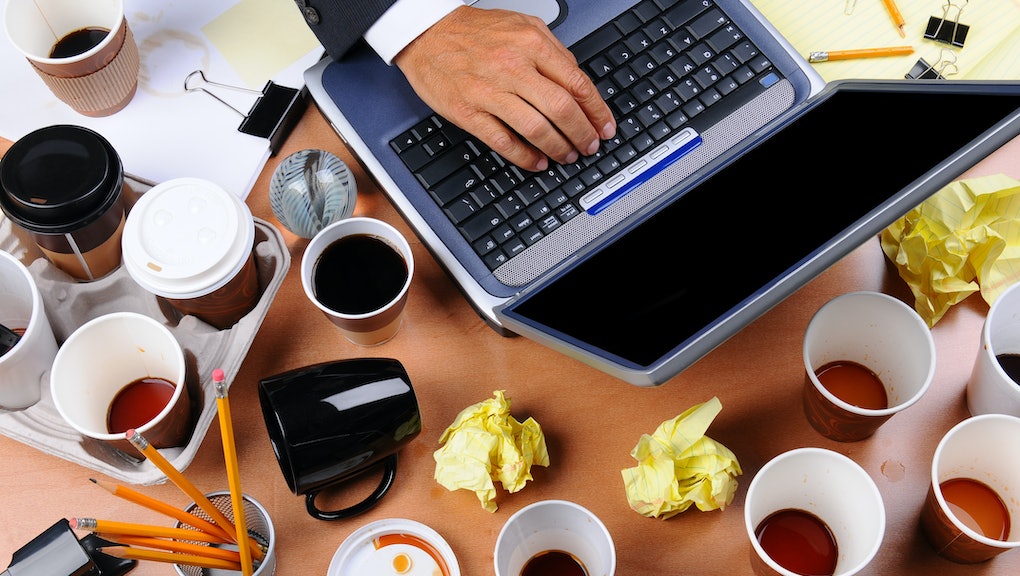 Career advice: 5 surprising ways being messy, noisy and disorganized can actually help you at work

Sloppy behavior is typically frowned upon at work: Even if you think your chronic lateness or coffee spills aren’t a big deal, no one wants to work with someone who is disrespectful — no matter how productive they may be.

Indeed, four in 10 employers said they had fired an employee for being late in a 2016 CareerBuilder survey, suggesting conventional wisdom on punctuality is unlikely to lead you astray.

That said, not all workplace conventions should be accepted at face value, said economist Tim Harford, author of Messy: The Power of Disorder to Transform Our Lives, in a phone interview with Mic. Harford’s titular example is the clean desk, which he said employers often demand without thinking through the reasons.

After all, a messy desk may actually be a sign of someone working especially hard (more on that below). By shackling ourselves to arguably arbitrary rules, we sometimes undermine our ability to do our jobs as well as possible.

Here are five ways the conventional wisdom about productivity might be leading you astray.

One relatable job gripe, particularly in an age when communal workplaces are increasingly common, is that offices are getting too noisy. One reason why, according to a 2010 paper from Cornell University researchers, is that certain kinds of noises — like coughing or laughter — trigger a spike in epinephrine, more commonly known as the “fight-or-flight” hormone.

But other research has found that not all noises are bad as far as workplace creativity is concerned. A more recent article from researchers at the University of Illinois at Urbana-Champaign found the optimal amount of noise for creative tasks is around 70 decibels, which is actually twice as loud as typical conversation in an office or restaurant.

So, if you feel like you’ve hit a wall on your latest project, you might try turning on the television or radio — or pulling up some white noise on YouTube. To be respectful to colleagues, use headphones, or keep volume low: A room with the TV on usually clocks in at about 76 decibels — closer to optimal volume, according to the Illinois paper, but still loud enough to annoy people.

2. Neat desks make it harder to find what you need

The virtues of messiness aren’t just for creatives, Harford said, and messiness can even have some organizational virtues.

For example, research has surprisingly shown that people who rigorously file away their papers are less likely to make use of the information that’s written on them. This suggests messy piles of paper might be an underappreciated form of task management.

“So much of what comes across our desk doesn’t have a place. We don’t know quite what it is; we can’t categorize it in a straightforward way,” Harford said. “File it too fast, [and] you haven’t really had time to understand why it’s important or whether it’s important.”

Part of this is practical: People who aggressively file every new piece of information that comes across their desk quickly accumulate more files than is manageable, making it more difficult to find things.

But stacks of paper, though unsightly, can arguably be an intuitive way to prioritize information. You’ll go looking for the things you need, Harford said, meaning over time, the most important information naturally rises to the top.

3. Staying too focused on a single project could keep you from finishing

Sure, a good manager is going to help their employees prioritize what to work on. But too much focus can be a liability for your career, while those who juggle a few projects at once can see great success.

Harford’s book points to the example of Michael Crichton, who at one point in the early 1990s scored a hat trick as the man behind the bestselling book Disclosure, the world’s highest-grossing film (Jurassic Park) and the top-rated American TV show, ER.

And there are less anecdotal examples, too. A two-decade-long study of 40 scientists identified just two reliable predictors of long-term success. One of them is unsurprising: Scientists who published more than five “high-impact papers” by age 45 were more likely to enjoy longer, more productive careers.

Less intuitive, however, was the finding that the most successful scientists were also more likely to engage in research in several fields. Other “peculiar” behavior included “working on several projects simultaneously” and having an “abhorrence of administrative duties.” Sound familiar?

“We’re attracted to stuff that’s new,” Harford said. “So when you switch to a new area, you have a lot of energy for it. ... It really hurts to be working on something and not making progress. There is a question about how to handle it because there is a cognitive load to working like this.”

Harford personally uses a vision board that lists all the projects he’s currently working on, which he said accomplishes two feats: For one, tasks that get stuck on the back-burner are less likely to be forgotten entirely. If you get stuck on a current project or problem, you’re also less likely to waste time if you keep a list in front of you with other ways to stay productive.

“It has that physicality,” he said.

4. You seem zoned out when you stick to the script

Being excessively beholden to a certain way of doing things might also be a sign that you’re not being receptive to new information. Politicians, who are often criticized for being too scripted, are a good example of how sticking to the script can actually backfire.

But this effect is also vivid in the customer service industry. Most customer service representatives receive detailed scripts for getting through support calls, Harford said, which is a mistake because real customers are rarely going to have the same questions. “If they’ve said something original and your response is not original, it’s not a response,” Harford said.

It’s important for those in any profession — but particularly those who deal with customers — to be able to improvise and show people you’re listening to them. Such a skill is so important that companies ranging from Google to J.P. Morgan often enlist comedians for corporate improv workshops.

Other practical ways to be a better listener at work? Ask lots of open-ended questions to help get people talking. Use active body language — crossing your arms and turning your body toward the speaker, for example — to signal that you’re listening to someone. And don’t be afraid to improvise a little.

5. Disorder can lead to greater creativity

No one likes getting held up when they’re trying to get to work, which is why it’s somewhat surprising Oxford researchers found that a 2014 strike of London transit workers actually produced a net economic benefit.

Constraints, it would seem, can actually help people be more creative, and many British straphangers — stripped of their usual routes — ended up finding better ways to get to work.

Wake up on the wrong side of the bed? Other research has found that seeking out new routes to work can help cranky employees reset their moods and prevent whatever is upsetting them from bleeding over into their work responsibilities.

Steve Jobs seemed to recognize the power of a little disorder, according to Harford. One of Jobs’ less-embraced design ideas was a plan to design Pixar offices so they only had one bathroom. By forcing everyone to use the same bathroom, Jobs thought employees would be forced to interact and collaborate more.

As with most things in life, moderation is key. Just as Jobs’ plan was admittedly extreme, Harford said it would be “ridiculous” to apply the prescriptive powers of messiness too broadly. You wouldn’t want to tell an accountant who’s good at their job, for example, to start being messier with their clients’ information.

Still, most people’s jobs are less precise or clear-cut. Many have tasks added to their day-to-day responsibilities that weren’t necessarily included in the original job description, and most people at some point will have to rise to the occasion when something doesn’t go as planned.

In those cases, you’ll need to embrace the chaos and think on your feet, something Harford said will become difficult if you become too set in your ways. A degree of messiness, noise and inconvenience seem to help employees get prepared for when those unpredictable times inevitably arise.