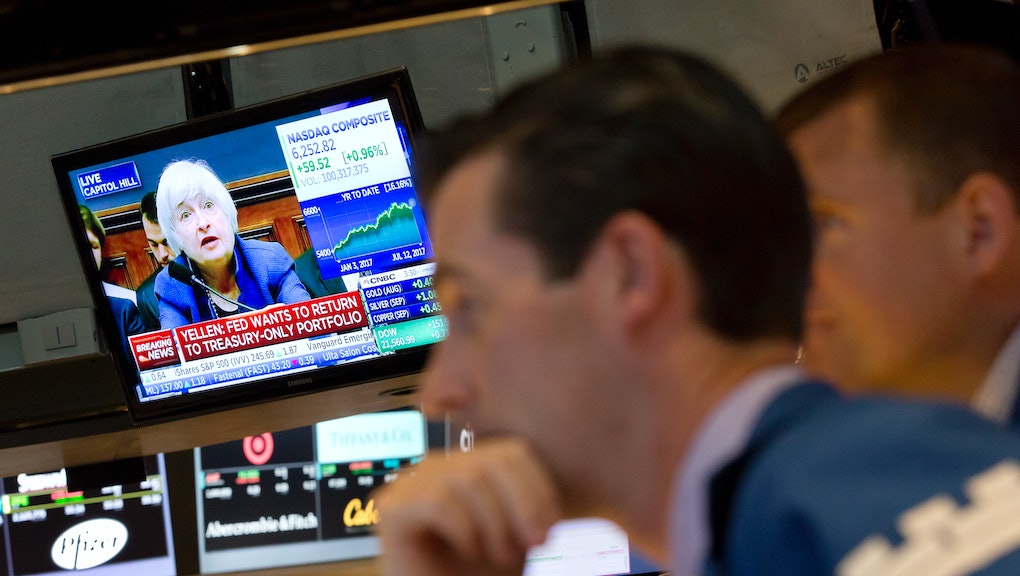 What does the Federal Reserve’s balance sheet announcement mean for you? 3 key Fed meeting takeaways

A rising tide lifts all boats — but how do you make sure none of the boats break when the tide goes back out?

That’s one way to think about the dilemma currently facing the Federal Reserve and its chair Janet Yellen. On Wednesday, the Fed announced that the benchmark U.S. interest rate will remain where it is — 1% to 1.25% — but the central bank is taking a different action and initiating a “balance sheet normalization program” starting in October. What does this mean?

After the financial crisis, the Fed used so-called “quantitative easing,” an unconventional move to protect the value of American nest eggs. Called “QE” for short, this program consists of a central bank buying up government securities (like bonds) in order to lower interest rates and increase money supply, meaning the cash in circulation. The central bank effectively “raised the tide” by buying trillions of dollars in mortgages and stocks.

When investors panic, they try selling their assets, which tends to make the price of all assets fall even more — but with the government as a buyer-of-last resort, the value of people’s home prices and retirement accounts was able to stabilize, and even start climbing again.

Not so fast. The problem is that the Fed eventually needs to sell this “balance sheet” — otherwise there’ll be no wiggle room for them to work with if the economy takes another nose-dive. Yet, “as the Fed downsizes their portfolio, we risk... higher [interest] rates, a sharp stock market correction, and a headwind to already slow economic growth,” as Bankrate chief financial analyst Greg McBride explained in an email.

There is some good news. Unlike increasing the federal funds rate directly — which has happened twice in 2017, and has spurred increases in the cost of using a credit card and buying a home — changes to the balance sheet don’t have as many short-term consequences for consumers, said Bankrate economic analyst Mark Hamrick.

But Wednesday’s decision is likely to have longer-term effects that you’ll want to begin preparing for. Here’s what to know.

1. Home and stock prices may stop climbing so quickly

One main concern for everyday savers and homeowners is that the Fed’s action Wednesday makes it less likely home prices and stocks will keep rising as much as they have during much of the recovery. The Fed used a few different levers to achieve that price appreciation, according to Hamrick, and now it is putting those mechanisms away.

“As those tools have been employed, unusual things have happened, not least of which is the re-inflating of the stock market,” he said. “The housing market has enjoyed substantial home price appreciation in many markets, and that to some degree is some function of what the Fed has done to lower interest rates and lower mortgage interest rates. So some of things will become less so.”

Therefore one possible consequence is that buying a home or stocks won’t pay off as quickly or sharply as in recent years, said David Karp, a partner at PagnatoKarp, a fiduciary investment adviser.

“A lot of the robust economic activity has been driven by the de-facto stimulus of quantitative easing,” Karp said. “If you do believe a rising tides lifts all ships, why is it imprudent to think that a lowering tide will lower all ships? The economy’s not bad, it’s better than it was. You wonder if it’s strong enough.”

Wednesday’s action was muted in part because of concerns the economy isn’t strong enough, and the Fed wants to project caution, said Joe Heider, president of Cirrus Wealth Management.

“The reduction will be a gradual,” Heider said. “The market may react in a short term knee-jerk reaction, but I think ultimately it’ll be a slow glide path and one that will have very little impact over the market over any extended period.”

2. Inflation — and wages — are still a concern

One main reason the Fed wants to be cautious is that the recovery has been heavily concentrated on asset prices, but not the price of labor.

When stocks and home prices go up, that’s great for those who own property and stocks — but it’s also a sign economic gains are not being distributed broadly. As Hamrick put it, “the middle class could still use some love.”

“In my mind the strong earnings numbers we got from the Census Bureau, they fuzz up the picture,” Bivens said. “The inflation the Fed wants to avoid is the inflation is that happens when the economy is overheating, when workers really have the leverage and are demanding higher wages. We haven’t seen that dynamic in decades.”

Falling or slowly rising prices in the short term is good for consumers, Bivens said, because if you’re spending less on gas or food, then that’s more money in your pocket. But in the longer term, prices rise when workers are earning the higher wages to support them, and that’s just not happening yet.

What is some evidence that low inflation is a big concern for the Fed? When it last met, the Fed wrote in its meeting minutes that inflation was “slightly below” target. Today’s announcement reads simply that inflation is “below” target, as the Financial Times noted. A small change, to be sure — but with the Fed, every word must be scrutinized.

3. There are still good opportunities for savers

Because the Fed took no action on the prime interest rate, there’s not as clear an immediate takeaway for consumers, since that federal funds rate is used as the benchmark by banks to decided what to charge lenders.

But savers could see some benefits slowly unfold because of today’s action, if only gradually, said Ken Tumin of DepositAccounts.com.

“Consumers do have time before they have to absolutely worry about higher rates from a loan point of view,” Tumin said. “But it could... slight[ly] push up long-term rates a little bit; that would include... long-term CD[s].”

It’s an important to get your finances in order while interest on debt stays relatively low: “Use the reprieve from rising interest rates to pay down costly credit card debt,” said McBride. “The next Fed hike – whether December or sometime in 2018 – will push your rates even higher.”

For savers who are worried about how their retirement accounts will fare in light of falling stock prices, there are also defensive actions you can take, said PagnatoKarp’s Karp. “We don’t necessarily see a single reason to run for cover,” Karp said. “We’re balancing ... looking for things that are more reasonably priced.”

Like what? Karp said that overseas markets, stock in companies that are located in other countries, are less likely to be as affected by a sell-off here in the United States. Kiplinger also published a helpful list of some “defensive” investments, which often include companies working in health care, or utilities like Verizon and AT&T. (Of course, the most defensive investment of all is a well-diversified portfolio.)

Some other notable moments in the Fed announcement? Fortunately, the central bank thinks that the economic impact of Hurricanes Harvey and Irma is “unlikely to materially alter” the economy in the long term. The Fed’s economic projections for the next three years — also released Wednesday — projects the economy growing at a near-2% pace until 2020.