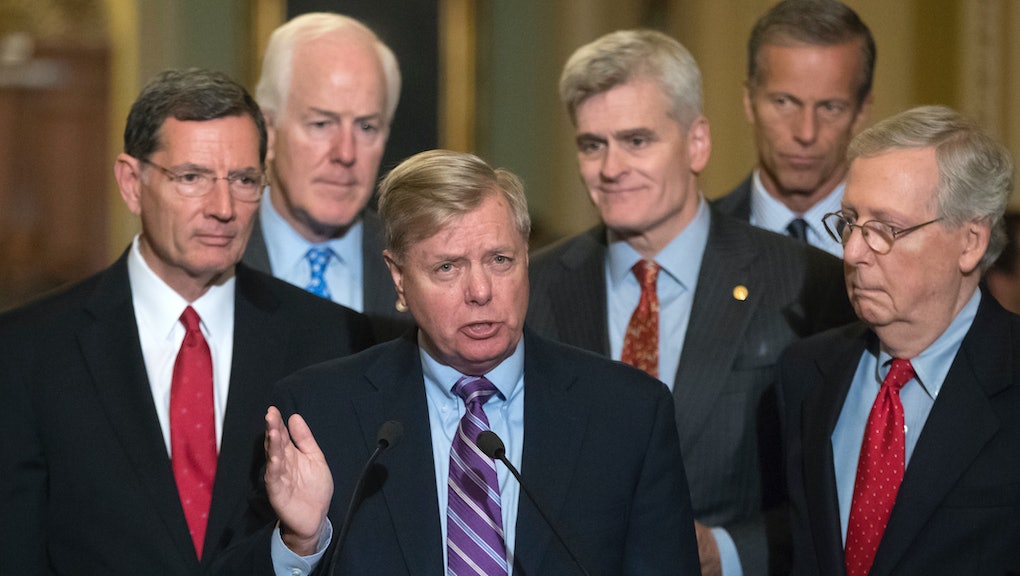 What is a CBO score? The methodology behind assessing the Graham-Cassidy health care plan

The Senate only has another 10 days to pass health care reform with a simple majority — and there’s a chance they could actually do it.

The potential legislation has been decried by its opponents, with the American Medical Association predicting the bill “would result in millions of Americans losing their health insurance coverage, destabilize health insurance markets and decrease access to affordable coverage and care.”

Americans may not know the more specific impacts of the legislation until after it’s passed, though. The Congressional Budget Office said Monday that while it aims to release a limited assessment of the Graham-Cassidy bill and its impact on the on-budget deficit by early next week, a full assessment — including the bill’s impact on health insurance coverage and premiums — is still several weeks away.

That means the CBO score may not come in time for the bill’s Senate vote, as Senate Republicans are eager to pass the bill before Sept. 30, when the Senate parliamentarian has ruled that Republicans will lose the ability to pass reconciliation bills with a simple majority. Instead, bills from October onward will require 60 Senate votes to pass — meaning any legislation will need Democrats’ support.

The CBO score’s delay is a setback for the Graham-Cassidy bill’s detractors, as CBO scores for Republicans’ past attempts at health care reforms — which estimated as many as 23 million Americans could lose their health care — helped to secure the bills’ demises.

But what goes into the estimate at the heart of the health care debate? Here’s what you need to know about CBO scores and the methodology behind them.

What is a CBO score?

A CBO score is a cost estimate provided by the nonpartisan Congressional Budget Office, which predicts the potential impact a piece of legislation will have. The agency was first established as part of the Congressional Budget and Impoundment Control Act of 1974, which dictated that for any bill raised by committees outside of the House and Senate appropriations committees, the CBO must provide an estimate of the costs incurred by carrying out the bill for that fiscal year, along with the next four years thereafter.

In practice, former CBO director Doug Holtz-Eakin said in an interview with the Atlantic, the practice is slightly less clear-cut.

“Congress can waive the CBO score at any time. It gets done differently in every circumstance,” Holtz-Eakin said, noting that individual amendments often aren’t scored by the CBO, even if the base bill is.

As a nonpartisan agency, CBO scores simply provide an objective analysis of a bill’s impact rather than make a recommendation about the legislation at hand, the agency notes, as “choices about public policy inevitably involve value judgments that the agency does not and should not make.”

Even though the full report is still a few weeks away, this requirement will be fulfilled for Graham-Cassidy when the CBO releases its first limited assessment, Senate Minority Leader Chuck Schumer noted in a speech Monday on the Senate floor.

The reason behind the CBO score’s long delay is thanks to the agency’s thorough methodology when it comes to determining a bill’s potential impact. According to the CBO website, the division draws from a variety of sources for their analysis, including consulting relevant research literature and data collected by both government and private organizations. The CBO also gets input from numerous outside experts, including those on the agency’s panels of economic and health advisers.

When it comes to a bill’s effect on individual states, Holtz-Eakin noted, the agency will often compare a bill with similar past legislation and analyze its effects, as well as reach out directly to individual states to determine how they might respond.

The CBO’s process begins even before the bill’s final text is released, according to Holtz-Eakin. Congressional staff will be in touch with the CBO as the bill is being developed, and the agency will deliver an initial estimate of the potential implications based on a basic outline of the bill.

Once the CBO has made its analysis, its reports are reviewed internally, as well as by outside experts, for “objectivity, analytical soundness and clarity.”

Of course, the CBO’s judgments aren’t a perfect science. The agency noted on its website, for instance, that it only considers the potential legislation in its current form with relation to other U.S. laws as they presently exist. If a potential bill — or another law that would affect it — changes, the CBO score won’t reflect that change. This means that sometimes the agency’s predictions have been a bit off-base, leading Republicans to discredit the agency.

“If you’re looking at the CBO for accuracy, you’re looking in the wrong place,” former White House press secretary Sean Spicer said during a March briefing, as quoted by PolitiFact.

Though predicting the exact impact of national legislation remains impossible, however, experts on both sides of the aisle maintain the value of the information the agency provides, the Washington Post noted.

“They’ll describe, to the best of their ability, their judgment. And this is a judgment, and that’s why they get paid the big bucks,” Holtz-Eakin said about the assumptions made by the CBO. “It’s a hard job. But they have to put a number on it.”