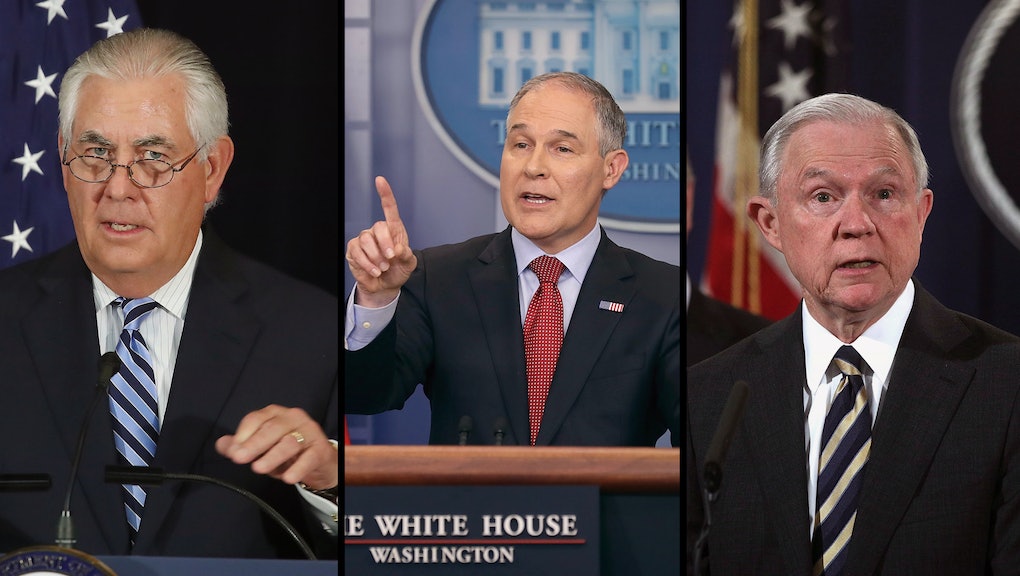 In a week roiled by yet another installment of the tumultuous debate over a possible replacement for the Affordable Care Act, much of the political news media has focused on Congress and on late-night talk show hosts.

But actions and decisions across multiple federal agencies continued to further the Trump agenda. Here are five stories from the week you may have missed:

Health and Human Services Secretary Tom Price has taken privately chartered planes around the country on taxpayers’ dime at least 24 times since May, according to a report in Politico.

Only eight months into the Trump presidency, the cost of Price’s flights appear to have exceeded $300,000. Both of his immediate predecessors at Health and Human Services flew exclusively commercial.

In a statement to the Washington Post, Price’s assistant secretary for public affairs said the private flights were chartered because Price’s office is “making sure he is connected with the real American people.”

On Tuesday, the Senate Energy and Natural Resources Committee voted to confirm a controversial Trump nominee to the Department of the Interior. Joe Balash, Trump’s nominee to be assistant secretary of the interior for land and minerals management, has openly supported opening up Alaska’s arctic refuge to oil and gas drilling, a move environmental advocates say would be disastrous.

The oil industry has already celebrated Balash’s nomination. “We welcome the pick of Mr. Balash as the assistant secretary of land and minerals management,” Erik Milito of the American Petroleum Institute said in a press release issued by the Interior Department. API is an oil industry lobbying group and reportedly one of the largest funders of efforts to oppose climate change policy.

Balash was approved by the committee with only one “no” vote, from Sen. Al Franken.

Secretary of State Rex Tillerson admitted that Iran is in “technical compliance” with the terms of the nuclear nonproliferation deal put in place during the Obama administration.

Tillerson added the caveat that while Iran may be complying with the deal, it is failing to live up to the expectation that the deal removes a “serious threat” from the region.

Earlier in the week, President Donald Trump gave a bellicose speech before the United Nations General Assembly lambasting Iran and the terms of the nuclear deal.

Trump claims to have made a decision about whether or not the United States will remain a party to the deal but has refused to disclose it publicly.

Employees of the Environmental Protection Agency were forced to attend a mandatory training session designed to admonish leaking of federal information, according to a report from the Associated Press.

The session is part of a larger effort by the Trump administration to crack down on leaks across the executive branch.

“Enemies of the United States are relentless in their pursuit of information, which they can exploit to harm U.S. interests,” a document from the training reportedly read. It also listed several examples of high-profile government leaks.

In a Thursday speech to law enforcement officials in Boston, Attorney General Jeff Sessions said he believes some of the undocumented children entering the country as unaccompanied minors are “wolves in sheep clothing.”

“We are now working with the Department of Homeland Security and [the Department of Health and Human Services] to examine the unaccompanied minors issue and the exploitation of that program by gang members who come to this country as wolves in sheep clothing,” Sessions said, referring to the Unaccompanied Alien Children program, which helps settle minors who enter the country without parents or legal guardians.

The program, which is run by the Office of Refugee Resettlement, works to place unaccompanied children in familiar communities that will be in the best interest of the child. But Sessions accused the program of placing minors in places with high levels of gang activity.