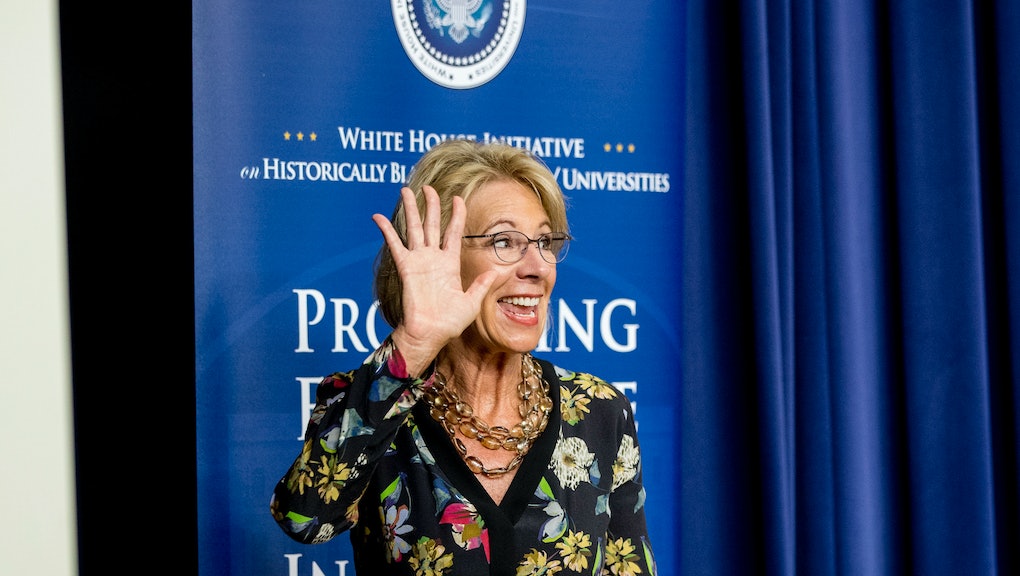 The Trump administration formally rescinded Obama-era guidance to colleges and universities that laid out how they should investigate sexual assault allegations under Title IX.

Education Secretary Betsy DeVos announced her intention to roll back that guidance — which the Obama administration issued in a Dear Colleage letter back in 2011 — earlier in September.

However the Department of Education officially rescinded the guidance on Friday, with DeVos issuing interim guidance while she seeks input on more permanent guidance.

“This interim guidance will help schools as they work to combat sexual misconduct and will treat all students fairly,” DeVos said in a press release. “Schools must continue to confront these horrific crimes and behaviors head-on. There will be no more sweeping them under the rug. But the process also must be fair and impartial, giving everyone more confidence in its outcomes.”

In her own Dear Colleague letter, Candice Jackson, acting assistant secretary for civil rights at the Department of Education, said that while the guidance was “well-intentioned,” it ultimately, “led to the deprivation of rights for many students — both accused students denied fair process and victims denied an adequate resolution of their complaints.”

“The guidance has not succeeded in providing clarity for educational institutions or in leading institutions to guarantee educational opportunities on the equal basis that Title IX requires,” Jackson wrote. “Instead, schools face a confusing and counterproductive set of regulatory mandates, and the objective of regulatory compliance has displaced Title IX’s goal of educational equity.”

Sexual assault survivors and advocacy groups, however, panned DeVos’ decision to roll back the guidelines.

Many of those groups questioned whether DeVos even understood the guidance the Obama administration created.

“To schools, they’re saying, ‘Don’t worry, we will no longer be holding you accountable, the pressure is off,’” Michele Dauber, a Stanford University law professor, said in an interview with Mic earlier in September. “And to victims, the Trump administration is saying, ‘You are on your own, the government is no longer your ally, the government is no longer going to protect you, so just go back to not telling anyone.’”