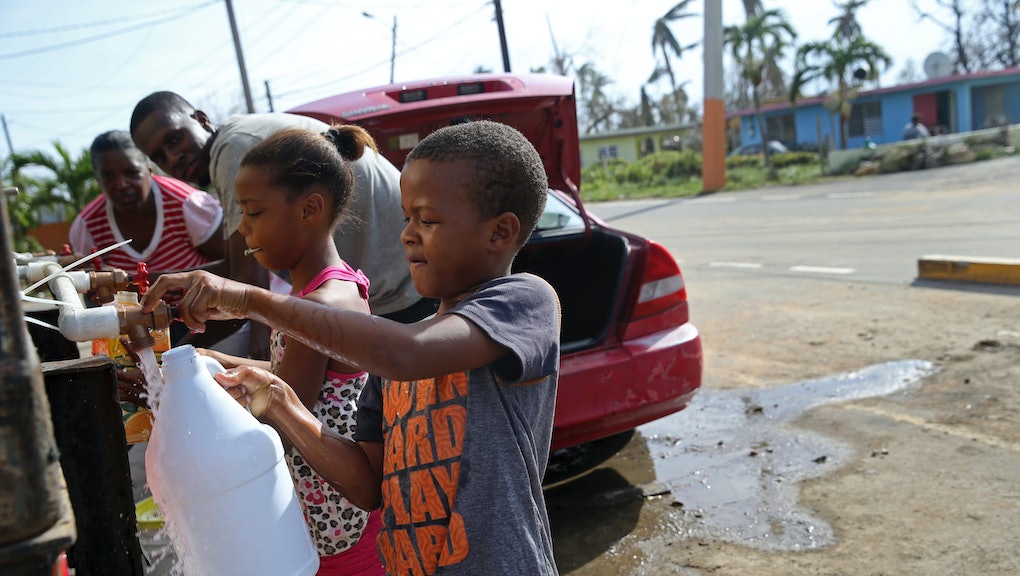 Days after Hurricane Maria, the situation in Puerto Rico is dire

Five days after Hurricane Maria made landfall in Puerto Rico, the island is devastated: The storm left at least 10 people dead, knocked out power and cell service and decimated Puerto Rico’s infrastructure and agriculture industry.

Even more damage to Puerto Rico from Hurricane Maria could be imminent: The Guajataca Dam in the northwest part of the island was damaged by Maria and was in danger of failing Monday morning, NBC News reported.

“Stay away or be swept away.”

The dam’s failure could lead to flash flooding and put some 70,000 people in danger. According to NBC News, the National Weather Service issued a warning urging residents to leave evacuation zones, telling them “Stay away or be swept away. ... River banks and culverts can become unstable and unsafe. Stay away from evacuated areas until told by emergency officials it is safe to return.”

The loss of infrastructure has complicated efforts to warn residents about the dam’s possible failure — lack of cellphone service and electricity on the island has meant that authorities had to reach residents in person to alert them, CNN reported Sunday.

Still, some residents were left in the dark about the dangers. David Castro, who lives near the dam, told NBC News that he only found out about the danger of possible failure from neighbors.

“We hear a lot of commotion and everybody’s running,” Castro said. “But there’s no communication. We didn’t know where to go.”

Much of the damage from Maria will affect the island for months to come — maybe even longer. As José A. Rivera, whose plantain farm on Puerto Rico’s southeast coast was destroyed by the storm, told the New York Times Sunday, “There will be no food in Puerto Rico. ... There is no more agriculture in Puerto Rico. And there won’t be any for a year or longer.”

As the Times reported, Puerto Rico lost 80% of its crop value due to Hurricane Maria, after the storm destroyed essential crops like plantains, bananas and coffee. Dairy and chicken farms were also flattened, the Times reported.

The loss of so many of the islands homegrown crops will likely affect the food supply for months to come, forcing Puerto Rico to import even more food.

The lights are still out

With the electrical grid on Puerto Rico knocked out by Hurricane Maria — and emergency generators at the island’s hospitals in danger of running out of fuel — electrical engineers from the New York Power Authority arrived on the island via a donated JetBlue flight to help take stock of the situation, NBC News reported.

Still, authorities say it will likely be a long time before the entire island has power again — possibly months, according to Puerto Rico Gov. Ricardo Rosselló, CNN reported Friday. Not having power on the island affects everything from ATMs to sewage treatment to air conditioning, according to CNN, putting some of the island’s medically fragile residents at risk.

In a Tweet on Sunday, Puerto Rican columnist Armando Valdés described finding elderly residents of a high rise tower trapped with no food, water or electricity. Some of the residents, he said, were “severely dehydrated” or in need of dialysis.

Celebrities are speaking out

A handful of stars with connections to Puerto Rico joined New York Gov. Andrew Cuomo at a press conference Sunday to draw attention to the severity of the damage, Deadline reported Sunday, including Jennifer Lopez and Rosie Perez.

Lopez addressed the crowd in both Spanish and English, saying “Lives have been lost. Power is down across the entire island. ... More than 15,000 people have been forced into shelters, and the storm has devastated the lives of thousands of others.” Days earlier Lopez had revealed in an Instagram video that she hadn’t yet heard from family in Puerto Rico.

In a tweet, Cuomo announced that Lopez had also contributed a personal donation of $1 million toward relief efforts.

Singer Ricky Martin donated $100,000 toward hurricane relief in Puerto Rico and launched a fundraising page. In the description, in both English and Spanish, he wrote, “Dear friends, Puerto Rico is going through one of the toughest times in history, and the island desperately need[s] us. ... For this reason, I decided to create this page to collect funds to provide the basic needs and rebuild all that was lost.”