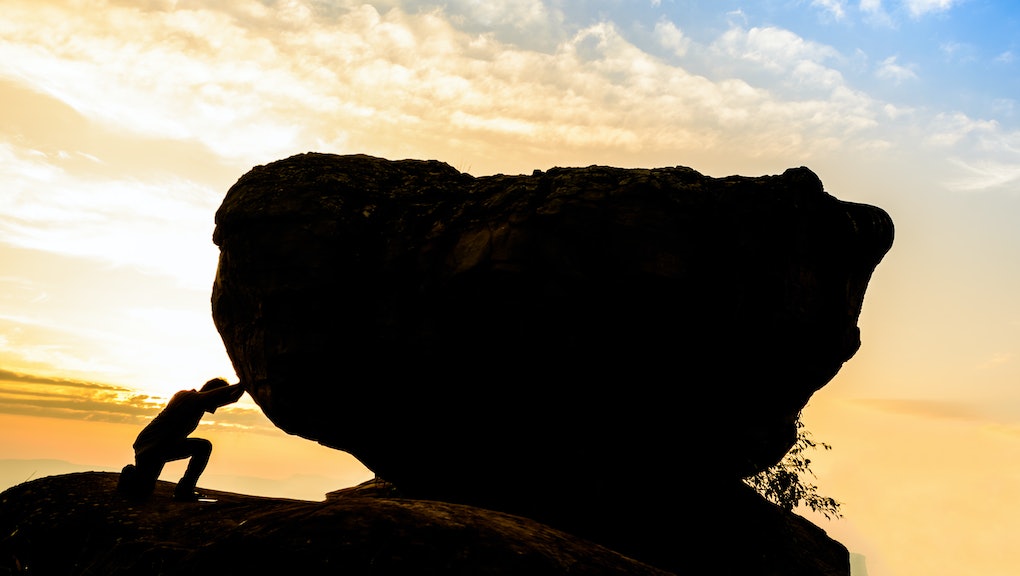 This is the best way to deal with failure, according to science

When you fail to achieve a goal or face a setback, whether in the workplace or elsewhere, you might respond in one of a couple ways: by raging at the futility of it all, or by calmly and rationally analyzing why you failed. Which is best?

Surprisingly, an emotional response might be the better instinct, at least according to a new paper from researchers at University of Kansas, Ohio State University and Stanford University.

That’s because people who are prompted to think about or reflect on their failures are actually more likely to slack off at similar future tasks — while those who approach failure in a more emotional way are more likely to do better next time, the research suggests: No pain, no gain, essentially. In phone interviews with Mic, the study authors said their findings could apply to a wide range of professional and personal settings, from a stock broker who makes a bad trade, to a stay-at-home parent who forgets to pack a kid’s lunch.

“We are programmed to not feel bad,” said Selin Malkoc, a marketing professor at the Fisher School of Business at the Ohio State University. “But feeling bad might actually be a good thing if you’re using it to persevere in the future.”

Why might feeling your feelings after a failure be helpful? When you try to merely analyze what went wrong, you’re more likely to engage in self-protective behavior than self-improving behavior, the authors found. In other words, you’re more likely to grasp for explanations that make you feel better — rather than ideas that will actually help you improve. In the long-run, the sense of anguish we feel when we fail seems to be useful.

“A lot of the examples of the emotions we try to get rid of... [are] because, they, right now, aren’t helping me, and I don’t like feeling bad,” said Noelle Nelson, a professor at the University of Kansas who also worked on the study. “It’s the tradeoff between what’s good right now, and what will help me in the future.”

To arrive at their findings, researchers recruited 98 undergraduates and gave them a task that involved researching blenders online — which was actually set up to be impossible. Respondents were given a series of specifications to look for: The blender had to have a minimum of five speeds, for example, but subjects also had to look for a model with the lowest possible price. If they found a blender that was cheaper than a model the team said they’d already found, the subject could win a $50 cash prize.

Then, subjects performed a similar second task, which also involved researching prices online, this time looking for a gift for a friend.

If you fail at something that’s going to come up again — and you feel bad — you will improve.

What the authors found was that subjects who got the emotional prompt spent more time looking for a cheaper, better gift than those who got the reflective, cognitive prompt. The authors said their findings are particularly pertinent in a professional setting, where people generally have a core responsibility they need to execute on each day. Really feeling a sense of failure, they said, spurs our motivation when we encounter similar tasks later on.

It isn’t particularly difficult to simulate the results of this experiment in your daily life, the authors explained. Noelle said people could write down their emotions in the wake of a failure, but that they could also likely achieve a similar effect by simply taking a moment to “think through” the error and resulting feelings.

A final caveat? The cognitive approach — asking yourself why a failure happened — is not necessarily useless, and may particularly help people persevere when they’re facing truly difficult odds. That’s according to another, separate paper based on interviews with American Idol contestants, some of whom had auditioned for the show as many as four times.

In that paper, the cognitive approach to failure — when contestants rationalized, say, that the weather or judges’ biases were to blame — helped them stay motivated despite setbacks.

Still, the sociologist behind the paper, Junhow Wei at Pennsylvania State University, pointed out that it’s fair to question whether this perseverance is always rational. After all, blaming external factors may be necessary to persevere if you aren’t actually talented.

“It’s helpful when people experience failure to focus on the future and the possibilities that may come ... rather than beating a dead horse,” Wei said. “To open our eyes to other endeavors that better fit their experiences and abilities, but that might be rewarding. That’s what a lot of these contestants didn’t have.”

Asked about American Idol contestants’ perseverance, Noelle also pointed out that trying something over and over again isn’t necessarily the same as actually improving. By rationalizing their failure, contestants may also give themselves a free pass on the more difficult task — of actually improving their skills and making it to the next round.