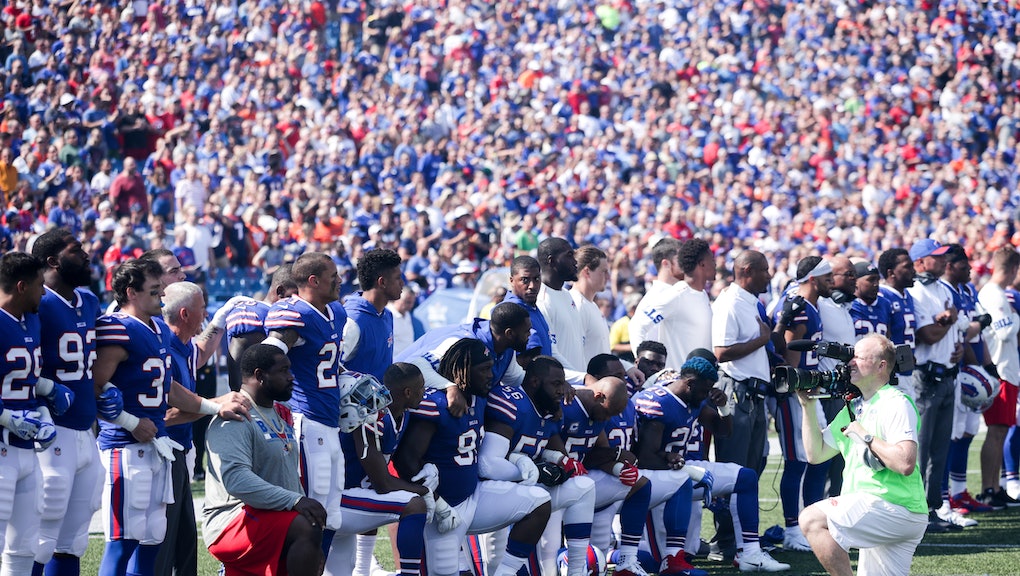 At least 40 U.S. senators tweeted statements in January honoring King — shortly before voting to confirm Attorney General Jeff Sessions, who King’s widow, Coretta Scott King, fought doggedly to keep from becoming a federal judge in 1986 due to his alleged racism.

That same month, at least two Republican lawmakers shared tributes to King on social media, even as they backed legislation that criminalized nonviolent protest, King’s signature strategy. President Donald Trump himself tweeted on Jan. 16, “Celebrate Martin Luther King Day and all of the many wonderful things that he stood for” — mere months before insisting there were “very fine people on both sides” of a white supremacist rally in Charlottesville, Virginia.

King hasn’t always been a consensus American hero. But you’d never guess it by how fluidly people invoke his name while opposing what he fought for. In light of this superficial lip service, it’s easy to forget that it took Congress until 1983 to agree that King’s birthday should be a national holiday (six sitting Republican lawmakers, including Arizona Sen. John McCain, voted against it).

And the protests that made King such a lionized figure were deeply unpopular in his day. A Gallup poll from August 1963 found that 42% of Americans had an unfavorable view of the March on Washington, where King would make his famous “I Have a Dream” speech two weeks after the poll was conducted. A 1966 poll, also from Gallup, saw 63% of respondents mark King negatively on a “scalometer” that asked them to rate him on a scale from +5 to -5.

It’s hard to know for certain if a similar historical turnaround will mark the protests currently rocking the NFL. But after a weekend that saw Trump call for NFL players who refuse to stand during the national anthem to be fired — and hundreds of players responding by doing just that — it’s equally hard not to speculate what this moment will look like 50 years from now.

History suggests that Americans will rewrite it all — that the demonstrations former San Francisco 49ers quarterback Colin Kaepernick started will be recast as a cause that most fundamentally supported. They will flatten the opposition he and his supporters faced into a vague vision of national unity. And like with the civil rights movement, they will act as though it was all part of our country’s inevitable march toward glory — while largely ignoring the crimes that made it necessary in the first place.

These crimes lend important context. In our obtuse debate over patriotism and First Amendment rights in these NFL protests, it’s become commonplace to gloss over the fact that Kaepernick was agitating against racism.

“I am not going to stand up to show pride in a flag for a country that oppresses black people and people of color,” Kaepernick, 29, told the NFL after one of his first demonstrations in August 2016. “To me, this is bigger than football and it would be selfish on my part to look the other way. There are bodies in the street and people getting paid leave and getting away with murder.”

Kaepernick’s reasoning is reflected in the data, which shows that black Americans made up roughly one-quarter of people shot and killed by police in the United States in 2016, despite being 13% of the general population. What’s more, their killers are almost never held to account. Eric Garner, Michael Brown, Terence Crutcher, Philando Castile, Sylville Smith and Alton Sterling are just six of countless black men whose unjust deaths have gone unpunished in recent years.

Yet 61% of Americans polled by Reuters/Ipsos in September 2016 disagreed with Kaepernick’s protest, while 72% thought it was “unpatriotic.” The takeaway seems to be that Kaepernick’s detractors either don’t think police violence against black people is a cause worth protesting against, or that they believe their right to have their rose-colored view of America go unchallenged should take precedent over black people demanding equal rights.

That these viewpoints have been so effectively shrouded in the guise of patriotism shows that patriotism cuts in many directions. Confederate General Robert E. Lee fancied himself a patriot, too — after the armies he led decided they’d rather secede from the U.S. than live in a country that didn’t allow them to own black people as slaves. Once the Civil War ended, the Union victors chose to let the Confederates rewrite history rather than reckon head-on with the racism and sedition Lee’s cause represented.

“By the end of the 19th century ... ‘the forces of reconciliation’ [between North and South] had ‘overwhelmed the emancipationist vision’” that took freeing slaves as a requisite, historian Eric Foner wrote in 2001. “Another way of putting it is that the Confederacy lost the war on the battlefield but won the war over memory.”

Americans are still suffering because of this decision. We live in a nation where statues of Confederate leaders — erected in large part to intimidate blacks — are the sites of dramatic cultural conflict. Many whites see removing these monuments as a direct affront to the spirit and heroism they believe defined the rebel cause. Hundreds of white supremacists marched on Charlottesville in August to protest the removal of one such statue, leaving a 32-year-old counterprotester dead.

This false vision of history is a direct result of America’s dishonesty with itself on matters of race. Just as the Confederate cause was rewritten as a story of heroism, patriotism and reunion, and amnesia now defines our relationship with Americans’ opposition to black civil rights during the 20th century, we can safely surmise that similar myths of unity could color how we remember the NFL protests.

Such has been our history. And there’s little to suggest the cause that Kaepernick knelt for will be remembered any differently. But our failure to reckon with America’s racism will still haunt us. And genuine equality will continue to be deferred as a result.