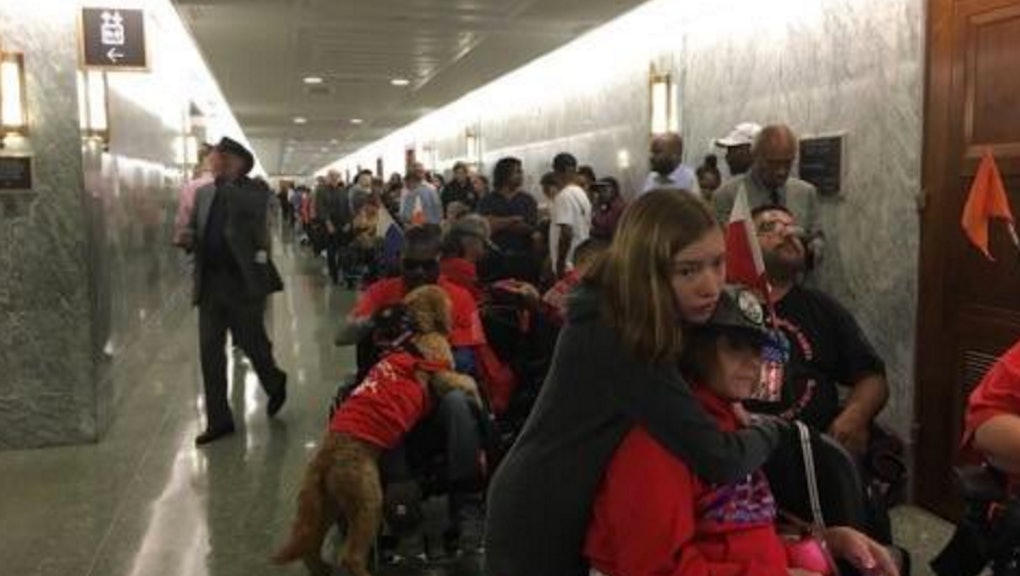 With hours to go before a Monday Senate hearing on Republicans’ Graham-Cassidy health care bill, hundreds of protesters affiliated with a wide range of activist groups lined up in the halls of the Dirksen Senate Office Building to show the GOP they will not stand for a proposal that may kick millions off their health insurance.

At press time, the line of protesters forming outside the room where deliberations are scheduled to take place stretched across two separate Senate buildings.

Protest organizers told Mic that at least 200 protesters — 80 of whom were using wheelchairs — showed up in the early hours of the morning to admonish Senate Republicans for their fifth attempt to repeal the Affordable Care Act with a bill that one estimate warned may kick more Americans off their health insurance than the so-called “skinny repeal,” which the Congressional Budget Office said would lead to 32 million people losing their insurance.

Among the groups organizing the day’s events were major activist networks like ADAPT, Indivisible and MoveOn.

Lopeti Penimaani, a member of ADAPT for the past 34 years, said he has been to at least 25 protests to support disability rights. Sitting in his wheelchair in the line outside the Senate hearing, the Utah resident said the Graham-Cassidy proposal would lead to people with disabilities losing their independence — echoing concerns from the Center on Budget and Policy Priorities, a liberal-leaning thinktank which conducted the most extensive analysis so far of how the bill affects those currently insured.

Penimaani has a degenerative neurological disease that makes it difficult for him to walk. He also suffers from seizures. His equipment and treatment is largely paid for by Medicaid, he said.

Bruce Darling, a community organizer with ADAPT, said in a phone interview that the Graham-Cassidy health care bill was “insidious.”

When Sen. Lindsey Graham of South Carolina, one of the bill’s cosponsors, arrived for the hearing, protesters chanted “shame!” at him.

As other senators entered the room for the hearing, protesters chanted “save our liberty!” and “no cuts to Medicaid!”

Law enforcement began to remove protesters — including some in wheelchairs — from the room shortly after 2 p.m. local time.

As a result of protesters’ disruption, Sen. Orrin Hatch of Utah said that the hearing would go into a temporary recess until the room came to order.

Asya Pikovsky, a spokesperson for Popular Democracy, said there were over 100 arrests. Mic has reached out to law enforcement to corroborate the number.

With just days to go before the Sept. 30 deadline, Senate Republicans’ chances of passing their fourth attempt at health care reform look grimmer and grimmer by the day.

Assuming all Democrats will vote against Graham-Cassidy, the bill needs only three Republican votes against it to fail. Republican Sens. John McCain of Arizona, Rand Paul of Kentucky and Ted Cruz of Texas have all stated that they are against the bill. Sen. Collins said she was strongly leaning towards voting against the bill. Sen. Murkowski of Alaska, who joined McCain and Collins in killing the skinny repeal effort, is currently undecided. According to Ted Cruz, Sen. Mike Lee of Utah is also against the bill.

Though Graham and Sen. Bill Cassidy of Louisiana, the other author of the bill, revised it in an apparent effort to appeal to its holdouts, it is unclear whether their gambit will be enough to garner their support.

A Senate hearing on the Graham-Cassidy bill is slated to take place on Monday afternoon.