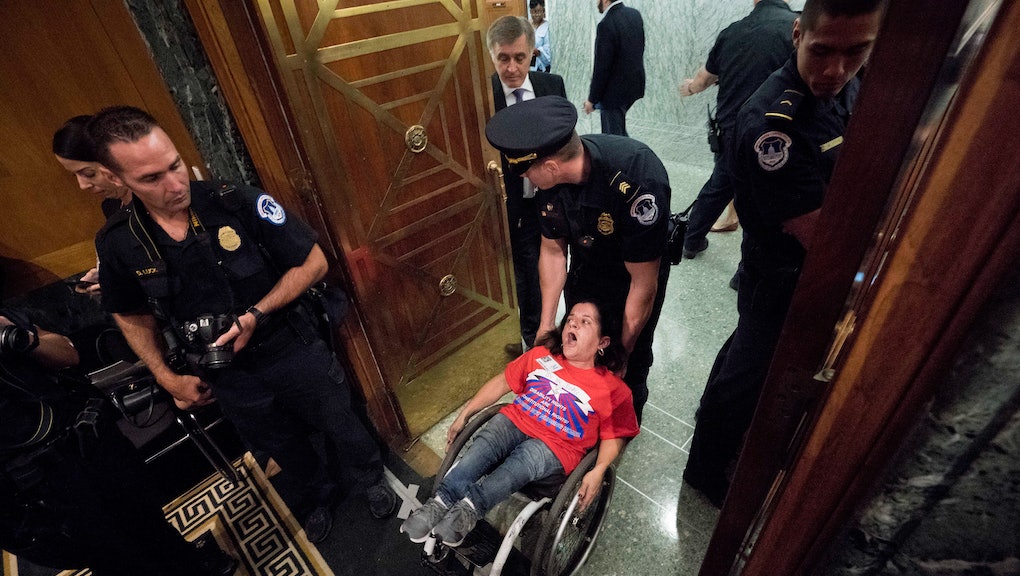 Police: 181 protesters arrested at Senate in day of action against Graham-Cassidy

As Senate Republicans attempted to convene a Monday hearing on the Graham-Cassidy health care bill, irate protesters — including some in wheelchairs — shouted them down, preventing Republican Sen. Orrin Hatch of Utah from beginning the hearing as scheduled.

When the disruption appeared to have reached a fever pitch, law enforcement began to remove the protesters from the room.

Cameras continued to roll as United States Capitol Police lifted one man from his wheelchair and dragged him out of the room.

Outside the room, police attempted to disperse a crowd of protesters who were denied entry to the the hearing on Graham-Cassidy.

A reporter for HuffPost pointed out that Sen. Bill Cassidy of Louisiana, one of the health care bill’s cosponsors, appeared to be unfazed by the pandemonium in the room — at one point, he even seemed to yawn as the protesters were removed.

According to a statement from USCP, 181 protesters were arrested at the Senate. Asya Pikovsky, a spokesperson for Popular Democracy, previously gave Mic a lower figure for the number of those arrested protesting Graham-Cassidy.

The scene on Monday bore a striking similarity to the health care protests in June and July, which saw activists associated with ADAPT, a grassroots watchdog organization for the rights of the elderly and people with disabilities, storm the Senate to demand Republicans not pass any of their efforts to repeal and replace the Affordable Care Act. These efforts, they argued, would disproportionately affect people with disabilities.

Bruce Darling, an organizer with ADAPT, called the bill “insidious.”

Their argument is not without merit: Estimates of all Republican health care bills so far have warned that millions would lose their coverage. The Center on Budget and Policy Priorities, a liberal-leaning think tank, warned that Graham-Cassidy would “[convert] Medicaid’s current federal-state financial partnership to a per capita cap, which would cap and cut federal Medicaid per-beneficiary funding for seniors, people with disabilities and families with children.”

On Monday evening, Sen. Susan Collins announced that she did not support Graham-Cassidy, effectively killing the health care bill.

— Will Drabold contributed to this report.