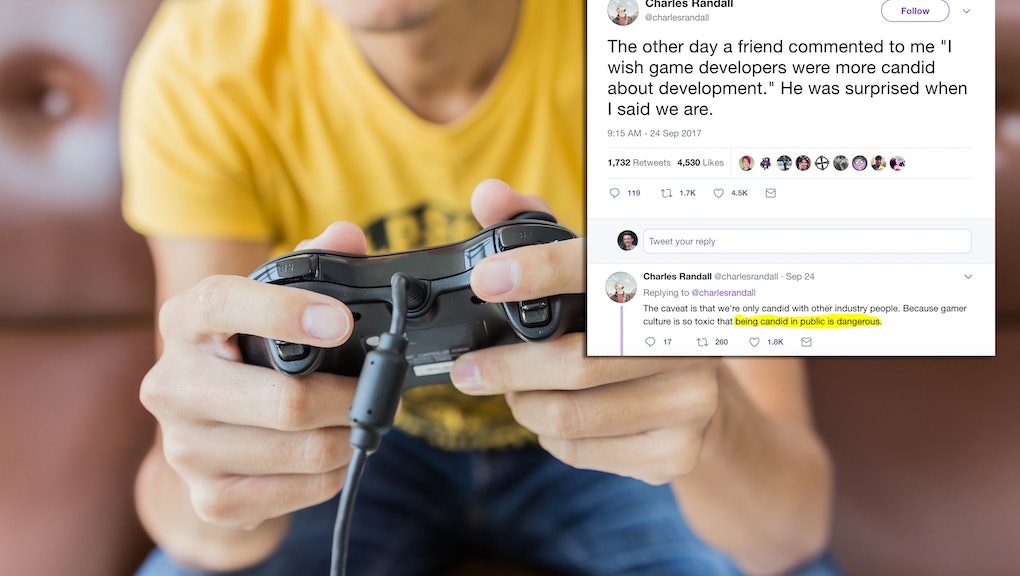 Why is video game development so secretive? Online harassment, one developer says.

The world of video game development is notoriously opaque. To make a big-budget video game, hundreds of people hide away for several years, spending millions of dollars. Usually, the only thing customers see is the finished project on store shelves. If they’re lucky, fans might be able to buy a book of concept art, but the nitty-gritty of what actually goes into game development is often shrouded in mystery.

Why? One game developer gave his reasoning in a Twitter thread on Sunday: In most cases, when individuals try to be open about the realities of creating a video game — especially in the last few years — they open themselves up to threats and online harassment.

Charles Randall, a programmer who has worked for Ubisoft on titles like Assassin’s Creed 2, tweeted a long thread about his experiences in game development and the dangers of speaking publicly about it in the current culture of gaming. He cited outrage-based YouTubers and toxic online forums as major sources of the problem.

It’s a lengthy thread and worth reading in its entirety. Essentially, Randall explains that most game developers — including him — love talking about their work. However, when they do so, casual fans who purport to know a lot about game development tend to rush in and tell them how wrong they are, how game developers are greedy, etc.

Or worse. It’s not hard to find examples of toxicity toward game developers, especially abuse that suggests a misunderstanding of their work. The extended harassment campaign known as Gamergate began with the public smearing of Zoe Quinn, an indie game developer who was falsely and repeatedly accused of trading sex for free publicity.

Gamergate began with the public smearing of an indie game developer who was falsely accused of trading sex for free publicity.

That was in 2014, though the problems go back even further. The trolls have never really let up.

For example, after Mass Effect: Andromeda came out in March, angry netizens blamed its rough animation on one woman, despite the fact that it was a game in development for several years under the care of several hundred people. Even before the game was released, the Gamergate-affiliated subreddit /r/KotakuInAction targeted Manveer Heir, an ex-BioWare developer, over his outspoken thoughts on racism.

Similarly, Gamergate sympathizers like to set their sights on Tim Schafer, the head of Double Fine Productions, for what they perceive to be an insidious misuse of money surrounding his studio’s crowdfunded game, Broken Age. In short, both acts of the game ended up costing much more than originally estimated, a sign to some that Schafer somehow swindled loyal fans out of their hard-earned cash. (Double Fine released an entire documentary about the game’s development process.)

Harassment in the gaming world is a demonstrably large problem, and anyone who dares speak up about it usually exposes themselves to abuse. Of course, this is a bit of a chicken-and-egg situation: If the process of game development were more transparent to begin with, perhaps there would be less misinformation online masquerading as fact in the first place.

But, if anything’s become clear, it’s that some people would rather find one person to blame than accept the reality: Game development is damn expensive and hard as heck.

The other day a friend commented to me, “I wish game developers were more candid about development.” He was surprised when I said we are. The caveat is that we’re only candid with other industry people. Because gamer culture is so toxic that being candid in public is dangerous.