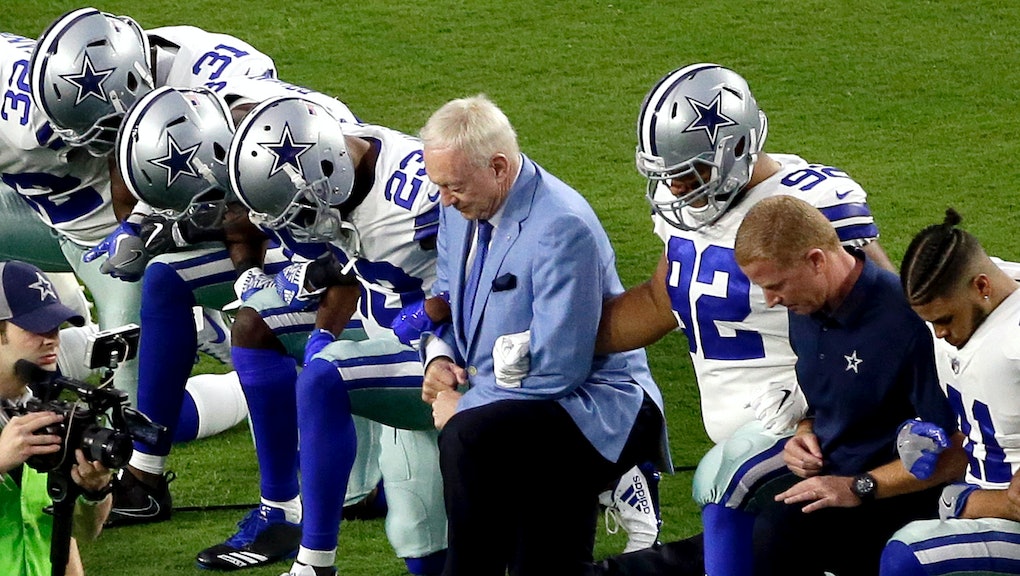 The NFL protests were never about unity. That’s actually a good thing.

NBA star LeBron James attended a press conference in Cleveland on Monday where he expanded on critical comments he’d previously made about President Donald Trump. The 32-year-old called Trump a “bum” on Twitter two days before, after the president rescinded a White House invitation to the Golden State Warriors’ Stephen Curry — who had already said he wasn’t going.

Trump has spent several days attacking professional football players in speeches and on social media, arguing at a rally in Huntsville, Alabama, on Friday that those who refuse to stand during the national anthem before games should be fired. Hundreds of NFL players, coaches and owners responded over the weekend by kneeling, standing with their arms interlocked or remaining in the locker room during the song in a statement of solidarity.

“Anyone who had association with the NFL yesterday was unbelievable,” James said Monday, praising the actions of the fans as well. “There was no divide ... [The] thing that kind of frustrated me and pissed me off a little bit is that fact that [Trump] used the sports platform to try and divide us. I’m not going to let ... one individual, no matter the power, no matter the impact that he should have or she should have, ever use sport as a platform to divide us.”

It’s unclear if James was intentionally ignoring the booing spectators, vitriolic Twitter users and indignant conservative political figures denouncing the protesters as un-American ingrates in his descriptor. But he was expressing a widely held sentiment: The NFL demonstrations were an example of the league coming together to oppose Trump’s efforts to “divide” people. Taken broadly, James’ version of events can be reduced to a clash between the divisive president and a unified front that included anyone affiliated with the NFL.

This sentiment bears a more critical look. Because even by the protests’ own internal standards, divisions were visible everywhere, independent of Trump. And even if unity was in short supply, that’s actually a good thing in the context of a racial justice protest.

A brief glance at how NFL affiliates addressed the demonstrations over the weekend reveals marked differences in approach. The protests that Colin Kaepernick launched in August 2016 were explicitly about racism and the rampant killings of black people by police. He demonstrated this by kneeling during “The Star Spangled Banner,” saying he refused to “stand up to show pride in a flag for a country that oppresses black people and people of color.”

Yet plenty of his sympathizers have declined to mirror this stance. Presumably because they wanted to express their tepid support for Kaepernick without openly shunning the American flag and anthem, several players stood during the song with their arms interlocked instead of kneeling. The Pittsburgh Steelers on Sunday opted to stand during the anthem, but in the locker room rather than on the field. (The lone exception was Alejandro Villanueva, who mistakenly stood for the anthem in full view of the crowd.) The Dallas Cowboys further confused matters Monday by kneeling as a team before the anthem started, then rising and locking arms during the song itself.

NFL fans were equally far from unified in their response. New England Patriots supporters rained boos on their team at Gillette Stadium as several players took a knee during the anthem Sunday. As for the general population, a Reuters/Ipsos poll published in September 2016 found that 61% of Americans disagreed with Kaepernick’s protest, while 72% thought it was “unpatriotic.” Sixty-four percent still supported his right to demonstrate.

All told, the parties involved over the weekend seemed to be making their voices heard on a wide and often disparate range of causes — an end to racist police violence, support for their teammates, Kaepernick’s right to freedom of expression and opposition to Trump, to name a few.

This is not unity. But it does accurately reflect the divisions in the U.S. debate around racism. Such divisions are almost always framed as a negative in American political discussion. Accusations of being “divisive” have marked elections since at least the Obama era, and grew especially pronounced in the 2016 clash between Trump and former Secretary of State Hillary Clinton. The implication is that Americans are inherently united by shared goals and values. A divisive figure is someone who seeks to highlight our differences to derail us from a common destiny.

This is one of our more insidious national myths. It not only perpetuates the falsehood that we all basically want the same thing — we do not — it often turns efforts to talk about inequality into arguments over whether pointing out differences is itself the problem. The result is an environment where even mentioning racial inequality provokes vitriol and avoidance. And the resulting refusal to talk openly and honestly about racism makes the inequality that stems from it that much harder to address.

More tellingly, this refusal also highlights a lack of willpower to confront said inequality. If outraged NFL fans and right-wing politicians were as fired up about racism as they are about football players kneeling during the national anthem, one can imagine how much more serious American efforts to combat racism might be. What we’re left with, instead, is a series of lines drawn in the sand. Interspersed between them are people who are committed to ending racism; people who sympathize but are tentative about taking a public and controversial stance on the issue; and those who are openly antagonistic to it — the Donald Trumps, the Newt Gingriches, the angry NFL fans.

These lines are valuable. The battle for racial equality is only a battle because there are opposing sides. To insist on the perception of national unity when so many are openly against black rights is to reject the importance of making enemies in the name of a worthwhile pursuit. Equality-minded Americans would be remiss to presume common cause with racists simply because we all share a nationality.

The NFL protests are not an example of unity, but the divides they’ve laid bare mark a step toward making us a more honest and moral country.