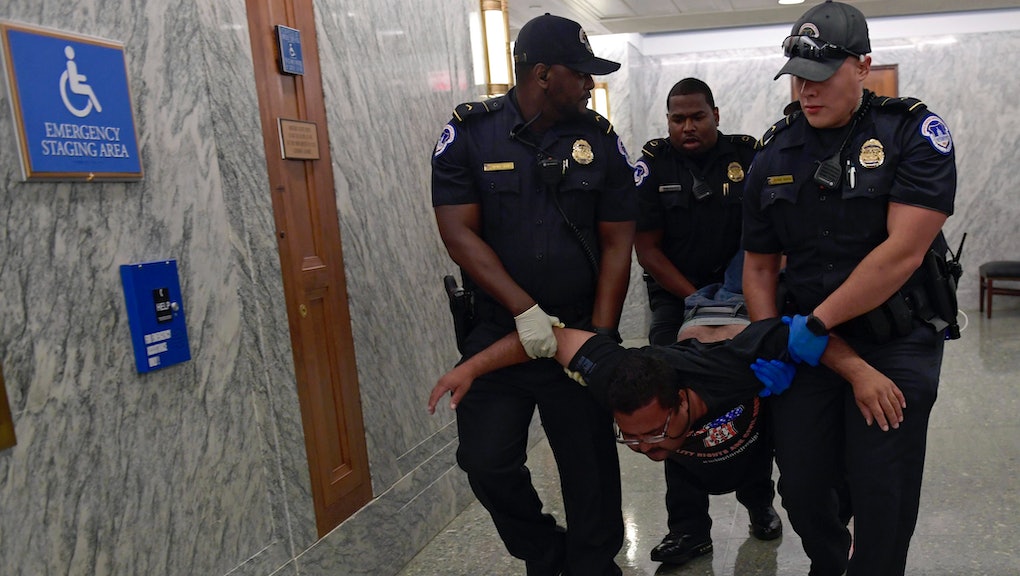 “We have this spirit in us to stand up for ourselves:” The scene at the Graham-Cassidy protests

Every day, we bring you a different dispatch on Trump’s America. Today’s focus: screams in the hallways.

Lopeti Penimaani was outside the Dirksen Senate Office Building at 6 a.m. Monday. Penimaani, who flew in over the weekend from Utah, was determined to be on the ground to participate in Adapt’s last push to kill Republican health care reform efforts.

Penimaani, 57, said he has been to about two dozen protests over the year to pressure lawmakers to preserve or enhance rights for Americans with disabilities. With a degenerative neurological disease, Penimaani can only take a few steps without the assistance of a wheelchair.

With cuts to Medicaid, he said, people with disabilities would lose the funds to pay for care in their homes — forcing them to be institutionalized. “It allows us to live like any other American,” Penimaani said. “We have this spirit in us to stand up for ourselves.”

No one would doubt the spirit of Adapt protesters and other demonstrators after 181 of them were arrested Monday outside the Graham-Cassidy hearing. Adapt, a disability rights group, had 200 protesters assembled by 9 a.m. Hundreds more trickled in before the hearing began at 2 p.m.

Mass chaos ensued. In a hallway about four paces wide, protesters in wheelchairs locked themselves in place and were carried out of their devices by police officers. Chants of “No cuts to Medicaid” and “Health care is a human right” filled the halls. Screams of protesters saying Medicaid cuts would kill them echoed outside the hearing. Other demonstrators were handcuffed and dragged along the shiny stone floor frequently traveled by U.S. senators.

Sens. Lindsey Graham (R-S.C.) and Bill Cassidy (R-La.) faced chants of “shame” as they walked in and out of the hearing, which lasted well into the evening after Sen. Susan Collins (R-Maine) became the third Republican to oppose the bill, effectively killing the legislation.

As the chants heated up in advance of the 2 p.m. hearing, Danielle Campoamor supervised her son Matthias using crayons to mark up a large, printed version of Graham-Cassidy’s first page. Earlier in the day, Sen. Kirsten Gillibrand (D-N.Y.) helped Matthias and other children write “horrible” on the bill.

Campoamor, 30, traveled from Brooklyn, New York, to protest the bill’s total funding cut to Planned Parenthood. She said the organization provided birth control when she was 15, counseled her after a sexual assault, performed an abortion at 23 and helped to prepare her for Matthias’ birth at 27.

“I’m a mother because of Planned Parenthood,” Campoamor said. “I wouldn’t have my family without them.”

Hours after protesters had been removed, Cassidy ducked out of the hearing room to head to the Senate floor. As a door opened to reveal him, he looked both ways in the hallway for protesters and smiled at the police officer guarding the door.

Protesters pursued Cassidy as he fast-walked toward a bank of senator-only elevators. Sen. Dean Heller (R-Nev.) had emerged earlier and told activists the bill did not cut Medicaid.

I asked Cassidy four times whether his bill cuts Medicaid. He would not respond.

View videos and photos from yesterday’s protests on my Twitter feed.

Today’s question: What role do you believe on-the-ground activism played in Graham-Cassidy’s now-likely defeat? Email us at trumpsamerica@mic.com.

Sens. Collins, Rand Paul (R-Ky.) and John McCain (R-Ariz.) have announced opposition to Graham-Cassidy, leaving Republicans one vote short of what they need to pass the health care legislation. A vote on the bill was expected Wednesday; it remains to be seen if Sen. Mitch McConnell (R-Ky.) will hold another health care vote he may lose.

Republicans are already plotting their next move to work on repealing the Affordable Care Act after the Sept. 30 deadline to pass legislation with 50 votes in the Senate.

NASCAR is threatening to fire drivers who participate in protests during the national anthem, but they’ll continue to let race viewers fly the Confederate flag.

Roger Stone promised he would debunk claims of Russian collusion during testimony before the House Intelligence Committee on Tuesday.

With the support of House Minority Leader Nancy Pelosi, Democrats introduced a discharge petition to force a vote on the Dream Act.

The Washington Post explored how Trump’s usual inclination to rev up division could be hurting him with voters.

Trump kept up his criticism of the NFL with a tweet on Tuesday morning about booing at a Dallas Cowboys game.

Mic spoke with Muslim-American children about the Islamophobia they face each day. Tap or click below to watch the video.