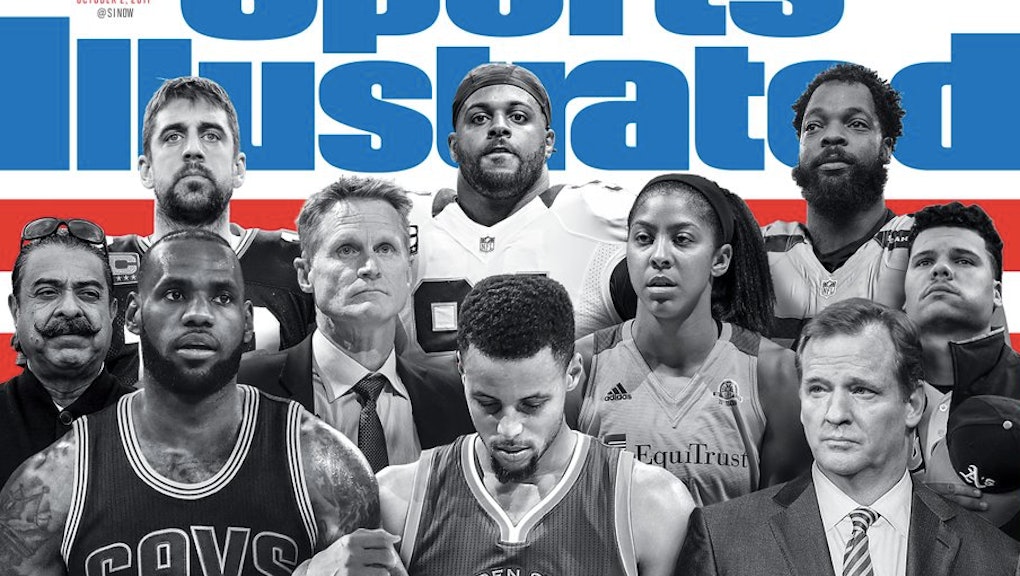 President Donald Trump managed to insert himself into the professional sports world not once, but twice over the weekend. His verbal attacks on both professional football players who kneel for the National Anthem, as well as basketball star Steph Curry, who said he didn’t want to visit the White House after winning the NBA title (a tradition for most championship teams in the major American sports leagues), generated headlines in both political and sports media outlets.

But the venerable sports magazine Sports Illustrated is now taking heat for its latest cover that references the powerful show of solidarity among athletes against Trump, but fails to acknowledge the most visible athlete at the center of the sporting world’s resistance: Colin Kaepernick.

The cover photoshopped players from the professional sports world, including people from NFL, the NBA, the WNBA and the MLB, as well as the owner of the Jacksonville Jaguars and the head coach of the Golden State Warriors, whose team was brought into the fray after Curry’s comments (Curry is is also featured on the cover).

But also included on the cover, to the right of Curry, is Roger Goodell, the controversial commissioner of the NFL.

Goodell’s inclusion on the cover been met with anger and disappointment by fans. According to the magazine’s critics, Goodell has been one of the figures most instrumental in keeping Kaepernick — whose decision to take a knee as a way to protest police brutality has been met with outrage by conservatives — unemployed now that he is a free agent.

Sports Illustrated did not respond to requests for comment about the decision to include Goodell on the front page and exclude Kaepernick.

Kaepernick’s exclusion from the cover also felt like a punch to the gut for the people who support Kaepernick’s actions, and feel that the NFL — and, now, Sports Illustrated — have moved to strip the take-a-knee protests of their original meaning and morph them into a more generic signal of “unity” among players, coaches and management.

The worst irony here may be the way the NFL’s new marketing initiative not only appropriates the protests, but perverts their meaning. Kaepernick’s protest and the ones that followed were divisive, and were meant to be: That was the point, to ask people to choose sides, and to direct their attention to what’s going on in the real world beyond sports. Goodell and the owners, in asking everyone to come together around the cause of the NFL itself, have done what they always do, and made what they’ve touched cheaper and smaller.

“It’s obvious Kaepernick is being frozen out for his political opinions, but it’s less apparent how extraordinary it is that a player like him can’t find a team,” 538 wrote last month when explaining how “unheard of” it is that Kaepernick is not playing in the league despite his skill as a player.

Several other professional athletes have joined Kaepernick in his silent protest against police brutality — many of them started taking a knee before it was coopted as a symbol of unity among the league.