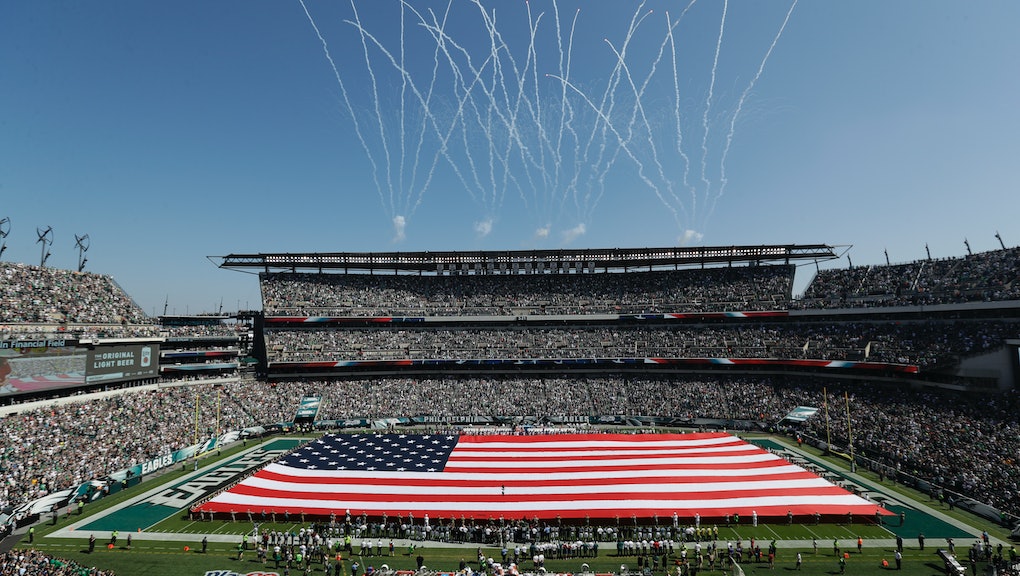 Sportscaster Bob Costas criticized President Donald Trump Monday for engaging in empty “flag-waving” with his attacks on NFL players who protest racism during the national anthem, telling CNN that patriotism isn’t solely the property of the military.

“Patriotism comes in many forms and what has happened is it’s been conflated with a bumper-sticker kind of flag-waving and with the military only so that people cannot see that, in his own way, Colin Kaepernick, however imperfectly, is doing a patriotic thing,” Costas said. “And so too are some of these other players.”

It was a rebuke both to Trump’s weekend tirade against “son of a bitch” athletes who have knelt during the national anthem — and to the way the White House and others have sought to justify the president’s criticisms by suggesting the pregame protests are an affront to the United States military.

Further, Costas’ remarks call attention to a specific strain of “military only” patriotism that has been part of the culture long before Trump took office — and that has been especially prevalent within the idiom of professional football.

From the very beginning, the tradition of playing the anthem before sporting events was tied to the military.

While the “Star-Spangled Banner” had been played before some baseball games earlier — most notably in the 1918 World Series, during World War I — it became a regular occurrence in Major League Baseball and the National Football League in 1942, when the U.S. was embroiled in World War II.

The tradition continued after the war, with NFL commissioner Elmer Layden saying in 1945 that the “anthem should be as much a part of every game as the kickoff.”

“We must not drop it simply because the war is over,” Layden said at the time. “We should never forget what it stands for.”

While the pregame anthem has never been just a football tradition, the sport’s patriotic expressions have always seemed to take on a particularly military flavor — something the late comedian George Carlin poked fun at in legendary bit on the differences between football and baseball.

“In football, the object is for the quarterback, also known as the field general, to be on target with his aerial assault, riddling the defense by hitting his receivers with deadly accuracy in spite of the blitz, even if he has to use shotgun,” Carlin observed. “With short bullet passes and long bombs, he marches his troops into enemy territory, balancing this aerial assault with a sustained ground attack that punches holes in the forward wall of the enemy’s defensive line.”

But as Michael Oriard pointed out in a 2009 Slate article, the relationship between football and the military has been a two-way street. Just as football, with its bombs and blitzes, routinely traffics in the language of war, the military has incorporated football into its lingo, as well, in instances like World War II’s Operation Goalpost and Vietnam’s Operation Linebacker.

As the years went on, the military-infused patriotism of the NFL grew more and more pronounced. “We’ve become the winter version of the Fourth of July celebration,” then-NFL commissioner Paul Tagliabue told reporters ahead of the Super Bowl in January 1991 — the month the U.S. launched Operation Desert Storm.

That particular kind of patriotism has not been without criticism.

Meeting with reporters ahead of the 1991 Super Bowl, Tabliabue was forced to address concerns that the NFL was attempting to use the U.S. military activity in the Middle East to monetize patriotism, saying that the league was using its “best judgment” and hoped that “football will continue to be our focus, not politics.”

But former NFL commissioner Pete Rozelle told the New York Times that year that “it was a conscious effort on our part to bring the element of patriotism into the Super Bowl” — something George Young, then-general manager of the New York Giants, who’d defeat the Buffalo Bills that year in a one-point battle, suggested had helped them in selling their “product...football.”

Concerns about “paid patriotism” escalated in 2015, when Arizona Sens. John McCain and Jeff Flake — both Republicans — issued a report that found the Department of Defense had given nearly $7 million of taxpayer funds to professional teams, particularly in the NFL, for patriotic overtures honoring troops, which Flake said “cheapens” the displays.

“What we take issue with is the average fan thinking teams are doing this on behalf of the military,” Flake said.

Still, those patriotic displays have remained a significant part of the rituals in the NFL — perhaps understandably. Military service has consistently been regarded by most Americans as one of the strongest expressions of patriotism, and the military’s necessity in preserving the country’s values has long been codified in idioms like “freedom is not free.”

“Many ways to be patriotic and honor the flag”

But Peter Dreier, the E.P. Clapp distinguished professor of politics at Occidental College, cautioned against regarding patriotism solely through the lens of the military. “There are many ways to be patriotic and honor the flag,” he said, and they don’t all involve the armed forces.

“There is a definite link between pro sports run by big corporations and conservative owners and embracing American militarism and embracing right-wing patriotism,” Dreier told Mic in a phone interview Tuesday. “It’s not just a sign of patriotism. It’s a corporate commercial for defense contractors.”

According to Dreier, who is working on a book about progressive figures in baseball and has written about the political history of patriotic symbols, Trump is seeking to silence players and promote a view of patriotism that accepts America whether it is “right or wrong” rather than one that seeks to “improve it.” By defying Trump, he said, players were acting within a long lineage of progressive demonstration — and setting the stage for further political activism in sports.

“It’s incredible to see football players doing this,” Dreier said. “This is the biggest mass defiance of professional athletes in history.”

Trump and his allies have continued to go after the NFL this week, however, framing the issue as one not about race, but about honoring the flag and those who defend it — even though the protests have explicitly been about racial injustice, not about the anthem or the military.

Costas took issue with that “narrow” line of patriotism Monday in his comments to CNN, noting that other types of patriots — teachers, social workers, dissidents — are not honored at sporting events the way military personnel are.

“Part of what’s happened is that sports and patriotism and the flag have been conflated to such an extent that people can’t separate out any nuance,” Costas said. “It’s in sports where this stuff happens — sometimes movingly, sometimes I’d submit cynically, because wrapping yourself in the flag and honoring the military is something which nobody is going to object to.”

“We all respect their sacrifice; we all honor their sacrifice,” Costas continued. “Yet what it has come to mean is that the flag is primarily and only about the military.”