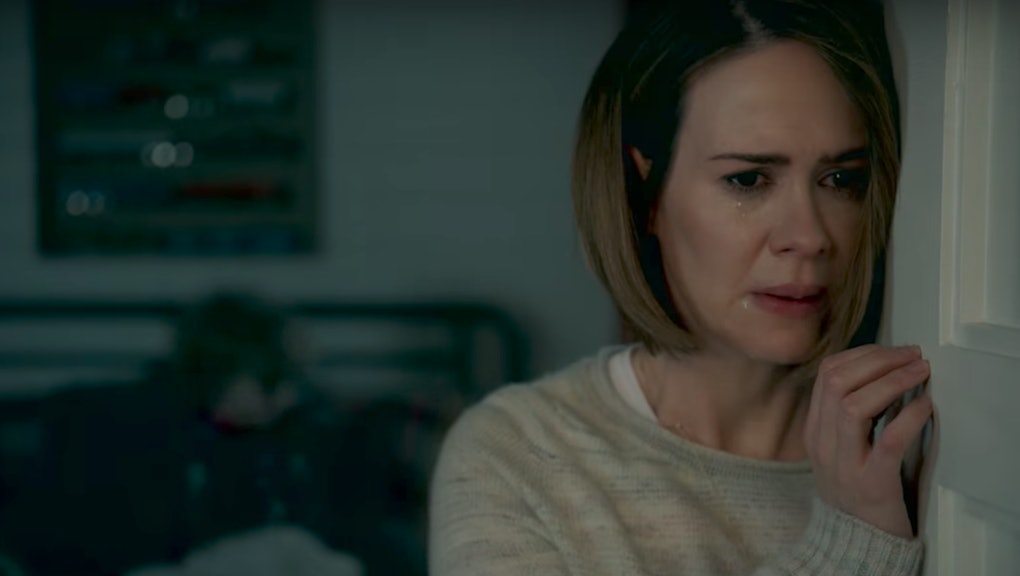 If there’s a takeaway from the current season of American Horror Story, it’s that most of us have the capacity to be monsters. At least, we do if we’re feeling cornered, helpless and getting whispered to by a slick opportunist like Kai Anderson, the season’s glorified cult leader played by Evan Peters.

That can be a difficult idea to confront, especially when you consider creator Ryan Murphy’s intent for season seven: to use 2016’s election night as the jumping-off point to explore the concept of the cult of personality, and how a single person can wield power over many, even if the followers know better.

This grim interpretation of real events is a drastic leap for a show previously rooted in the supernatural. Where past seasons delivered demons, spirits, vampires, witches and whatever the hell Freak Show was about, Cult has rooted itself in something much scarier than the occult: the dark side of human nature. Specifically, it’s focused on a small town in Michigan, and is exploring the stories of a collection of misunderstood, frustrated, marginalized and unhappy people who we learn have turned to Anderson because he — unlike most — takes time to acknowledge and listen to them.

In response to their frustrations, he suggests the use of extremism (murder, mutilation) to get what they want, and to free themselves from social norms as a result. In Tuesday’s episode, Anderson masterminds the deaths of two people and implores a man to saw his own arm off as he stands watching. And while it was a flashback episode largely anchored in Nov. 9 (the rest of the series spans the months following the election), it served to give us some backstory: namely, how Kai Anderson begins recruiting his followers, and how he’s likely influenced the arc of every character we’ve met up until that point.

As extreme as the Ryan Murphyverse can be — and Cult is no different from its predecessors in that regard — the idea of someone basically exerting mind control over others isn’t necessarily far-fetched. We know about killers like Jim Jones and killers-by-proxy like Charles Manson, who used their persuasion skills to incite bloodshed. And by using a figure like Anderson — a straight, white, cis man who’s as intelligent as he is cunning and manipulative — Cult is showing us how easy it is to be swept up in a belief system when you’re desperate.

Men like Anderson, brandishing their MAGA hats and spitting venom in 140-character increments, exist in our world.

Even more unsettling, we’re seeing what people are capable of when they’ve invested in something that turns out to be much bigger than themselves. In Tuesday’s episode, Anderson helped Harrison (Billy Eichner) murder his homophobic boss; in the previous installment, we saw Harrison telling Anderson his secrets as a means of surrendering all control to him.

The cult of personality thread would be frightening as a standalone plot. But by using Anderson as an analogue for an “alt-right” leader — he’s running for office, and is tapping into white identity politics to appeal to his base — Cult is creating a sense of paranoia, both for the characters in the series and, frankly, for this viewer. Because Anderson isn’t an anomaly: Men like him, brandishing their MAGA hats and spitting venom in 140-character increments, exist in our world and are confident enough to march in Charlottesville, Virginia and commit hate crimes. They’re confident enough to carry tiki torches and justify the need for Confederate statues.

What many have come to realize is that people like this are everywhere and have found power in a leader who refers to white supremacists as “very fine people” while condemning NFL players who invoke their right to peaceful protest. They are IRL versions of Anderson, radicalized through rhetoric that’s always existed, but that found a megaphone throughout 2016.

And in the show’s world, Anderson is swaying people to his side who, up until that point, had no plans to hurt anyone else or incite panic. Harrison knows he shouldn’t kill his boss, just like Beverly Hope (Adina Porter) knows the murder of her professional adversary (Emma Roberts) at the hands of Anderson isn’t the answer to her rage. But out of desperation, they turn to him, taken in by his promises, his confidence and his self-assurance. Watching it makes you second-guess yourself: Obviously, you would know to stay away from a person like Anderson — but, also, could you? What if he was telling you something you’ve been waiting for someone to say? What if he made you feel truly understood and seen for the first time?

“Anything’s possible,” Anderson says to Beverly over coffee at one point, convincing her he can parlay a seat on city council to world domination. And the scary thing is, he’s right. Had Cult somehow taken a more straightforward approach to the 2016 election — analyzing what happened, but maybe with a bunch of creepy clowns thrown in for good measure — it would’ve been a weak and obvious approach to sensationalizing events we’re still really trying to figure out as a culture. But by taking a look at cults — the personalities at the center of them and the people who follow — the show has created a unique form of terror.