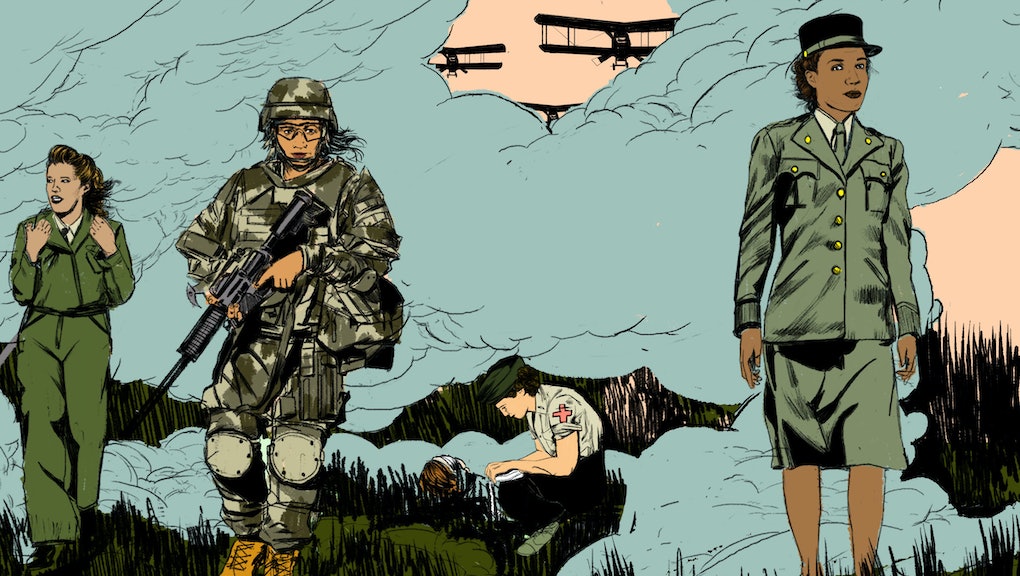 History serves as a testament that, despite being barred from enlisting and being marginalized in the line of duty, women have continued to fight for their rights to serve their country.

A century has passed since women in the United States have been allowed to join the military in an official capacity, though many had served in unofficial roles historically. As far back as the Revolutionary War, they’ve provided much needed support during times of war as civilians and volunteers, some even disguising themselves as men in order to join the line of battle.

It wasn’t until 1948, under the Women’s Armed Services Integration Act, that women were able to serve as full and permanent members with veterans benefits, though some limitations remained. In 2016, they were finally granted the right to serve in frontline combat jobs under every branch of the military. Unfortunately, the last limitation restricting women from serving is still a battleground, since the White House recently issued a reinstatement of the ban on transgender people serving that was repealed last year.

The number of women in service has grown in the last 10 years: As of 2015 they make up 16.8% of the total military force. Still, recognition for non-male service members is scarce, with wider media representation of the armed forces being primarily male. Countless male-only listicles are dedicated to honoring veterans, and essentially every blockbuster war movie features only male protagonists. It’s no wonder common associations for soldiers revolve around G.I. Joe or other male archetypes.

Every single day, there are women — of every color, creed and gender expression — risking their lives to protect and defend our livelihoods. These women are the unheralded heroes who have proudly served and sacrificed for our country.

Before women were allowed to officially serve in the military, Dr. Mary E. Walker was taken captive as a prisoner of war for supporting the Union Army during the Civil War. It was in April 1864, while tending to wounded soldiers as a civilian assistant surgeon, that Walker was imprisoned by Confederate troops for four months before being released in a prisoner exchange.

Walker was a pioneer for women in the medical field. She was the only woman in her class at Syracuse Medical College in 1855 and one of very few female doctors in the country at the time. At the start of the Civil War, the Army wouldn’t allow her to serve as a surgeon, so she volunteered as an assistant surgeon and field surgeon wherever possible.

President Andrew Johnson awarded her the Medal of Honor in 1865, but the medal was later rescinded in 1917 because of her civilian status. Sixty years later, President Jimmy Carter reinstated her honor. Today, Walker is still the only female honoree among the nearly 3,500 recipients.

Hazel Ying Lee was the first Chinese-American woman to pilot aircraft for the U.S. military. After taking her first flight in 1932, she fell in love with flying and earned her pilot’s license later that year. Lee moved to China ahead of the Second Sino-Japanese War and sought opportunities to serve her family’s native country. After the Chinese Air Force rejected Lee based on her gender, she worked as a commercial pilot in China.

Upon returning to America at the start of the Second Sino-Japanese War, Lee became one of only two Asian-American pilots under the Women Airforce Service Pilots program. The program was launched in the wake of World War II, in which female civilian pilots were assigned to noncombat missions within U.S. borders, although they were not considered official members of the military at the time. Because of her prior pilot training, Lee qualified for the Air Transport Command and became one of only 132 women trained to “fly pursuit,” meaning she could captain the faster, more powerful fighters. Lee died in 1944 when her aircraft collided with another on a runway in Great Falls, Montana.

The members of WASP were finally recognized as veterans in 1977, and in 2010 they received a Congressional Gold Medal from then-President Barack Obama.

On Jan. 21, 1991, Lt. Phoebe Jeter became the first female “Scudbuster,” leading an all-male platoon assigned to a Patriot missile control team during the Gulf War. The Patriot is an air defense missile made to combat ballistic missiles like the Scuds. Jeter was the only woman to direct the launch of Patriot missiles and to shoot down an Iraqi Scud missile, destroying at least two during the attack. Had she not acted so quickly to the alert, the Scuds could have landed on the base.

For her bravery and extraordinary performance, Jeter was awarded an Army Commendation Medal while in Saudi Arabia.

Capt. Sage Fox was the first transgender soldier invited to serve openly as a woman. Before, Fox had enlisted in the Army in 1993, served with the Special Forces, was deployed to Haiti and Kuwait, worked for the Army chief of staff and was commissioned as a signal officer in 2009. Upon returning home at the end of 2012, she was listed as an individual ready reserve and began her transition.

In 2013, she received an order to return to the Army to receive medical benefits for a surgery she underwent for injuries sustained during active duty. Fox told her commanding officer she would be returning to service as a woman. He gave her his support, and Fox returned to the Army as a signal officer. Her status was changed to inactive two weeks later without explanation, though, according to the Bay Area Reporter Fox said she felt it was due to the ban on transgender service members in effect at the time.

Though Obama repealed the ban in 2016, the repeal was recently reversed by an executive order from the current administration. Sen. Kirsten Gillibrand and Sen. Susan Collins recently introduced a bipartisan amendment that would restrict the military from rejecting trans people from serving based on their identity. Fox continues to advocate for LGBTQ and veteran causes.

Sgt. Elizabeth Marks is an award-winning para-athlete who joined the U.S. Army at 17. Two years after enlisting, while deployed as a combat medic in Iraq in 2010, she sustained bilateral hip injuries. Multiple surgeries and rounds of physical therapy later, in 2012 Marks began to swim to regain her strength, hoping to be deemed fit for duty.

After two failed attempts, she didn’t give up and was ruled FFD only six months after she took on swimming. At the same time, Marks was accepted into the U.S. Army World Class Athlete Program, where she trains as an athlete while continuing to serve.

Marks’ entrance into competition was marred by respiratory issues that placed her on life support during the 2014 Invictus Games in London. After recovering, she bounced back into training quickly, eventually bringing home a gold medal and setting a world record for the 100-meter breaststroke at the 2016 Paralympics in Rio de Janeiro. That same year, she became the first active-duty soldier to be awarded ESPN’s Pat Tillman Award for Service.