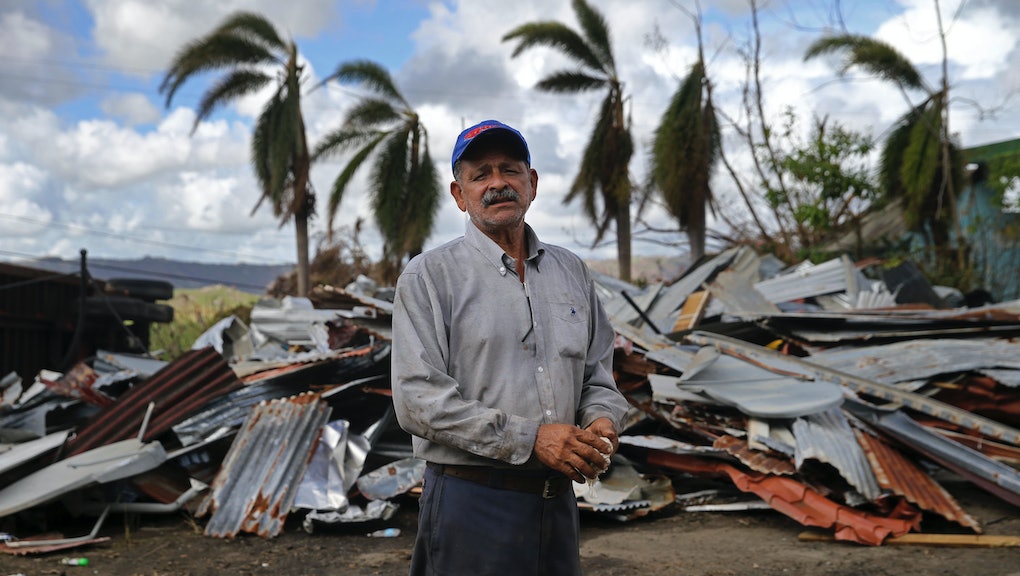 Trump and Puerto Rico: A timeline of the president’s response to the Hurricane Maria devastation

President Donald Trump and the federal government have been criticized for their inefficient response in the wake of the devastation in Puerto Rico from Hurricane Maria.

The president fought back against his critics over the weekend, tweeting that Puerto Rican leaders begging for help “want everything to be done for them” on Saturday. On Sunday, he called his detractors “politically motivated ingrates.”

But it isn’t just the media and some Puerto Rican officials who think the government’s response to the disaster isn’t sufficient: Army Lt. Gen. Jeff Buchanan, who is in charge of coordinating the military’s response to Puerto Rico, said Friday that while more troops and resources were on the way, those currently on the ground were “not enough” to handle the tragedy.

So, has Trump been doing enough? Here’s a timeline of the Trump administration’s ongoing response to Puerto Rico.

Prior to Hurricane Maria making landfall in Puerto Rico Sept. 20, the FEMA timeline shared by Sanders reports that the federal government was making some preparations for the impending disaster. It made an emergency disaster declaration for Puerto Rico and the U.S. Virgin Islands on Sept. 18, and later sent a Type 4 FEMA Search & Rescue Team, canine team and a disaster medical assistance team from the Department of Health & Human Services to the island.

Trump, meanwhile, was issuing his first tweets declaring his support for Puerto Rico, writing on Sept. 19, “Puerto Rico being hit hard by monster hurricane. Be careful, our hearts are with you — will be there to help!”

Trump tweeted his support for Puerto Rico as the hurricane was making landfall on Sept. 20, and on Sept. 21 announced that he would be visiting Puerto Rico in the wake of the hurricane, an appearance that is now scheduled for Oct. 3.

However, after his initial response, it then took the president another five days to again tweet about the hurricane. It wasn’t until Sept. 25 — after the president had spent time on Twitter praising NASCAR, calling for an NFL boycott and inadvertently declaring war on North Korea — that Trump finally addressed the ongoing devastation in Puerto Rico.

In his Monday tweets, the president claimed that “food, water, and medical are ... doing well” — even as reports of the destruction said otherwise — and used the opportunity to mention the decimated territory’s debts to “Wall Street and the banks,” which he said “sadly must be dealt with.”

On Tuesday, Trump addressed criticism that he had been too preoccupied with the NFL protests to focus on Puerto Rico during an appearance in the White House’s Rose Garden, telling reporters, “I’ve heard that before: ‘Was I preoccupied?’ Not at all, not at all. I have plenty of time on my hands. All I do is work.”

“And I appreciated his saying it. And he’s saying it to anybody that will listen,” Trump said.

Trump also took more concrete action on Tuesday, amending a previous disaster declaration for the island, so that it would no longer need to split recovery costs with FEMA but rather have the federal government foot the entire bill.

According to FEMA’s timeline shared by Sanders, during the week following the disaster, the federal government sent over 10,000 federal staff members to Puerto Rico and the U.S. Virgin Islands; began performing search and rescue flights and aerial damage assessments; re-established some power in hospitals and other key areas; and conducted medical evacuations of more than 100 patients to the continental U.S. In addition, the S.S. Wright carried 1.1 million meals and one million liters of water to the affected islands and the Defense Logistics Agency carried 124,000 gallons of diesel fuel to Puerto Rico.

Slightly over a week after the storm made landfall, Trump made the call to temporarily suspend the Jones Act, which put shipping restrictions on Puerto Rico that limited the amount of aid they could receive. The act was suspended on Thursday and the waiver will only last for 10 days.

The president was widely criticized by those in Congress for not waiving the measure earlier, the Hill noted, particularly after immediately issuing similar waivers for Texas and Florida.

On Friday, the Navy hospital ship USNS Comfort set sail for Puerto Rico, after former Sec. of State Hillary Clinton advocated for its deployment on Sept. 24. Clinton’s tweet set off a wave of support for the naval ship to go to Puerto Rico, inspiring a petition that reached over 270,000 signatures.

Trump spent Friday addressing the situation in Puerto Rico during a speech to the National Association of Manufacturers, in which he said the government’s response was made more challenging by the fact that Puerto Rico “is an island surrounded by water. Big water. Ocean water.”

“Ultimately the government of Puerto Rico will have to work with us to determine how this massive rebuilding effort … will be funded and organized, and what we will do with the tremendous amount of existing debt already on the island,” Trump said Friday, as quoted by the Washington Post.

“We will not rest, however, until the people of Puerto Rico are safe,” Trump added. “These are great people. We want them to be safe and sound and secure. And we will be there every day until that happens.”

The president, of course, was also tweeting about the island, praising the government’s response and saying that “big decisions will have to be made as to the cost of its rebuilding!”

Trump’s tweeting about Puerto Rico ramped up on Saturday, as the president sent 18 tweets about the crisis. But while some included the president’s usual praise of the military and government responders, the president also used the opportunity to lash out against his critics — including the Puerto Rican leaders who are currently suffering through the crisis as Trump tweets from his New Jersey golf course.

On Friday, San Juan Mayor Carmen Yulín Cruz blasted the federal government’s response as “inadequate” while begging for more assistance — and Trump fought back, blasting Cruz and other Puerto Rican leaders’ “poor leadership ability” and saying they “want everything to be done for them.”

In response to the president’s comments, Cruz said on Twitter: “The goal is one: saving lives. This is the time to show our ‘true colors.’ We cannot be distracted by anything else.”

The president also used Twitter on Saturday to blast his other perceived opponents, including the “fake news media” and Democrats.

“The fake news networks are working overtime in Puerto Rico, doing their best to take the spirit away from our soldiers and first [responders],” Trump tweeted Saturday. “Shame!”

On Sunday, Trump then doubled down on his comments, calling those who disagreed with him “politically motivated ingrates.”

“Outside of the fake news or politically motivated ingrates,” Trump tweeted, “people are now starting to recognize the great work done that has been done by FEMA and our great military.”