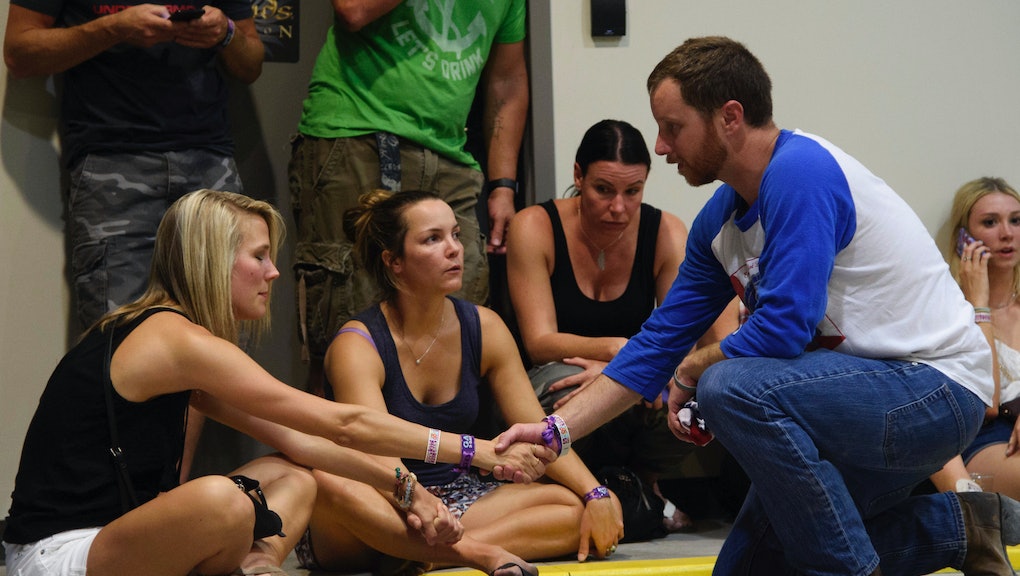 Mass shootings — like Sunday night’s massacre in Las Vegas, which resulted in at least 58 deaths and 500 injuries — have an effect much larger than what can be measured by numbers.

These violent events have a ripple effect, weighing heavily on the mental well-being of an entire network of people, according to Sherry Hamby, research professor of psychology at University of the South and founding editor of the American Psychological Association journal Psychology of Violence.

Hamby stressed this kind of violence affects more than just those who were physically present when the shooting began.

“Even if you weren’t at that concert and you yourself didn’t get shot ... it can have similar psychological effects to being a direct victim,” Hamby added. “Truly, there are far more than the ... victims who have been identified so far.”

“We know from some of the research that was done after 9/11, for example, that the intensity of those symptoms are going to be most intense for the people who were directly victimized and at that concert [in Las Vegas], but it will impact people more or less on a gradient as you spread out,” Hamby said. “Anybody in the broad area of … Las Vegas is probably going to be at heightened risk for experiencing those kinds of post-traumatic stress symptoms.”

“Even if you weren’t at that concert and you yourself didn’t get shot ... it can have similar psychological effects.”

For example, such waves of emotional trauma are still running through the LGBTQ community in the wake of the 2016 shooting at Pulse nightclub in Orlando, Florida, where 29-year-old Omar Mateen killed 49 people.

“[Ramone Rivera] made it out safely, but some of his friends didn’t,” Catherine Welch reported for NPR member station WMFE. “For weeks afterwards, he didn’t leave his house. And for a long time, Rivera couldn’t sleep. When he did, there were nightmares. He still has some trouble sleeping. The shooting at the gay nightclub may have happened six months ago, but the pain still lingers.”

If someone doesn’t choose to seek professional help, Hamby said, there are a number of other ways people impacted by the violence in Las Vegas can find treatment.

“Really, this is the time to come together as a community and to acknowledge your ties to each other,” Hamby said. “I’m sure there are going to be all kinds of memorials and candlelight vigils, and those really have super-important roles to play in terms of healing for individuals as well as for the community.”

According to Hamby, these kinds of memorial events serve not only a symbolic function, but can actually help reinforce the social networks that serve a crucial role in aiding those suffering from stress.

“Reconnecting with the organizations and the values and the people they believe in is a really important part of healing,” Hamby said. “Another important piece of healing is just for people to be able to get into their routines and get back into recommitting to their roles as parents or as teachers or whatever it is that they do out there. So, making sure that you’re trying to stick to those day-to-day schedules as much as possible also helps people heal more quickly from something like this.”

Despite the importance of these types of rituals on one’s mental health, it’s important to note there are still vast gaps in academic research on the effects of gun violence. According to those in the field, that’s primarily a result of actions Congress took under extreme pressure from the National Rifle Association in 1996.

In short, a portion of a 1996 appropriations bill said the Centers for Disease Control and Prevention — the agency whose jurisdiction this research falls under — could not use its funding “to advocate or promote gun control,” a vaguely worded phrase that has since kept the agency from touching any kind of research related to gun violence, according to Smithsonian magazine.

In the wake of the Sandy Hook shooting in 2012, former President Barack Obama finally lifted the CDC’s bans on research related to gun control, but researchers say obtaining funding for gun violence research is still difficult. Furthermore, they say the freeze on this research had a crippling effect on our academic understanding of overall gun violence.

The freeze on research had a crippling effect on our academic understanding of overall gun violence.

“I just think that the relationship between the rate of gun death versus the amount we spend researching that cause of death is unconscionable,” Jonathan Metzl, professor of sociology and psychiatry at the University of Vanderbilt, said in a Skype interview. “Gun violence receives the second-least amount of funding in this country in relation to the amount of injury and death that it causes.

“In a way, this question of how can we stop this problem [of gun violence] is made much more difficult by the real lack of knowledge ... that should be important to everybody,” Metzl added.

Hamby echoed Metzl’s message, saying that instead of committing the appropriate resources to gun violence — the third-leading cause of death for children in the U.S. — researchers are forced to piece things together from other disciplines.

“There are bits and pieces that people will try to shoehorn into other studies, but this should be one of the largest sub-disciplines of violence research,” Hamby said. “Instead, it’s just these piecemeal bits and pieces stuck and tacked on to different types of projects.”