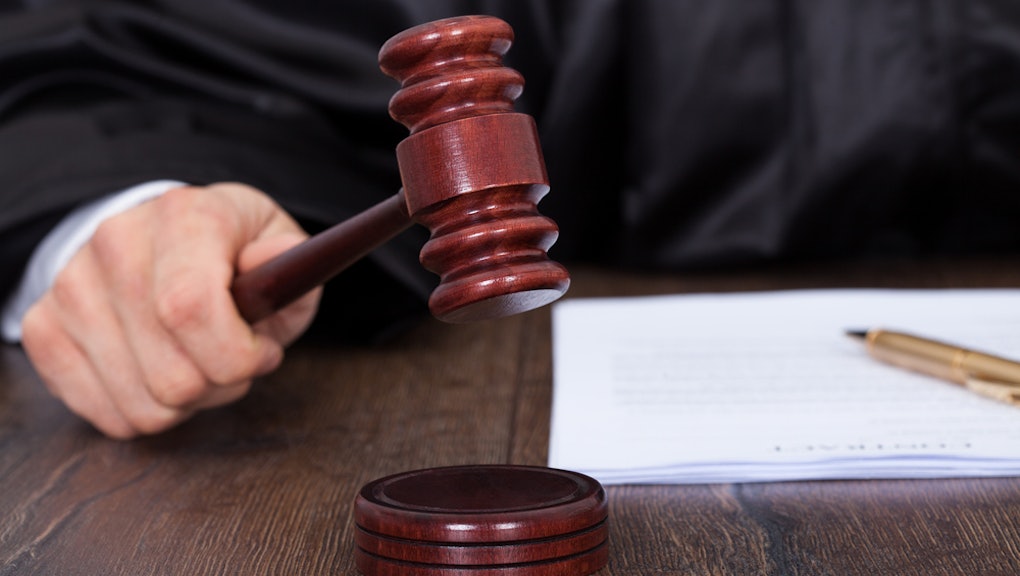 In October 2010, Irene Williams, the owner of a marketing firm in Nashville, Tennessee, walked into small claims court and won a judgment in full against a defendant who failed to pay for her services the previous summer. By Williams’ account, she had completed a long project and, after being faced with every excuse in the book when payment was due, she fought for herself in court.

“I showed in court that day on principle, advocating for myself and in support of all us small biz people,” Williams said in an email interview. “I have never regretted all the time and energy I put into the case; the moral victory, the confidence it brought me — and all I learned along the way — made it worthwhile.”

Williams is just one of thousands of plaintiffs who pursue small claims court cases each year. Small claims courts are supposed to provide an opportunity for individuals to make claims without paying expensive fees. The process can be empowering, especially for those who’d otherwise have no other legal avenues to pursue.

Small claims court is often pursued only after all other avenues for a remedy are attempted. But while these civil cases are supposed to offer easy access to legal remedies when, say, a landlord doesn’t return a security deposit or someone scams you out of cash, going to small claims court isn’t necessarily easy, and there are serious potential downsides, including a significant expenditure of time (about six months is typical from the date of filing) and money — and a very real chance of not getting paid even if you win.

What’s it like to go to small claims court?

Although Williams said she was glad she’d made the effort to stand up for herself in court, she described the process as “inconvenient and ultimately time consuming.” It wasn’t just attending the hearing (located in a county courthouse 45 minutes from her house) that took time, but also preparing the evidence necessary to prevail. “I invested lots of hours organizing my copious email documentation and reading about small claims court so I’d be prepared,” she said.

Wilcox ultimately prevailed, just as Williams did, and was awarded $4,000. But the process was time-consuming and full of hurdles. He ended up going to court twice in order to collect the full amount, and said he learned from the first case how to be better prepared.

“I spent a whole work day making sure I had every document I needed for trial,” he said. “I also spent time before that preparing and trying to work it out over the phone with Uber. I spent a portion of my plane flights memorizing every detail.” Wilcox’s efforts paid off when the court ordered Uber to pay every dime he had demanded.

In a statement to Mic on the Wilcox case, an Uber spokesperson said, “We regret any inconvenience from this particular experience and this matter has been resolved with the rider.”

Is small claims court the right place for your case?

Small claims courts typically only have jurisdiction — or legal authority — to preside over claims where the disputed amount of money is typically $10,000 or less. Other cases that can be brought there include nonpayment of loans; failure to perform work properly (such as not repairing a roof correctly after being paid for repairs), failure to pay for work performed, landlord/tenant disputes like failure to return a security deposit, breach of contract claims (like Williams’ case) and breach of warranty claims.

Divorces, bankruptcy proceedings, name changes and guardianship cases cannot be handled in small claims court, nor can claims against any government agencies or federal employees relating to their actions during employment. If you’re bringing a defamation case or asking for an injunction — which is a court order to stop a particular behavior — you cannot go to small claims court.

Is it ever not worth it to make a case in small claims court?

Just because you can make your case in small claims court doesn’t always mean it makes sense. These could include:

When the cost to bring your case would exceed the amount you’re trying to recoup. For example, if your client lives across the country and cheated you of $100, you’d have to spend hundreds or even thousands of dollars traveling and taking time off work to collect a small amount of money.

When you know the person you’re suing is broke. If your deadbeat roommate cheated you out of $1,000 in rent but you know she’s got $0 in the bank and wouldn’t pay even if the court ordered her to, it’s not worth going to court to get a judgement you actually can’t collect on.

When you don’t think you can prove your case. If you lent your ex $1,000 but wrote the check out to cash and he’s denying the loan ever happened, going to court probably isn’t worth it because it will be your word against his and you’re the one who has to prove he owes.

Is it easy to make a claim in small claims court?

Small claims courts were developed so people with grievances could represent themselves without lawyers in courts with simplified procedures. That doesn’t mean it’s always easy.

To make a case in small claims court, you’ll need to go to court where the incident took place or where the defendant is located. For example, Wilcox lived in Oregon, but since he was robbed in Boston, he had to travel to Boston to pursue his case. Williams had to travel only 45 minutes to the county where the defendant’s business was located to make her claim, and she said she would likely not have done it if she’d had to travel further.

You’ll also have to pay a filing fee to initiate your claim, which varies by state but is usually around $30 to $75. You’ll probably need to take time off from work to go to court, and expend effort and sometimes money obtaining evidence you need to prove your case.

And, of course, you’ll have to physically go to court. While the actual hearing typically only lasts around 5 to 10 minutes, there’s time spent waiting for the hearing to begin. “The wait in the courtroom for my hearing was long,” Williams said. “The people-watching and my adrenaline rush made that tolerable.”

Before you decide to go to small claims court, assess whether you want to invest the time and energy. “Be realistic about the whole deal,” Williams said. “Weigh the amount you’re owed against the time and resources it will require to take the claim to court.”

Do you need a lawyer?

You do not necessarily need a lawyer and rules vary by state regarding whether you’re allowed to be represented. However, as many as 76% of parties in small claims cases do have legal representation, despite the fact that it is supposed to be a forum for self-represented litigants.

If you don’t have a lawyer and the defendant does, you’re at a disadvantage. In Williams’ case, the defendant she was trying to collect from did hire an attorney and Williams recalled the judge’s words of caution: “As the three of us stood at the front of the courtroom to start the hearing, the judge looked me in the eye and said, ‘Ma’am, you do know you’re at a disadvantage because you do not have representation.’ I stood tall and replied, ‘But I have the truth.’”

Unfortunately, there is a risk you could lose a good case if you aren’t represented. Wilcox, for example, was initially awarded only just over half of the damages he sought, and had he not filed a request for reconsideration, he could have lost out on close to $2,000 in additional compensation he was ultimately awarded.

What are the risks and benefits of going to small claims court?

Preparing for a small claims case can be harder than other cases, because the discovery process — which allows you to obtain relevant documents the other party has and to interview witnesses who will testify on the side of your opponent — is simpler than in cases brought in other courts. As a result, you could miss out on evidence that would have helped your case.

There’s also the danger of a potential countersuit, which happens when the person you made a claim against makes a competing claim against you. If you’re suing your landlord for not returning your security deposit, for example, your landlord could turn around and countersue you by claiming you damaged the apartment.

Finally, even if you win, the court can only award you damages — if the defendant doesn’t pay, you’d have to pursue additional legal action to collect. Williams’ case illustrates the difficulty in actually getting paid. “I won in court yet never saw a dime,” she said. “The verdict had no teeth. The defendant dissolved her LLC, closed her bank and credit card accounts and all but vaporized after losing in court. I had absolutely no steam left to keep trying to track her after the gavel fell in my favor.”

If you can’t get paid, you’d be out the time and money you spent on the legal proceedings with nothing to show for it except the satisfaction of winning.

The plus side, of course, is that it is less expensive to go to small claims court than to pursue other types of lawsuits, and the process for filing court paperwork and presenting evidence is still simplified. For many of the cases brought in small claims court, there’d be no other practical remedy available.

If you’ve decided to go to small claims court, you’ll need to start the process by finding the name and contact information of the defendant. Then obtain the court paperwork and file your case in the county small claims court with jurisdiction over your case.

Next, you’ll need to attend a scheduled hearing. That could take several weeks, or even months, depending on the court schedule in the county where you file. Your case will usually come before a judge or a magistrate, who may be an attorney appointed to decide small claims cases.

Be as prepared as possible before your hearing. “Try and line up all the documents, witnesses and any information that you have regarding your case,” Wilcox said. “It is better to have too much information than not enough.” Wilcox, for example, obtained security camera footage from his Airbnb host which showed the driver leaving as he was moving his suitcase out of the car. Check out these online resources to help prepare your case.

There is typically no jury, and the judge or magistrate makes the final decision in the case, although you could file an appeal or request for reconsideration if you’re dissatisfied with the original outcome, as Wilcox did. You’ll be notified of the court’s decision either at your hearing or by mail, and will then have to try to collect the money if the judgment is in your favor. On average, it takes around 175 days for the process to be completed.

And, while you may have seen shows like Judge Judy, don’t expect your experience to be the same. “It isn’t like what you see on TV and the judges don’t care about every law. They treat you like children,” Wilcox said. “What you think is important the judge might not, so hopefully you have compelling arguments.”

If you are uncertain as to whether your case is best handled in small claims court, you may wish to schedule a consultation with a lawyer first. For many types of cases, like injury claims, you can get a brief free consultation so you can get an expert legal opinion about whether your case is one that should be relegated to small claims court or whether you’d be best off pursuing other legal remedies.

This article was originally published on Oct. 4, 2017