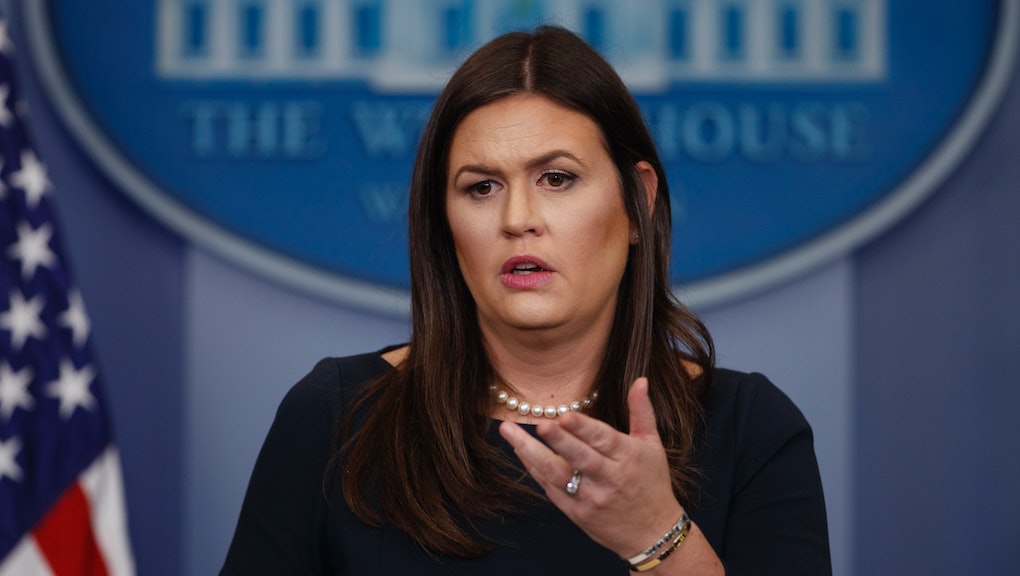 “There’s a time and place for a political debate, but now is the time to unite as a country,” Sanders told CNN’s Jeff Zeleny during the briefing. “It would be premature for us to discuss policy when we don’t fully know all the facts or what took place last night.”

Following previous mass shootings, Republicans have repeatedly argued it is inappropriate to discuss politics and policy in the immediate aftermath; Democrats often respond by accusing their colleagues of using the solemnity of tragedy to avoid the urgent crisis of gun violence.

But regardless of whether Republicans actually believe you shouldn’t invoke politics in the wake of tragedy, one thing is for sure: It has never stopped President Donald Trump from doing just that.

As NBC’s Hallie Jackson pointed out in a follow-up question, Trump immediately responded to the Pulse nightclub shooting in Orlando, Florida, by promoting his Muslim ban during the 2016 presidential campaign.

Sanders responded by arguing that political responses are OK when you’re a candidate, but not when you’re president.

“There’s a difference between being a candidate and being president,” Sanders told Jackson.

But as president, Trump has responded to tragedy the same way. When an improvised explosive device injured 18 people on a train in London, in September, Trump again tweeted in support of his travel ban.

“Another attack in London by a loser terrorist. These are sick and demented people who were in the sights of Scotland Yard. Must be proactive!” Trump wrote. “The travel ban into the United States should be far larger, tougher and more specific — but stupidly, that would not be politically correct!”

Trump has also fallen well short of Sanders’ standards when it comes to waiting for the facts.

In 2016, when an EgyptAir flight mysteriously crashed into the Mediterranean Sea, Trump immediately tweeted, “Looks like yet another terrorist attack. Airplane departed from Paris. When will we get tough, smart and vigilant? Great hate and sickness!”

Nearly a year later, evidence indicated the plane “most likely broke up in midair after a fire near or inside the cockpit that quickly overwhelmed the crew,” the New York Times reported.