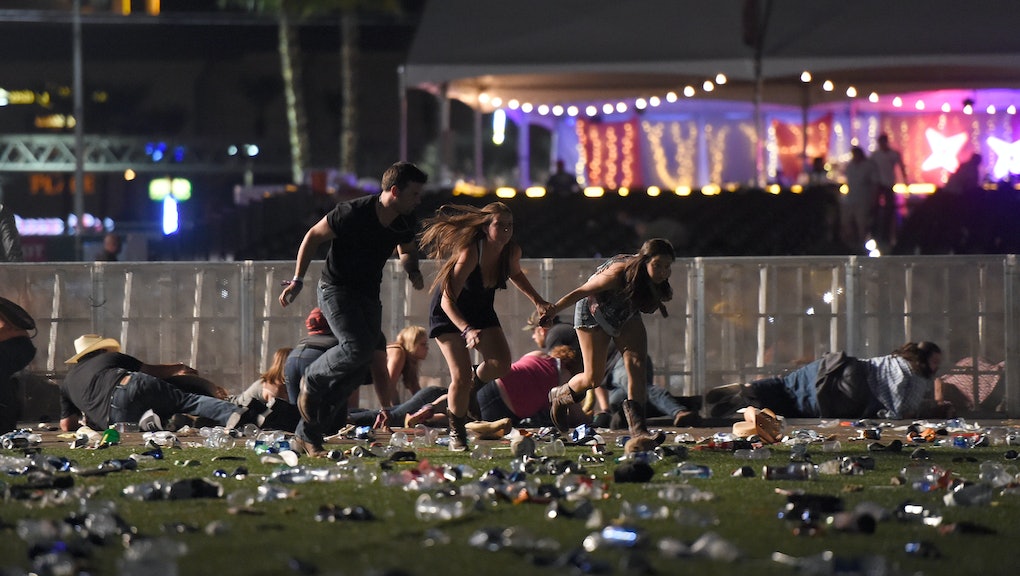 Photographer from Vegas shooting describes night of terror: “They were very fearful for their lives”

By night’s end, he ended up documenting the deadliest mass shooting in modern U.S. history, in which lone gunman Stephen Paddock, a 64-year-old resident of Mesquite, Nevada, killed at least 58 people. More than 500 total were injured during the attack.

Becker’s images capture the moments when audience members — who were watching country singer Jason Aldean perform onstage — heard gunfire, realized they were under attack and ran for cover. It’s a startling account of a night that took a sudden, tragic turn.

In a statement provided to Mic, Becker recounted what he saw on Sunday — the panic, the confusion, the violence. “It had been so dark outside I couldn’t see the details,” Becker said. “When I saw the image of the woman lying on the ground covered in blood, that was when the impact of what I was experiencing hit, when I realized people were dying.”

Read Becker’s statement in full below:

After capturing photographs of the final act of the Route 91 Harvest country music festival, I headed back to the media tent to start filing my photographs. After about five to 10 minutes, I heard very loud popping sounds and I went outside to see what was happening, and a security guy said it was just “firecrackers,” so I went back to work. The second time I heard the popping sounds, somebody said to me, “It was just speakers or sound equipment,” and again, I went back into the media tent and continued to work. Then the noises went again, and that was when the crowd started to flee.

Once the crowd started to flee, I went outside and saw a lot of people panicking and running for the exit that was right by the media tent. I grabbed my camera and went back outside and found a place where I could see what was happening and also wouldn’t be in the way of people, so I stood on a table and started to shoot — thinking to myself, still, that this isn’t really happening, it’s just the speakers popping. It was so dark I couldn’t really see what was happening; there were a lot of people crying, speaking on cell phones and ducking for cover. As the crowd thinned out I was able to go a little closer to try and see what was going on and take some more pictures, and I’m still thinking to myself, “It’s just the speakers, there is nothing going on.”

There were groups of people helping each other everywhere and a real sense of people running for cover. People were fleeing, they were panicking. The gunfire was sporadic, it would stop and then more shots, then a lull and then more shots. I could hear people yelling at them to shut off the lights, to be quiet. People were cowering, they were very fearful for their lives. A woman tripped right in front of me; a man shielded a woman with his body before I saw them both get up and run away; a man in a wheelchair was helped to an exit. I was trying to capture anything that was moving and that had good lighting. That was critical; it was so dark and there was limited lighting. It was really hard to get a sense of what was happening. At this stage I still just thought it was a speaker popping, so I was trying to capture people’s emotions and a sense of the panic that was around me.

I went back into the media tent and called my colleague to see if he could find out what was happening, as I still didn’t know what was going on, and he said that he had found out that the police had called a Code Red and set up a perimeter. It was then I started looking at my photographs and what I was seeing was just unbelievable. It had been so dark outside I couldn’t see the details, I just saw a lot of people laying on the ground thinking they were playing possum, but now I could see people covered in blood and I thought, this is real. When I saw the image of the woman lying on the ground covered in blood, that was when the impact of what I was experiencing hit, when I realized people were dying.

I kept editing and filing my photographs; the power had been cut so I was working off the light of my laptop, until after [five to 10 minutes] everyone was evacuated and I was escorted to my car. I worked the rest of the night and into the morning capturing the police officers moving in and the wounded helping each other on the streets.

When I stop and think, it’s hard to comprehend what I witnessed. I was on autopilot, just doing my job capturing what was happening, which I think is important. Impactful images like these tell a story; they move people to think twice about doing anything like this, they move governments to change policies to prevent horrific acts like these happening again. I’ve been doing this work for many years and it is instinct to photograph first and ask questions later. It probably seems irrational to just walk out and take pictures of people running for cover, but that is second nature for a photojournalist.