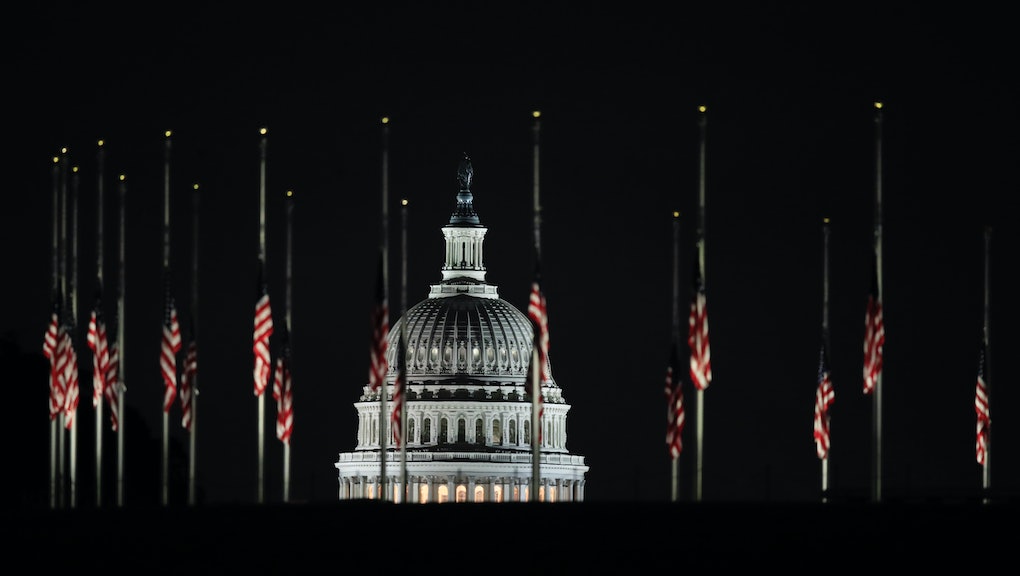 Every day, we bring you a different dispatch on Trump’s America. Today’s focus: Why change is not likely.

A day after the deadliest mass shooting in modern U.S. history, the narratives are familiar.

Republicans have offered their “thoughts and prayers” to victims. Some Democrats decried those statements as “not enough” and advanced progressive proposals to reduce access to high-caliber, semiautomatic firearms that have been used in mass shootings.

Over the next week or more, a notable Republican or two may say they are open to gun control legislation. Some moderate Democrats may join progressives in demanding action. But if past is prologue, nothing will change.

If there has been a recent political constant in Washington, it is that Congress does not restrict access to guns. Why? Because the hurdles to gun control legislation are almost too many to count. But let’s name as many as we can.

“Gun owners made this election happen.” That was what National Rifle Association leader Wayne LaPierre said in a video message, released shortly after the presidential election, of his organization’s 5 million members. The NRA spent $30.3 million supporting President Donald Trump and $20 million supporting six Senate Republican candidates, five of whom won.

The NRA was a consistent Trump backer. After winning the NRA’s endorsement in May, the group stuck with Trump through all his controversies in 2016. Trump is known to reward loyalty — and he frequently cited the “Second Amendment” as a reason to vote for him.

A majority of Trump supporters do not want a ban on assault-style guns or high-capacity clips. A poll from August 2016 did show majorities of Trump supporters would support increased background checks on gun sales, but broader gun restrictions are not supported by most Republicans.

Trump won 62% of the vote in rural counties. Democrats took barely a third of votes cast there. And more than half of people in rural areas said in 2014 they have a gun in their home. Many Republicans view these voters as their base, a group they’re not likely to aim to alienate.

Gun rights groups see an ROI. Earlier this year, the NRA said Trump had championed Second Amendment issues in his first 100 days. And they’re seeing the advance of gun-friendly legislation. After eight years of a president who would have supported some version of gun control legislation, gun rights groups are not likely to take their foot off the gas.

To be clear, imposing stiffer gun control laws would not necessarily have kept the suspected shooter, Stephen Paddock, from carrying out the attack. He was a wealthy, white Nevada resident who did not have a record of mental illness nor criminal activity. But the point of laying out these hurdles is to demonstrate that even if you believe gun control is the answer, its path to passage in Washington is exceedingly rocky.

Paddock had 42 guns and numerous high-capacity magazines — all purchased legally — in his Las Vegas hotel room and home 80 miles outside the city, a uniquely American arsenal in size and scope among developed countries.

In sum: Republicans believe gun owners are their base. They receive outsized support from gun rights groups, and hear regularly from their lobbyists in Washington. Conservative grassroots groups and media arms are entrenched to defend gun rights. And Trump has been a staunch Second Amendment champion.

Today’s question: Are there any reasons I’m missing as to why gun control is not likely to advance in Washington in the wake of this mass shooting? Please email us at trumpsamerica@mic.com.

CNN has profiles of some of the at least 59 people who were killed in the shooting. More than 527 people were injured.

Police have not yet found a motive for the attack.

A gunstock, which the shooter uses to stabilize the firearm that would support automatic gunfire was found in the hotel room, suggesting Paddock had modified a semiautomatic gun to fire continuously. And the New York Times said audio of the shooting suggests the use of automatic gunfire.

In 2017, 461 people have been killed in mass shootings. Mic spoke to a terrorism expert on what it would take for the Las Vegas shooting to be labeled a terrorist attack.

White House press secretary Sarah Huckabee Sanders said the shooting should not be politicized. And Democrats are calling for gun control measures — and not participating in moments of silence.

Bill O’Reilly called the shooting “the price of freedom.” Facebook and Google’s algorithms prioritized fake news in the immediate aftermath of the shooting. And Islamic State group took responsibility for the attack, a false claim that leading media outlets repeated.

In other news: 10 million people in the United States saw the 3,000 Facebook ads purchased by a Russian ad agency during the 2016 presidential campaign. Those ads were focused on stoking division along racial and social divisions.

The Trump administration is considering an executive order that would review how to alter low-income assistance programs.

The House will vote Tuesday on a bill that would ban abortion after 20 weeks of pregnancy, drawing alarm from pro-choice groups.

Former Rep. Gabby Giffords (D-Ariz.), a gun violence survivor, spoke out on Monday afternoon and called on Congress to take action on gun control legislation. Tap or click below to watch the video.