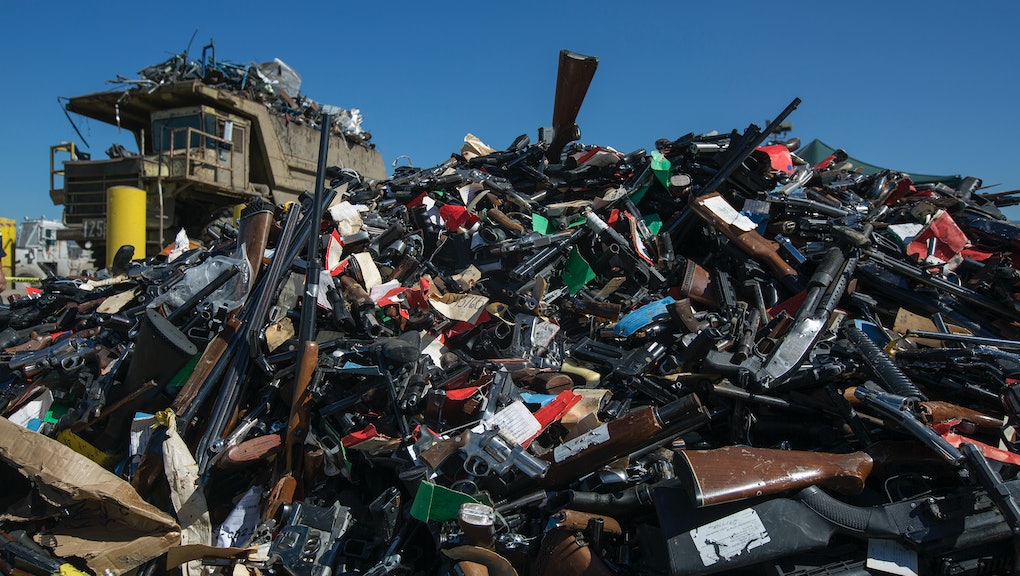 But if lawmakers really want to prevent future mass shootings, most research suggests they’ll have to go a lot further than what’s already popular. In fact, it will have to go further than any policy in modern U.S. history ever has.

“In my state of Connecticut, which has expanded background checks and requires issued handgun permits, gun crimes have dropped by 40%.” Murphy wrote.

But the evidence these policies really have the effect advocates claim is mixed.

For instance, the 40% drop in Connecticut gun crimes Murphy referenced actually coincided with a precipitous drop in national gun crimes over the same period — despite the fact most other states did not take similar measures to curb gun violence.

This isn’t to say expanded background checks would have absolutely no effect on gun violence. According to one study, about 13% of purchased firearms in the United States are obtained without a background check. And even without concrete evidence of the policy’s effectiveness, it stands to reason that creating more barriers to gun purchases would have some impact on the rate of gun crime.

But over 80% of guns used in mass shootings are obtained legally, and legal gun owners are responsible for just 18% of the nation’s gun crimes. Given that, it’s doubtful that in a nation with more than 300 million guns, increased background checks would do enough to keep dangerous weapons out of the wrong hands.

The same is true for other policies Democratic lawmakers frequently propose.

One popular idea is the belief that we should focus on keeping individuals with mental illness from obtaining firearms. While this policy is often proposed with the best of intentions, some experts say it would have a minor impact on gun violence at best — and, at worst, could result in a slew of unintended discriminatory consequences.

“I say as loudly and as strongly and as frequently as I can that mental illness is not a very big part of the problem of gun violence in the United States,” Jeffrey Swanson, professor of psychiatry at Duke University, told the Atlantic in 2016.

Similar problems arise when considering another popular Democratic policy: banning people on the federal no-fly list or terrorist watchlist from purchasing firearms. Civil liberties advocates say both could lead to increased discrimination against Muslim Americans by bolstering a surveillance program that is already rife with problems. They argue those risks are not worth taking to try preventing a relatively small portion of the population from owning guns.

Perhaps the only policies floated by Democratic lawmakers that could make a significant difference in preventing mass shootings are the more ambitious proposals to ban assault weapons and high-capacity magazines.

In particular, a ban on assault rifles is perhaps the one supported gun control proposal where there are extant examples of its potential effectiveness.

The most popular example of an effective assault weapons ban is Australia, where the government implemented a ban on assault weapons in most cases after a 1996 mass shooting. In the two decades that followed, Australia didn’t experience a single mass shooting in which a perpetrator killed five or more people.

But here, too, Democratic proposals tend to fall short of the intended result. That’s because when it comes to banning assault weapons, the devil is in the details.

Around the same time as Australia, the United States implemented its own assault weapons ban, but experts were unable to attribute any of the drop in gun violence to that specific law — because, unlike Australia, the U.S. policy was riddled with loopholes, like grandfathering in old weapons and magazines and exempting certain models.

Whats more, Australia did something the United States didn’t — they destroyed a large portion of the country’s existing guns. Through a nationwide buyback program, Australia was able to remove 20% of its existing stockpile of firearms. Yet recent proposals for a new assault weapons ban in America have erred toward resurrecting previous legislation as opposed to learning from Australia’s example.

There is no doubt an Australian-style program would be much harder to implement in the United States. In addition to the significantly larger stockpile of weapons here, 11 states have passed laws making it more difficult for officials to seize or destroy firearms, including policies to ban the destruction of firearms by law enforcement. The same goes for curbing gun violence more broadly: Seventy percent of gun murders in this country are committed using handguns, possession of which Supreme Court precedent makes very hard to regulate.

But if Democrats and gun control advocates are serious about truly ending mass shootings in the United States, they’ll have to get a lot more ambitious.