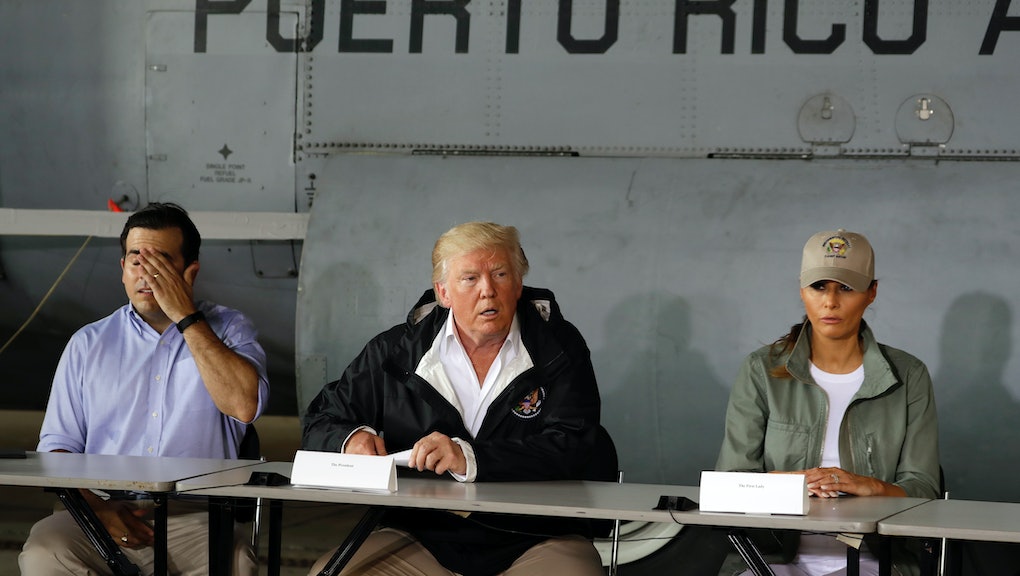 President Donald Trump held a bizarre roundtable Tuesday after landing in Puerto Rico to survey the island after Hurricane Maria. During his brief remarks, he praised his cabinet secretaries for their hard work, before telling Puerto Ricans that the devastation caused by the storm has thrown the federal budget “out of whack.” He later added that Puerto Ricans “should be proud” that their hurricane has, thus far, resulted in fewer fatalities than Hurricane Katrina in 2005.

“Now, I hate to tell you, Puerto Rico, but you’ve thrown our budget a little out of whack, because we’ve spent a lot of money on Puerto Rico, and that’s fine,” Trump said.

Trump went on to praise the response teams that helped keep the hurricane’s death toll down, saying that Hurricane Maria killed 16 as opposed to “the thousands” Hurricane Katrina killed. The official death toll for the 2005 hurricane that devastated New Orleans and much of the Gulf Coast was just more than 1,800.

“Every death is a horror,” Trump said. “But if you look at a real catastrophe like Katrina and you look at the tremendous hundreds and hundreds and hundreds of people that died, and you look at what happened here with really a storm that was just totally overpowering — nobody’s ever seen anything like this — what is your death count as of this moment, 17? Sixteen people certified. Sixteen people versus in the thousands, you can be very proud of all of your people all of our people working together.”

It has been six days since the death toll was updated and experts expect the number will climb much higher in the days to come, when the government can update its records.

Trump also told the group assembled at the briefing that the U.S. is ordering “hundreds of millions of dollars” worth of new planes for the Air Force, which seemed to run counter to his statement about the affect the storm will have on the federal budget.

“Amazing job,” Trump told an Air Force official at the briefing. “So amazing we are ordering hundreds of millions of dollars of new airplanes for the Air Force, especially the F-35.”

He also went around the table thanking Puerto Rican officials who have praised him for the hurricane response.

He also praised former WWE CEO and current Small Business Administrator Linda McMahon for building a “great company,” but he did not say anything about the San Juan Mayor Carmen Yulín Cruz, whom Trump attacked on Twitter over the weekend.

Trump is also scheduled to meet with victims of the hurricane while in Puerto Rico and will receive briefings from government and military officials helping coordinate storm response. After that, he’ll head back to Washington, D.C.