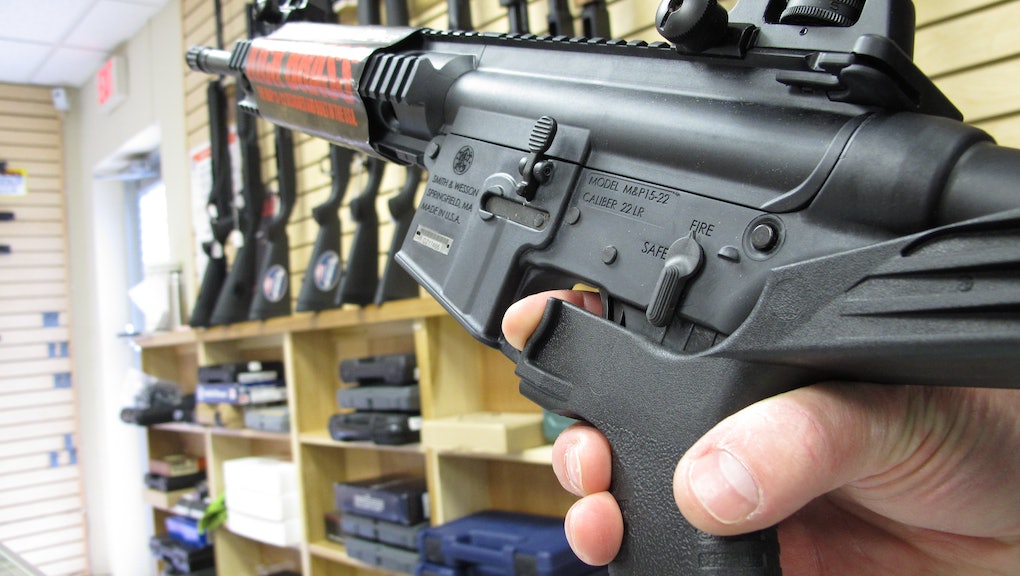 Bump stocks were supposedly made for disabled people. That’s not how they’re actually being used.

“Bump stocks,” an add-on accessory for semi-automatic weapons, are being thrust into the national spotlight after they were used in Sunday’s deadly shooting in Las Vegas.

The tool enables a semi-automatic weapon to mimic the speed of an automatic one, which are largely restricted to the general public. Bump stocks replace a gun’s stock with a sliding stock and trigger guard, NBC News reported. The shooter’s finger comes in contact with the trigger by holding the pistol grip with one hand and pushing forward on the gun’s barrel with the other, according to the Associated Press, which allows the recoil action after the gun is fired to move the gun back and forth, “bumping” the shooter’s finger against the trigger at a high speed.

Following the Las Vegas shooting, 12 of these bump stocks were discovered on firearms in the hotel room of Stephen Paddock, the suspected shooter, CNN reported.

But why were these deadly tools made in the first place? Supposedly, the devices were invented in 2010 to better enable those with disabilities to shoot a gun, according to the AP.

In a 2010 letter from the Bureau of Alcohol, Tobacco, Firearms and Explosives to leading bump stock manufacturer Slide Fire Solutions, ATF noted that according to Slide Fire, the device “is intended to assist persons whose hands have limited mobility to ‘bump-fire’ an AR-15 type rifle.”

A similar claim was made by another manufacturer, Bump Fire Systems, according to the Los Angeles Times.

Though manufacturers may cite accessibility as the reason behind the device to the government, the bump stock wasn’t necessarily created with a disabled demographic in mind — even by the admission of its inventor.

In a 2016 interview with Ammoland, Slide Fire inventor Jeremiah Cottle said he developed the Slide Fire stock “to make bump firing safer and more controlled,” and that the product was geared not to a disabled population, but rather to “people, like me, [who] love full auto.”

Similarly, in an interview with Guns America in 2011, Cottle said the product’s speed, not accessibility, when discussing what the bump stock could accomplish.

These able-bodied gun owners seeking speed — and the feel of an automatic weapon — are apparently the device’s primary market. North Carolina gun store manager Dorothy Royal told the AP in 2013 that while she does sell bump stocks to wounded veterans, an estimated 70% of her buyers have no visible disability.

“In the last 25 years that I’ve been working with [machine guns] there hasn’t been anything that really gave you something you would think was close to a full auto. Until now,” YouTube user BigShooterist said about the bump stock in a video quoted by the Trace.

Though it’s illegal to modify internal components of semi-automatic weapons to make them automatic, the BBC noted, adding attachments to fire more quickly is allowed.

“The stock has no automatically functioning mechanical parts or springs and performs no automatic mechanical function when installed,” the ATF’s letter to Slide Fire Solutions noted in declaring the device’s legality. “Accordingly, we find that the ‘bump-stock’ is a firearm part and is not regulated as a firearm.”

“A lot of discussion was made over it, and there was a lot of thought put into it,” Richard Vasquez, the former acting chief of the Firearms Technology Branch of the ATF, told the Times about the decision to allow bump stocks. “When we looked at it … we could not fit it into the definition [of a machine gun].

“That’s all a government agency can do, because Congress writes the laws,” Vasquez said.

In the wake of the attachment’s use in the Las Vegas shooting, however, that legality could soon change. Sen. Dianne Feinstein (D-Calif.) introduced a bill Wednesday that would ban the sale and usage of bump stocks and other devices that allow semi-automatic weapons to mimic automatic ones.

Though Feinstein introduced a similar measure in 2013, which ABC News reported failed in a Senate vote of 40-60, there are signs that her renewed effort could potentially garner bipartisan support.

“I think it’d be a good time to have a hearing,” Sen. Lindsey Graham (R-S.C.), told NBC News about bump stocks and similar devices. “Just find out, ‘How does the technology work?’ and is there a legislative solution.”

Sen. Dean Heller (R-Nev.) also said it may be worth looking into how these now-legal attachments can be outlawed in the wake of the deadly Las Vegas attack.

“One of the concerns that I have is the ability to manipulate a semi-automatic rifle and turn it into a fully automatic rifle,” Heller said, according to NBC News. “There has to be a way to be able to stop this.”