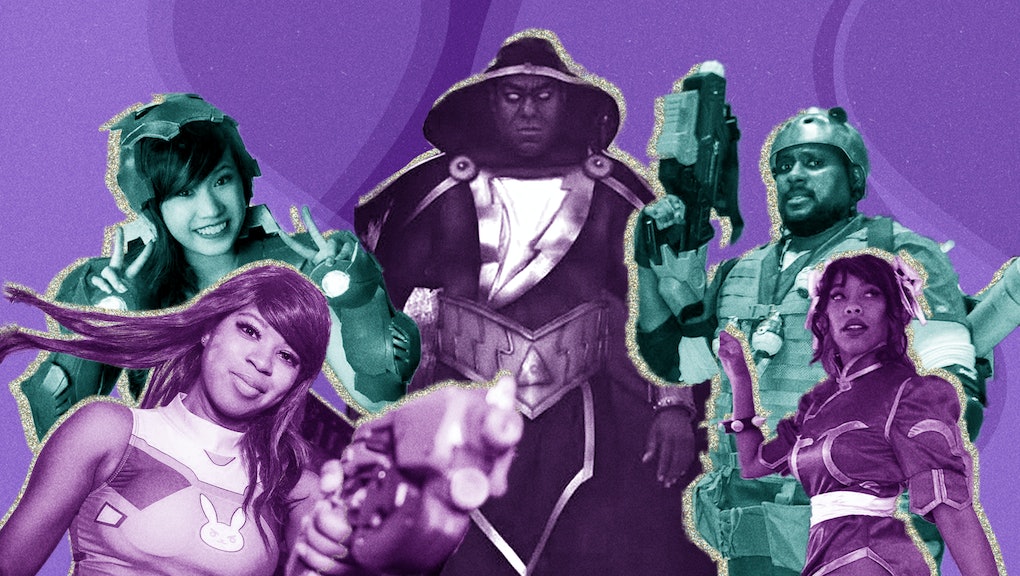 There is no New York Comic-Con without cosplay. The tradition of dressing up as your favorite characters from TV, movies or comic books started to catch on back in the 1930s and continues to this day. It’s like Halloween but way geekier and more intense.

Cosplay is popular with all types of people, but primetime TV and Marvel movies don’t always provide fans with characters of color they can idolize — forcing them to default to cosplaying white characters. Cue the online abuse and harassment.

We spoke with five cosplayers of color about the unique challenges they face — fighting to have their craft taken seriously while courting sponsors who would rather fund more “mainstream”-looking cosplayers who, say, “fit a certain look.” But that won’t stop them.

What do you cosplay as when superheroes don’t look like you?

Nate the Great: I definitely used to get caught up in the whole race thing.

Krissy Victory: If you wanted to stay in the safe zone and just cosplay black characters, there’s literally only so much you can do before you have to stand out. Because you can’t keep doing the same character forever.

Nate: For a while I tried to find characters as close to me as possible: big guys who were also black. But there’s a lack of characters that fit that kind of description. Then I realized cosplay isn’t about being exactly that person; it’s representing that character in the best way you can.

Kiera: I’m glad we’re starting to have more black characters to pull from. I’m glad we have shows like the one from Tyler, the Creator or Jaden Smith on Neo Yokio, where the main characters are black. I think there needs to be more representation, so people who don’t feel comfortable cosplaying other folks have someone who they can identify with.

Nate: When I first started I had that mindset that if you want to cosplay Wonder Woman you have to have a particular build. That was a young and naive of me.

Krissy: A lot of people didn’t want me to be D.Va. All the stuff people were saying was pretty toxic, and I can’t really blame anyone for feeling that way. I was just so addicted to the character that I couldn’t not cosplay her. Our behavior is so similar; it would feel like a crime.

Nate: I’ve seen black Captain Americas. I’ve seen white Elenas from Street Fighter. I’ve seen Hispanic Symmetras from Overwatch. It doesn’t matter what you are, but how you represent the character.

Kiera: I choose people based on their personality or on what they stand for or represent in this film/show.

Krissy: The backlash is the crappy part, and I know that’s what pushes people away [from the scene]. But you should cosplay as whoever you want. Don’t be afraid to.

Nate: I said, fuck it! Ganondorf is green. Blastoise is a turtle, but whatever — I like them anyway, so I became them.

Krissy: Usually when cosplayers post online or get posted to places like [Facebook group] Overwatch Hell, [fans] are excited and they’re saying all these wonderful things. But if someone is black, [the response] is always bad, something really shitty. I don’t even look forward to it because I always know the results.

Risa Chan: It’s interesting. There’s the reaction you’ll get in person and then there’s another reaction you’ll get online. In person, it’s like having an alter ego. Folks will shout “Hey Genji!” when I’m dressed up — it’s the most rewarding feeling ever. But then, of course, in person you don’t receive as much criticism as you do online. It’s so much easier for people to criticize you when they’re behind a computer. The community online expects you to look just like the character, which in itself is an impossible standard.

Krissy: I get comments ranging from “Brown D.Va ruins everything” to “Burnt D.Va” to “Why does she have to be black?” and worse. It’s always online and never in person.

Risa: They’ll judge my costume and props but also criticize me by saying my face doesn’t look like a certain character’s face — which is obviously something I can’t change.

Krissy: Those types of people shouldn’t have the perks of being on a cosplay page. They should be straight-up banned.

Lisa: I do consider everything folks say, but I know that I can’t take it all too seriously.

Krissy: It’s difficult to get sponsors sometimes. Especially with black cosplayers. Few get free costumes or promotion from a certain brand. At times, it seems like we’re forgotten.

Nate: The ones who have been able to make cosplay their profession are white or fit a certain look. The famous cosplayers everyone knows off the top of their head, like Jessica Nigri … tend to be white.

Risa: Sex sells. People complain when cosplayers dress scantily clad, but those are the ones who get the most attention. When you dress in more clothing, the cosplay gets ignored. It’s a tough balance.

Krissy: [Sponsors] completely ignore many of us because were not marketable enough for them. It’s a numbers game. If you don’t have the right numbers, it’s hard to get [the sponsors] to care.

Nate: Folks who look too different, whether it be race or build or both, are characterized differently: “Oh, they’re just having fun; they’re not serious.” Cosplay should always be fun, but these folks also put serious time into their costumes. Don’t dismiss them.

How to cosplay when you’re broke as a joke

Kiera: Costs definitely add up. When I first got into cosplay, I didn’t have a big budget.

Lisa: I like to cosplay characters that offer a fun challenge in building armor, if only because the costume ends up standing out more. Experimenting with different materials makes you realize you can always make things cheap.

Kiera: The expensiveness of cosplay is a big reason why I’ve done a lot of closet cosplay. You can go into your closet and literally cut off the sleeves of something and buy or manipulate something you already own. I wanted to find characters that had everyday looks but that people would recognize on the spot. Like Tina from Bob’s Burgers — you’d recognize it right away even though it’s just a blue skirt and converses and glasses.

Risa: Craft foam like EVA is often used to make armor-type outfits and comes really cheap. A pack of foam goes for about $15 to $20. With just a pack of four you’re able to make a heckload of armor. That coupled with thrift stores and getting things you can modify, like boots, shirts and more, let you cosplay on the cheap.

Knightmage: I’ve done over 120 costumes, from Link to Luke Cage, and been to over 150 conventions, but cosplay isn’t my career. My full-time job is in law enforcement. My main job pays for the costumes, so the signed prints I hand out at conventions are free. The conventions generally pay for me to attend, along with hotel and travel, so the money I raise can go straight to charity.

Any superhero can tell you it’s important to give back

Knightmage: I just ask for donations and 100% of the proceeds go to charity. I work with the Make a Wish Foundation because it has chapters all over. Raising money is awesome, but I like to go a little more hands-on, at children’s hospitals or libraries.

Aside from Make a Wish, I’ll do things like the recent buddy walk for Down syndrome … or go to libraries and read to the kids. Every Christmas, me and my friend SuperKayce will do a holiday tour and go to rescue missions to raise money there, too. I get to travel for free while helping out the community. I see it as a win-win.